The Nation published the article "In Defense of MAE WEST" written by Joseph Wood Krutch [1893 — 1970] in their issue dated for Wednesday, 30 September 1931.
• • The erudite columnist appreciated Mae's "personality" and, though he felt her current play was "simple-minded, lurid, and crude," 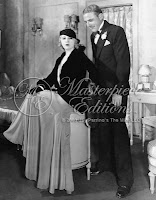 he emphasized that it was better than many other plays "because it is at least not dull with that discouraging, anemic dullness characteristic of half the respectable plays produced on Broadway.  It is dramatically as sound and intellectually as respectable as a play like Belasco's 'Lulu Belle' which ran for a year in one of our temples of art."  Krutch concluded "if someone will arise to proclaim in appropriate style that 'they ain't done right by our Mae,' I, for one, will whistle and stamp my feet."
• • Many writers agreed with Mr. Krutch, who applauded Mae West as an antidote to Mrs. Grundy and Anthony Comstock.
• • Here's an excerpt from one reaction printed in the Harvard Crimson: Joseph Wood Krutch defending Mae West in a recent issue of "The Nation" was the author of some extremely pertinent remarks concerning that simple-hearted lady, remarks which bear on certain aspects of American culture which cannot be emphasized too much. Mentioning the play, written and acted by Miss West, as sound though crude dramaturgy, he went on from the play ["The Constant Sinner"] to criticise the audience.
• • American audiences in general and Mae West's audiences in particular have a unique and proverbial capacity for smut. As Mr. Krutch pointed out, this capacity is also shared by adolescents. Mr. Smoot of Utah probably knows more about pornographic literature than any living American, or European. However, in spite of this hearty endorsement, it cannot be repeated too often that this capacity and this knowledge is not a prime requisite for holiness. Hunger, not holiness, must be the explanation of this strange preoccupation with sex in its cruder forms.  ...
• • Fitzroy Davis [27 February 1912 — 30 September 1980] • •
• • One of Mae West's least favorite motion pictures was "The Heat's On" [1943].
• • It was Fitzroy Davis who got screenwriting credit for this mish-mash, a film so disjointed and disappointing that The New York Times review led off with this sally: "The heat is definitely off!"
• • Fitzroy Davis, an odd hyphenation of actor-singer-novelist, was born in Evanston, Illinois in the month of February — — on 27 February 1912. He made his stage debut in November 1935 in Chicago. A minor walk-on role was available for a "Romeo and Juliet" production starring Katharine Cornell as young Juliet. By 1942 his first novel Quicksilver had appeared in print. This roman a clef deals with a road company touring the USA in "Romeo and Juliet." There are four gay characters in the story including the lead actress. Hmmm. During the 1960s, Fitzroy Davis penned articles for gay publications in Switzerland using the pen name Hadrian.
• • Fitzroy Davis died in Putnam, Connecticut on Tuesday, 30 September 1980.  He was 68.
• • On Saturday, 30 September 1911 • •
• • On Friday, 22 September 1911, 18-year-old Mae West was in the spotlight. On that date, "A La Broadway" had opened at the Folies-Bergere Theatre, New York, NY. This short-lived revue (produced in an expensive venue) closed on Saturday night, 30 September 1911.
• • Variety noted on September 30th: "Folies Bergere Experiment Reaching an End."
• • On Sunday, 30 September 1934 • •
• • Andre Sennwald wrote an article "Lines for a Mae West Scrapbook." It was published in The New York Times on Sunday, 30 September 1934.
• • On Saturday, 30 September 1944 • •
• • On Saturday, 30 September 1944 Mae West, who was playing the Empress of Russia, moved her show "Catherine Was Great" from the Shubert Theatre to the Royale, the playhouse that had originally welcomed Diamond Lil and her boisterous Bowery hijinx in 1928.
• • In Her Own Words • •
• • Mae West said: "I did not change my way of life. I harmed no one. I had a philosophy, an idea of how to live fully and in my way.  I believed in it as fully and as strongly as I believed in being an American."
• • Quote, Unquote • •
• • An article about the Oscars mentioned Mae West.
• • The N.Y. Times wrote: Mae West and Rock Hudson stole the interlude, if not the entire show, with their suggestive singing." ...
• • Source: The N.Y. Times; published on 27 March 1958

• • By the Numbers • •
• • The Mae West Blog was started eight years ago in July 2004. You are reading the 2443rd blog post. Unlike many blogs, which draw upon reprinted content from a newspaper or a magazine and/ or summaries, links, or photos, the mainstay of this blog is its fresh material focused on the life and career of Mae West, herself an American original.
• • Come up and see Mae every day online: http://MaeWest.blogspot.com/
________
Source:http://maewest.blogspot.com/atom.xml

Glamorous Gams contestant Kristy Weaver will appear as MAE WEST on Saturday, 29 September 2012.
• • When she's not lending a hand to a fundraiser for The Children's Center, blonde and beautiful Kristy Weaver works for a bank in Vancouver, Washington.  Many raffle prizes are being offered in support of this worthy cause. Even if you do not attend Saturday evening's event at the Hilton Vancouver in Washington, you could still win in the drawing.  You are asked to donate $25 per ticket and write "Mae West Raffle" in the "purpose" field.
• • The Children’s Center serves the mental health needs of children and families of Clark County, Washington and the "Mae West Raffle" will provide needed funding.
• • Nils T. Granlund [29 September 1890 — 21 April 1957] • •
• • Born in Sweden on Monday, 29 September 1890 but raised in the USA, Nils T. Granlund was a Broadway show producer, radio industry pioneer, and also a publicist for Marcus Loew who formed Loews Theatres and Metro-Goldwyn-Mayer (MGM). So well known that he went by his initials N.T.G., this powerhouse was Mae West's publicist and he also attended her wedding when she married Guido Deiro.
• • On 21 April 1957, the world received the sad news that Nils T. Granlund had died in a taxi accident in Las Vegas.
• • On Tuesday, 29 September 1914 • •
• • The newspaper the Philadelphia North American reviewed the more prominent variety artists who were performing onstage in the City of Brotherly Love on Tuesday, 29 September 1914. The arts critic thought well of Mae, who was then calling herself "The Original Brinkley Girl." When he referred to her stage act, he called her a "nut comedienne."
• • On Friday, 29 September 1933 • •
• • It was on Friday, 29 September 1933 that Mae West signed the Release Dialogue Script form for her very successful motion picture project "I'm No Angel" for Paramount Pictures. Mae West was paid for the film's treatment, story, and screenplay.
• • Julien's Auctions sold this autographed Release to a fan for $128.00.
• • On Tuesday, 29 September 1936 • •
• • "Go West Young Man" starring Mae West (as the man-eating movie marquee marvel Mavis Arden) was released in the USA on 18 November 1936.
• • The production began in early August at General Service Studios and was all wrapped up on Tuesday, 29 September 1936.
• • On Wednesday, 29 September 1971 • •
• • On Wednesday, 29 September 1971 Mae West wrote a letter to comedian Groucho Marx.  Mae wrote (in part), "I've always been crazy about your crazy comedy. I remember how I howled watching your rushes in the projection room at Paramount, when I was there too, waiting to watch my own. ... I have to tell you you're the greatest of all the funny men ... whenever you're in L.A. come up and see me."
• • Price realized by Christie's auction was $2,530.
• • In Her Own Words • •
• • Mae West said: "It was not that I was jaded. It was only that I had no answers to serious things."
• • Quote, Unquote • •
• • An article about Faye Dunaway mentioned Mae West.
• • According to The Advocate, Variety reported that Faye Dunaway will play Mae West in the upcoming film "The Calling." Although West is considered an icon of outspoken sexual expression, her own sexuality remains a subject of conjecture (sic) — — in recent interviews, Mae West's "Myra Breckinridge" costar Raquel Welch maintains her conviction that West was really a man. ...
• • Source: Article: "Faye Dunaway to portray Mae West" written by staff for The Advocate; published on Saturday, 29 September 2001

• • By the Numbers • •
• • The Mae West Blog was started eight years ago in July 2004. You are reading the 2442nd blog post. Unlike many blogs, which draw upon reprinted content from a newspaper or a magazine and/ or summaries, links, or photos, the mainstay of this blog is its fresh material focused on the life and career of Mae West, herself an American original.
• • Come up and see Mae every day online: http://MaeWest.blogspot.com/
________
Source:http://maewest.blogspot.com/atom.xml