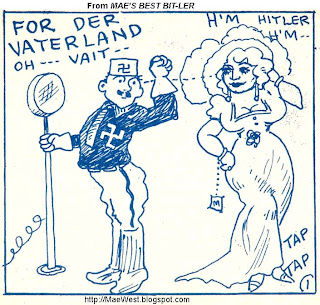 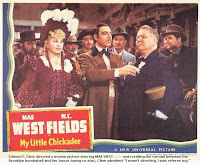 A young actor was featured in "My Little Chickadee" [1940] starring MAE WEST.  Do you recall Jackie Searl?
• • Born in Anaheim, California on 7 July 1921, John E. Searl began his silver screen resume with "Daughters of Desire" [1929], a silent movie, as Jackie Searl when he was a lad of eight.
• • The clean-cut freckled blond was a bratty counterpart to child actress Jane Withers. Cast in 94 productions for the cinema as well as in guest-starring bits on TV (1960 — 1969), Jackie found it easier to attract attention during the pre-WW2 era.
• • Jackie Searl continued playing secondary parts into his teens with roles in "Ginger" [1935], "Little Lord Fauntleroy" [1936], "That Certain Age" [1938] and "Small Town Deb" [1941].  He was seen in a minor role (Boy) in "My Little Chickadee" when he was 19.
• • Searl never made it as far as Freddie Bartolomew, who took the title role in "Little Lord Fauntleroy" — — a role once played on stage by a young Mae West.
• • After fulfilling his military obligations, Jackie Searl tried to recharge his Hollywood heyday. Then during the 1960s he made some inroads into small screen turf; he guest-starred on TV shows such as "Lassie," "Perry Mason," "Rawhide," and others.
• • Jackie Searl died in Tujunga, California in the month of April — — on Monday, 29 April 1991.  He was 69.
• •  Duke Ellington [29 April 1899 — 24 May 1974]  • •
• • On the birthday of Edward Kennedy "Duke" Ellington — — born at the end of April in Washington, D.C. — — it is interesting to recall how hard Mae West had to wrestle with Paramount Pictures to get the musician into her film "Belle of the Nineties."
• • Always the champion of the African-American talents she met, Mae insisted that the studio hire him to play and also appear in the movie. The studio didn't want to hire Ellington, at first, because they said the famed Cotton Club headliner would be "too expensive." When Paramount finally gave in to Mae, they agreed to let Ellington and his orchestra play — — however, they insisting on having all white musicians on the set.
• • Mae West marched into the head office at Paramount and said, "White men can't play black music in my picture!" And it was done. Ellington and his band were used and shown onscreen, thanks to Mae (who refused to budge on this).
• • "Belle of the Nineties" was in production from 19 March 1934 until June 1934.
• • Born in Washington, D.C. on 29 April 1899, Duke Ellington died on 24 May 1974 in New York City.   He was 75.
• • On Monday, 29 April 1935 in the Cornell Daily Sun • •
• • The caption read: Autograph seekers drive Miss Lyn Olson (above), 22-year-old beauty parlor operator of Milwaukee, Wisconsin, "crazy" because she resembles Mae West, blonde screen actress of many marriage licenses. And the Associated Press b/w photo reveals so startling a likeness that Lyn Olson could have had a second career as a Mae West look-alike.  Were Lyn's eyes blue, too? [Source: page 6 of Cornell Daily Sun, Volume 55, Issue 154, on Monday, 29 April 1935.]
• • On Friday, 29 April 1938 in the Boston Herald • •
• • Beantown readers were treated to this titillation on 29 April 1938, announced with a boldface headline:  Clutching, Squealing Crowd Greets Mae West with Mob Scene Here.
• • The Boston Herald reporter wrote: Complete with the publicized curves and husky, slurring accents that have made her practically a symbol of what she is pleased to call “the sex personality,” Mae West crashed into Boston yesterday morning through a clutching, squealing crowd of 3000 eager admirers who turned the South station into a mob scene.
• • The Boston Herald reporter noted: Cries of pain mingled with shouts of “There she is!” and “Give us a smile, Mae!” as the mob, in a surging onslaught, trampled on toes and barked shins to get closer to the object of it all. The plump blonde actress, in a trailing satin dress, with make-up thick on her features and a huge bunch of orchids clutched in a heavily jeweled hand, gave them the smile and was taken off to the Ritz-Carlton, where she is staying while appearing in person at the RKO Boston Theater this week.
• • On Saturday, 29 April 1950 in Pittsburgh • •
• • Pittsburgh's Mayor David Lawrence and Mae West shared the stage of the Nixon Theater on Saturday night, 29 April 1950, after the final performance of her play, "Diamond Lil." The 47-year-old playhouse was booked for bulldozing, making way for the new headquarters of the Aluminum Company of America.  Tsk.  But what do the citizens of Pittsburgh know about the magnificence of the theatre arts anyway?
• • On Sunday, 29 April 1984 in The N.Y. Times • •
• • N.Y. Times reporter Francis X. Clines was reviewing Peter Conrad's book and gave his 29 April 1984 column this spunky title: "Walt Whitman's and Mae Wests's New York."
• • In Her Own Words • •
• • Mae West said: "A dame that knows the ropes isn't likely to get tied up."
• • Quote, Unquote • •
• •  An article on broads mentioned Mae West.
• • Meta Wagner muses: It’s amazing to me how the quips Mae West famously uttered still serve as quotable quotes today: “Is that a gun in your pocket, or are you just happy to see me?” “When I’m good, I’m very good, but when I’m bad, I’m better.” “A man in the house is worth two in the street.” Now, that’s a broad! . . .
• • Meta Wagner adds: Currently back on Broadway is "South Pacific," the World War II-themed musical that immortalized a catchy number "There Is Nothing Like a Dame." Mae West was a swell dame (not to mention a triple A-all-right broad).   . . .
• • Source: Article: "Vox Pop: Broads Don’t Blog, Especially in Haiku" written by columnist Meta Wagner for the website PopMatters; posted on 29 April 2008
• • By the Numbers • •
• • The Mae West Blog was started seven years ago in July 2004. You are reading the 2285th blog post. Unlike many blogs, which draw upon reprinted content from a newspaper or a magazine and/ or summaries, links, or photos, the mainstay of this blog is its fresh material focused on the life and career of Mae West, herself an American original.
• • Come up and see Mae every day online: http://MaeWest.blogspot.com/
________
Source:http://maewest.blogspot.com/atom.xml