According to Current [21 November 2005 issue], another producer gave up plans for longer Mae West segments in a documentary film, which would have required buying footage. . . . WGBH notably relied on fair use in the 1999 series Culture Shock, including montages of short clips that qualified as commentary, says attorney Jay Fialkov. This fit into the concept of fair use because the series itself commented on trends in the popular arts. Even so, when producers found that extensive footage of Mae West was not available on acceptable terms, they switched the focus of an episode so they could use more material on screen. 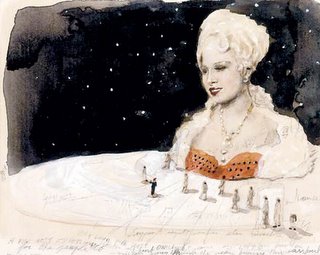 ----Current_Magazine_excerpt----
Doc-makers get specific about copyright fair use
Originally published in Current, Nov. 21, 2005
By Steve Behrens

Friday afternoon, things changed for producers who need to use somebody else’s footage and music in their documentaries. Clearing rights may still cost a lot and take too much time, as in the past, but Patricia Aufderheide and Peter Jaszi believe producers now have a solid rationale for not paying excessive and confounding fees for copyrighted materials in certain cases. On Nov. 18 [2005], the Association of Independent Video and Filmmakers, the Independent Documentary Association, public TV’s Independent Television Service and the series P.O.V., and other media groups endorsed a Statement of Best Practices defining four kinds of situations when a producer, under the “fair use” provisions of copyright law, need not pay for a film clip, a shot of a painting or a snatch of music. . . .
Jay Fialkov [is] deputy general counsel at WGBH in Boston . . .
Read it online: http://www.current.org/
- - excerpt from article published in Current, Nov. 21, 2005 - -
Source:http://maewest.blogspot.com/atom.xml
Mae West
Photo: Mae West as an interactive game
Mae West. 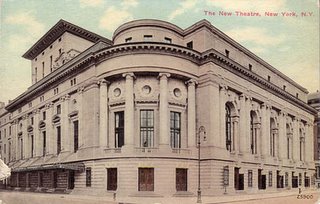 With The Mimic World of 1921, the Shuberts had hoped for a big hit; this revue also inaugurated their new roof theatre that featured a restaurant and promenade overlooking Central Park. However, the show opened to mixed reviews from a number of top critics. Mae West wore a daring black velvet dress onstage, "cut at either side to display her bare hips," wrote Women's Wear [24 August 1921] in shock. Jack Dempsey must have liked what he saw because he went to Mae's dressing room on opening night - - and they hit it off big-time.
Note that 28-year-old Mae is still a brunette in 1921.
Source:http://maewest.blogspot.com/atom.xml
Mae West
Photo: a new roof theatre, the Century [21-29 Central Park West, demolished in 1930].
Mae West.

An ex-vaudevillian described Hammerstein's Victoria, where MAE WEST was booked eleven times, as "a big, tinkling pearl box — — all in white and gold with the opals of electricity studding it in profusion."
• • In 1899 this Victorian-style show palace was built by J. B. McElfatrick & Son for Oscar Hammerstein I. Its "Venetian Terrace Roof Garden" (originally a café and petting zoo) was converted to a theatre in 1901. "The Corner" was the TOP place to be billed. 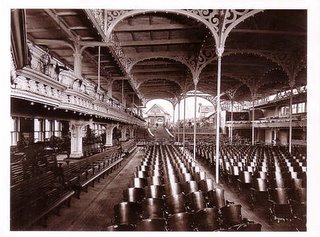 • • In 1912, Mae West got her first major vaudeville break: a spot on the bill at Hammerstein's Victoria. Though Billboard gave her performance mixed reviews [12 May 1912], for Mae Thanksgiving arrived early. At last she was in a league with top-ranked headliners such as Eva Tanguay, Sophie Tucker, Fanny Brice, and Nora Bayes.
Source:http://maewest.blogspot.com/atom.xml
Mae West
Photo: the Roof at Hammerstein's Victoria [1473-1481 Broadway / 201-205 West 42nd Street] closed in 1915 and was demolished shortly after.
Mae West. 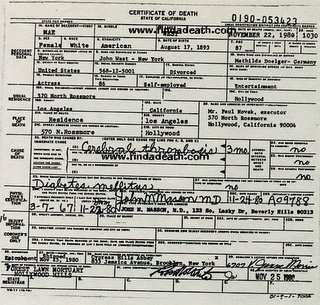 Source:http://maewest.blogspot.com/atom.xml
Mae West
Posted by Mae West NYC at 3:43 AM No comments:

THE RISE & FALL OF THE ORIGINAL SWING STREET
How Prohibition helped Harlem get jazzed.
By David Freeland 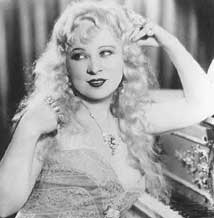 • • Nights and early mornings were filled with the impatient honking of humpbacked taxis jockeying for position within the clamor of the street's western section, close to 7th Ave. Faces of many hues would emerge to slip under awnings imprinted with names like Covan's and Pod's. Society figures and celebrities — Tallulah Bankhead, Langston Hughes, Mae West — crept into the street's basement-level speakeasies, drawn by the bawdy blues belting of the stout, unapologetically lesbian Gladys Bentley, or ribald vocalist Mary Dixon urging her lover to "Take your time with what you do/Make me cry for more of you." Others were content to sit quietly and marvel at the rolling stride piano playing of Willie "The Lion" Smith, who could make a single, beat-up tuneless upright sound like an orchestra.
• • The liquor and (in some places) marijuana was plentiful. And in those days of Prohibition, patrons could get giddy on Harlem's famous "top and bottom" cocktail (gin plus wine), secure in knowing the police rarely came around — except for a drink, of course. Downtown whites called the block "Jungle Alley," but few Harlemites during this age of the Renaissance stooped to that kind of language. To them, 133rd St. was simply a place where they could relax, socialize and escape the segregation of white-oriented clubs like Connie's Inn and the Cotton Club that grew like kudzu in other parts of Harlem.
• • "133rd Street was the real swing street," claimed Billie Holiday, "like 52nd St. later tried to be." Holiday was referring to the midtown block that became a tourist haven, the Disneyland of jazz; but for the scores of musicians who played there, 133rd St. would always be the genuine article, even after it seemed everyone else had forgotten it. . . .
- excerpt from NY Press article * www.nypress.com -
by David Freeland: The Rise & Fall of the Original Swing Street
Mae West died on 22 November 1980.
Source:http://maewest.blogspot.com/atom.xml
Mae West
Posted by Mae West NYC at 7:12 AM No comments:

NEW YORK (AP) - Socialites and other Mississippians were likely struck by a feature story that appeared in the Jackson Daily News in 1930. Flowers Talk in Languages of All Races, written by a young Jacksonite named Eudora Welty, presents a veritable bouquet of floral etiquette and more than a whiff of sarcasm.
• • "A Carolina rose means 'Love Is Dangerous,'" the writer advises, "while a Christmas rose means 'Tranquilize Thy Anxiety' and a Damask rose means 'Brilliant Complexion.' A single rose says 'Simplicity.'
"And a Maiden Blush rose means 'If you love me, you will find it out.'"
• • Welty had always been known for her sense of humour.
• • A new book, Early Escapades, is a compilation of articles, poems, vignettes and cartoons from the author who later became famous for such fiction as Powerhouse, Why I Live at the P.O., and Delta Wedding. It was released by the University Press of Mississippi and edited by Patti Carr Black, who befriended Welty in the 1950s and remained close until the author's death in 2001.
• • "An evening with her was like being at vaudeville. She was great at one-liners and quick responses. She had such clarity and wit you were always taken aback," says Black, who has worked on several books about Mississippi history and literature.
• • For Early Escapades, Black gathered material that had never been assembled in book form, including family documents, college and highschool writings and newspaper clippings. She says the book is meant to display the roots of what readers came to know well later on: "her comic energy, her creative mind and her sense of the ironic and absurd."
• • A writer's juvenilia can look as embarrassing as a yearbook picture, but youthful spark and irreverence sustain Early Escapades. Even the cover photo makes it on sheer nerve: a young Welty camps it up for the camera, a tattered hairpiece pulled around her head, a fat moustache affixed to her mouth.
• • Born in Jackson, Miss., in 1909, Welty profited early on from her writing gifts; she was 12 when she received $25 for winning the Jackie Mackie Jingles Contest, sponsored by the Mackie Pine Oil Company of Covington, LA. At 14, she published verse in St. Nicholas, a children's magazine that has also featured early work by Rachel Carson, Ring Lardner, and other famous writers. She was a compulsive reader and learner -- and compulsively funny about it. ...
• • Her illustrations are equally distinctive.
• • A sketch of Hitler leaves his face blank except for the famous toothbrush moustache.
• • William Faulkner, her fellow Mississipian, looks wild-haired and black-eyed, as if he had just been electrocuted.
• • Mae West is drawn in a swirl of hair, cleavage, and false eyelashes. ...
- excerpt from Associated Press book review -
Mae West died on 22 November 1980.
Source:http://maewest.blogspot.com/atom.xml
Mae West
Posted by Mae West NYC at 8:04 PM No comments: 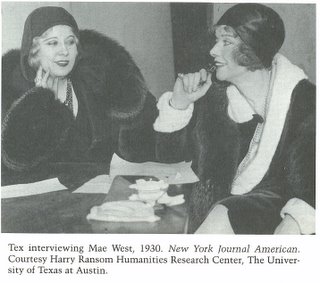 In 1930 Texas Guinan was asked by the New York Journal [a daily newspaper] to do some freelance reporting. Her first assignment: cover the Mae West trial at Jefferson Market Court House on Sixth Avenue.
Actress Mae West had been charged with writing many of the skits in the homosexual-themed play "Pleasure Man" that New York's police and prosecutors declared were too shocking for the stage.

PHOTO: April 1930 Mae West with Texas Guinan - - doing an interview for the newspapers during a recess at the "Pleasure Man" trial, Jefferson Market Court
Posted by Mae West NYC at 3:05 AM No comments:

Filmed in black and white, the outfits worn by Mae West onscreen always looked expensive -- but how many knew what COLOR they were?

As costume designer at Paramount Pictures, Edith Head took on a side chore: the custodian of a score of costumes that had been sentimentally preserved because they contributed to movie history. In November 1960, an article in The New York Times discussed the final appearance of these glamourous gowns. "I'm only managing to hold them together with emergency sewing now. This will be about their last time out," said Edith Head [October 28, 1897 – October 24, 1981].

The collection, referred to as a "million dollar" affair, included Mae West's emerald green, jewel-encrusted come-up-and-see-me-sometime gown from "She Done Him Wrong," Texas Guinan and Clara Bow outfits, and Ginger Rogers's mink dress from "Lady in the Dark." . . . [excerpt, N.Y. Times 29 November 1960]
Co-starring Cary Grant as a Salvation Army Officer, "She Done Him Wrong" was the only Mae West film that was considered for an Academy Award. Nominated for "Best Picture," it lost out to the winner: "Cavalcade."
http://maewest.blogspot.com/atom.xml
Mae West
Posted by Mae West NYC at 5:20 AM No comments: 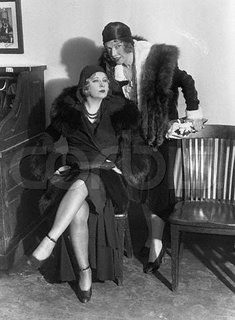 * * * Both rated a star on the Hollywood Walk of Fame. [Mae's star is at 1560 Vine Street.]
* * * Eventually, both died in the West during November.
* * * While on the road, Texas Guinan contracted amoebic dysentery in Vancouver, British Columbia and died there on November 5, 1933 at age 49, exactly one month before Prohibition was repealed. She is interred in the Calvary Cemetery, Queens, New York.
* * * Mae West was 87 years old when she suffered a stroke. She died in Los Angeles, California on November 22, 1980. She is entombed in the Cypress Hills Cemetery [833 Jamaica Avenue], Brooklyn, New York.