In August 1935, MAE WEST helped further the career of a handsome actor known more for his partying than the parts he played. Let’s learn about Mike Whalen.
• • Joseph Kenneth Shovlin [30 June 1902 — 14 April 1974], known as Michael Whalen, was an American actor who starred in B Movies and on TV, including “Son of a Badman” and “Wee Willie Winkie.”
• • Bon vivant Michael Whalen decided, definitely, to come to Hollywood when he woke up one "morning after."
• • When he returned from Canada, he worked in "Common Flesh," a play by Jim Timony, Mae West's manager.
• • Mae West came to the dress rehearsal and her verdict was, "Kill it — it's lousy. But sign that man, Mike Whalen!"
• • However, Mr. Timony wanted the pleasure of seeing his drama in action. And who should turn up at the opening but a Darryl Zanuck scout! The next night. Zanuck went down to watch him act. The direct consequence was a long-term contract, with Mike debuting in a lead.
• • "I never expected to make another picture," Mike vows.
• • Source: Modern Screen, page 20; published in the issue dated for October 1937.
• • “Common Flesh” • •
• • Who's Who in the Cast of “Common Flesh” — — Now showing at Hollytown Theatre, August 1935 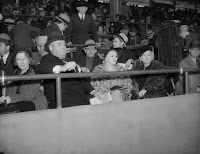 • • James A. Timony, Managing Director of Hollytown Theatre, is and has been attorney for producers, players and theatrical organizations in New York. Although he has made Hollywood his home, he still maintains his New York offices. His clients include most of the major stage producers of the eastern metropolis. He is attorney for the Screen Club, New York, the White Rats, an organization of 11,000 vaudeville players.
• • Boris Petroff, Stage Director, has been in the theater business all his life coming from a theatrical family.
• • Michael Whalen started out for a career in music and was enticed to the stage in straight dramatic work by the Eva Le Gallienne Civic Repertory where he played a season. Has since played leads in stock companies throughout the USA and Canada and played numerous radio dramas. Recently seen locally in “Kitty Dooley of Times Square” at the Hollywood Playhouse.
• • Source: The Hollywood LOW-DOWN; published in the issue dated for August 1935.
• • On Sunday, 30 August 1970 in The L.A. Times • •
• • Joyce Haber referred to Mae West as "the Last of the Living Legends" in The Los Angeles Times Calendar on Sunday, 30 August 1970.
• • Overheard in Hollywood • •
• • Mae West is the world's only female "Roaring Lion." The Roaring Lions are a club made up of the football players of Loyola University, and the boys recently made Mae an honorary member. Being an advocate of the water wagon, Mae presented the team with a hand-carved one for next year's games.
• • In Her Own Words • •
• • Mae West said: "Girls can't afford to be high-hat and smug in these days, especially about jobs.  Good sportsmanship is the thing that counts.”
• • Mae West said: "It's so silly for a girl always to be suspicious of men. Entirely too many girls are brought up that way, mistaking even kindly ones for villains twirling their mustaches.”
• • Quote, Unquote • •
• • Modern Screen mentioned Mae West.
• • Nicodemus, whose real name happens to be plain Horace Stewart, was Mae West's own idea of a colored comedian. She spotted Nic while he was playing in Cab Calloway's orchestra and offered him a role in her next picture.
• • Nic broke out with a new car the hour following his signature on the dotted line. . . .
• • Source: Modern Screen,149 Madison Avenue, New York, NY; published in the issue dated for February 1937
• • The evolution of 2 Mae West plays that keep her memory alive • •
• • A discussion with Mae West playwright LindaAnn LoSchiavo — —
• • http://lideamagazine.com/renaissance-woman-new-york-city-interview-lindaann-loschiavo/

• • The Mae West Blog celebrates its 15th anniversary • •
• • Thank you for reading, sending questions, and posting comments during these past fifteen years. Not long ago, we entertained 3,497 visitors. And we reached a milestone recently when we completed 4,200 blog posts. Wow!
• • By the Numbers • •
• • The Mae West Blog was started fifteen years ago in July 2004. You are reading the 4291st blog post. Unlike many blogs, which draw upon reprinted content from a newspaper or a magazine and/ or summaries, links, or photos, the mainstay of this blog is its fresh material focused on the life and career of Mae West, herself an American original.

MAE WEST was often in fan magazines, whose editors gave their own spin to even commonplace news.
• • Modern Screen wrote: We've finally run down those rumors about Mae West. There is a new Mae. Proof that satisfied us was that she no longer will ask the lads to come up and see her sometime. For she's given up that sixth-story apartment in Hollywood, and moved into a Beverly Hills bungalow.
• • Modern Screen wrote: And instead of lolling on white bear rugs in her leisure moments, Mae now devotes herself to raising vegetables in the back yard. It's all sort of beautiful.
• • Source: Modern Screen; published in the issue dated for July 1937
• • On Wednesday, 29 August 1979 • • 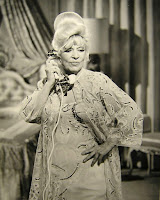 • • An item about Mae West's radio spot for Poland Spring appeared. Kevin Thomas wrote the article "Mae West — Testing Commercial Waters" for The Los Angeles Times; the paper ran it on Wednesday, 29 August 1979.
• • Mae West didn't need the money and rarely did things of this nature.  But with Poland Spring, she was merely endorsing a product she had personally used for years.
• • Overheard in Hollywood • •
• • In 1929, when profits were beginning to dip, Carl Laemmle tried, without success, to bring Mae West and her controversial show to Hollywood via Universal Studios.
• • Two years later, with the studio on the brink of bankruptcy, Paramount risked everything by taking on the woman and her reputation, along with the property that had enjoyed such success on Broadway. As always it was money, not morals, that ruled Hollywood.
• • In Her Own Words • •
• • Mae West said: “Always give the man the benefit of the doubt. Fraternize, don't glamorize. If he can take it, let him have it, and pick up the check yourself once in awhile."
• • Mae West said: "She's the kind of girl who climbed the ladder of success wrong by wrong."
• • Quote, Unquote • •
• • An academic paper mentioned Mae West.
• • Kinne Chapin wrote: Screen siren Marlene Dietrich famously accused Mae West of being responsible for the wellspring of morality that came with the PCA in 1934.
• • Kinne Chapin wrote: Marlene Dietrich said of Mae West, “I like Mae, but it is all her fault that we have the Hays Office and this childish censorship. So American — to see sex everywhere and then try to hide it.”
• • Kinne Chapin wrote: Hollywood and the public felt that Mae West’s films were dangerous and being handled with care, even if the PCA treated them with standard procedure.
• • Source: “Good Taste and Decency” — — Female Sexuality in the Production Code Era, 1930-­‐1955 by Kinne Chapin, Honors Thesis Seminar; published in 2012
• • The evolution of 2 Mae West plays that keep her memory alive • •
• • A discussion with Mae West playwright LindaAnn LoSchiavo — —
• • http://lideamagazine.com/renaissance-woman-new-york-city-interview-lindaann-loschiavo/

• • The Mae West Blog celebrates its 15th anniversary • •
• • Thank you for reading, sending questions, and posting comments during these past fifteen years. Not long ago, we entertained 3,497 visitors. And we reached a milestone recently when we completed 4,200 blog posts. Wow!
• • By the Numbers • •
• • The Mae West Blog was started fifteen years ago in July 2004. You are reading the 4290th blog post. Unlike many blogs, which draw upon reprinted content from a newspaper or a magazine and/ or summaries, links, or photos, the mainstay of this blog is its fresh material focused on the life and career of Mae West, herself an American original.