In prison Chick Clark complains to a fellow inmate about "givin' most of those sparklers to [Diamond] Lil" - - and now he's paying for it with hard time. 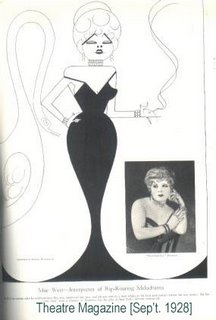 • • In the midst of fiction she was writing for the stage [such as "Diamond Lil"] and screen [for instance, "She Done Him Wrong"], Mae West always injected a little truth. And it's quite true that she loved diamonds. Call her a two-bracelet babe. Even drawings of her would zing with bling.
• • "Vegetables don't interest me," Mae once joked during an interview. "The only karats I pay attention to are the ones in a diamond."
________________________________
Source:http://maewest.blogspot.com/atom.xml

Mae West had heard all the stories about the infamous Bowery "resort" near Houston Street, namely McGurk's Suicide Hall [295 Bowery]. The second chapter of "Diamond Lil" (a 256-page novelization of the play published by Macaulay in 1932) is SUICIDE HALL. Lil's adventures take her further downtown to the hidden dens of Chinatown; the tenth chapter is A NIGHT ON DIVISION STREET.
• • Say "cheese"! Ready for the wrecking ball at 295 Bowery. Before demolition, part of the exterior was photographed. 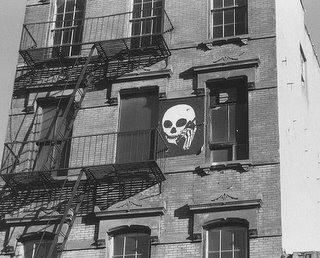 ___________________________________
• • Mae West was not the only writer to revisit the Bowery. In May 1904, married actors Mr. and Mrs. Terry McGovern starred in Theodore Kremer's stirring melodrama "The Bowery After Dark" at the People's Theatre. Kremer set his scenes in Suicide Hall, Chatham Square, Chinatown, etc.
• • During the 1890s The New York World commissioned artist Julius C. Fireman to illustrate the interior of Suicide Hall.
• • Unfortunately, a sketch was sketchy. You really had to BE there - - on site - - to understand how well the place functioned. Rich in real estate, John McGurk owned a 4-story establishment that he joined to a charming one-story annex. Each building fronted on the Bowery (numbered 251-253 Bowery during the 1890s) and could be exited by way of several secret passageways, so that the customer could escape an enemy easily and wind up on First Street, Second Avenue, Houston, or even in a private courtyard.
• • Owen Kildare lived in the Bowery and wrote about it. Stephen Crane set "Maggie, Girl of the Streets" [1893] near Suicide Hall. From 1880 - 1920, it's been said that no street ever made such an impression on writers as the Bowery did. The New York Times called it "the liveliest mile on the face of the earth during 1880-1895." The more the literary types set fiction there, the trendier it became to rediscover low life. 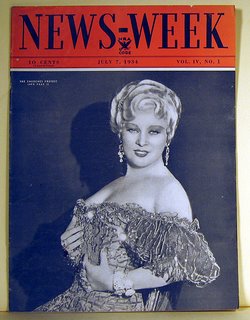 • • Mae West and the self-confessed saloon scholars understood that the Bowery boy and his female counterpart, the "Tough Girl," had to be made amusing before they would be accepted as entertainment.
• • By the time Diamond Lil sashays inside Suicide Hall, bejeweled and gowned, the sinister setting had been properly de-fanged. Public acclaim kept Mae busy, touring with the play, and then filming it as a Hollywood movie with her leading man Cary Grant.
• • According to an article [13 May 1999] in The New York Times, the building had been a hotel during the Civil War, catering to returning soldiers. By the 1890s it was a brothel and a dive where . . . a half-dozen destitute courtesans drank carbolic acid and died. John H. McGurk, the owner of the saloon on the ground floor, then capitalized on the notoriety of the place by renaming it McGurk’s Suicide hall.
• • Later, beginning in World War I and continuing into the 1950s and early 1960s, it was a flophouse for Skid Row veterans. In the mid-80’s it was converted into artists’ studios.
• • The N.Y. Times concluded: "Despite this colorful past, the city’s Landmarks Preservation Commission denied landmark status to the building, finding that it did not have sufficient historical, cultural, or architectural merit."
________________________________
Source:http://maewest.blogspot.com/atom.xml 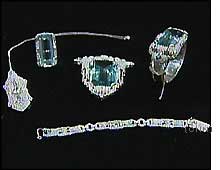 On Sunday March 5th, 2006 - - as the world waits to see which stars will take the golden statuette home - - here's an Oscar moment from the past. 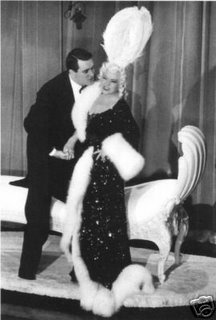 • • Never nominated for an Oscar nor any other entertainment award, Mae West was invited in 1958 to open the ceremony with Rock Hudson.
• • It's an Academy tradition to begin each telecast with a musical medley. The 1958 medley climaxed with 33-year-old Rock Hudson and 64-year-old Mae West singing "Baby, It's Cold Outside." As they concluded the number, Rock offered Mae a cigarette, noting that it was "king-sized" - - and Mae replied, "Mmmm, it's not the men in your life, it's the life in your men!"
• • They ended with a long, slow, passionate kiss.
• • The Mae West - Rock Hudson number lived on. Years ago, bootleg recordings of it were circulated.
________________________________
Source:http://maewest.blogspot.com/atom.xml

Take Mae West Home with You

Here's an opportunity to bring movie star Mae West to your home.
• • Ableauctions.com (AMEX: AAC), through their subsidiary iCollector.com, will host the Movieland Wax Museum auction for Asset Reliance, Inc. on 11 March 2006 in Buena Park, California. 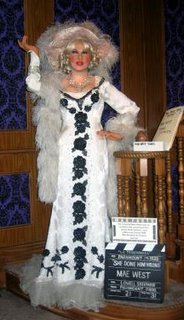 Former felon Dewitt Gilmore, 41, served time in the Groveland Correctional Facility [Sonyea, NY] as well as in a federal prison in New Jersey for check-cashing fraud. Using his "street cred" to break into publishing, Gilmore penned several novels about life behind bars and recently inked a four-book-deal with St. Martin's Press for a sum "in the low six figures," he said. Large publishing house are rubbing their hands together anticipating the profits from a "surging interest in street lit" in February 2006.
• • Once again it must be said: Mae West was ahead of her time. 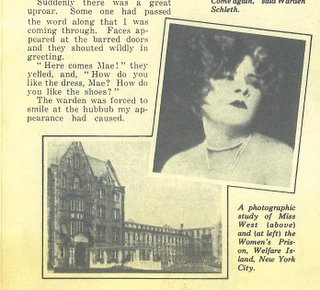 In 1927 she spent the night of February 9th incarcerated in Jefferson Market Prison, held in a cell with prostitutes, addicts, and pickpockets. After a trial at Jefferson Market Court, she was found guilty and sentenced to the Women's Workhouse for ten days in April 1927. [The Warden shaved off two days for good behavior.]
• • Mae was paid $1,000 to write about her experiences for a women's magazine. Some of her essay appears here. [Mae donated the $1,000 to the workhouse to establish a library for female inmates.]
• • Released from the lock-up, Mae told reporters she had enough material for several plays. In April 1928, the actress opened on Broadway at the Royale Theatre playing a "kept woman" with an unsavoury past and a jailbird lover named Chick. Set in a saloon on the Bowery, her play "Diamond Lil" became a novel and a Hollywood film [retitled "She Done Him Wrong"]. Mae West, a star with "street cred"!
________________________________
Source:http://maewest.blogspot.com/atom.xml

In March 1921, Mae West mailed to the Library of Congress her playscript: "The Ruby Ring." At 20 pages, this manuscript was more of an extended "sketch" than a play. Gloria, the female lead, is a mantrap who is able to pick the gents off with ease. Her parents were living in Woodhaven in 1921 [705 Boyd Avenue] and Mae used this address when she registered the copyright. 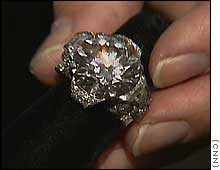 Posted by Mae West NYC at 3:29 AM No comments:
Labels: actress, Mae West, The Ruby Ring

Journalist and dramatist Ward Morehouse used to write a newspaper column "Broadway After Dark" that sometimes mentioned a rowdy comedienne MAE WEST. Truthfully, he didn't appreciate the actress very much.
• • So it's quite a thrill to report that the critic's son, Ward Morehouse III, came up to see the party celebrating the Mae West episode on "Dead Famous" [broadcast on January 31st and February 4th on A&E] and this is what he wrote in his column "Broadway After Dark" [The Epoch Times, 6 February 2006, p. 8]:
• • • • Pop singer EJ vamped it up with a rendition of "Frankie and Johnny" and a couple of Cole Porter favorites the next evening at BILL'S GAY NINETIES, a former Manhattan speakeasy on East 54th Street, where

dramatist LindaAnn Loschiavo, whose play on the legendary American film star Mae West is being produced later this year, threw a party

On 31 January 2006 one giftbag was photographed. 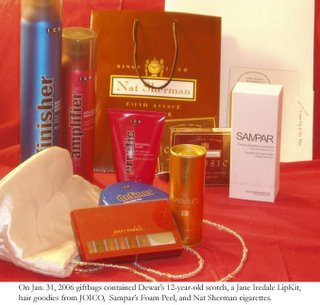 Spend Saturday 4 February 2006 with Mae on cable TV.
• • Millinery and mustaches give that "Diamond Lil" look at Bill's Gay Nineties, where la bella gente have a passion for fashion. 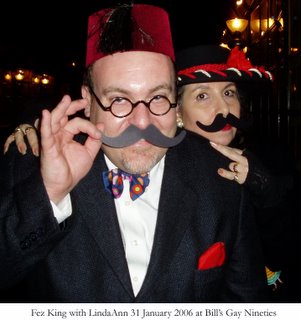 Come up and see Mae 4 February 2006 on A&E's Biography Channel.
• • A press party at Bill's Gay Nineties on 31 January celebrated the MAE WEST episode on "DEAD FAMOUS" with some live wires. 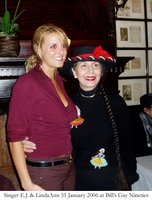 • • Electrifying E.J. vamped it up with a rendition of "Frankie and Johnny" [brought to Broadway in 1928 by Mae West in "Diamond Lil"] and a couple of Cole Porter favorites.
• • Mustaches printed in 1940 by vaudevillian Bill Hardy [original owner of the world-famous nightspot at 57 East 54th Street that opened in 1930] made for mischievous photo opps. 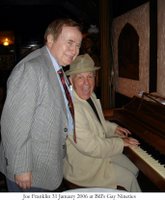