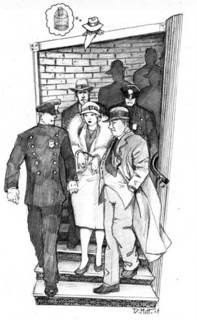 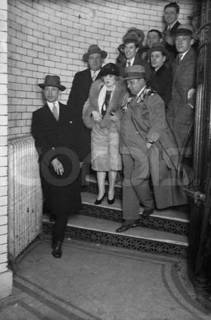 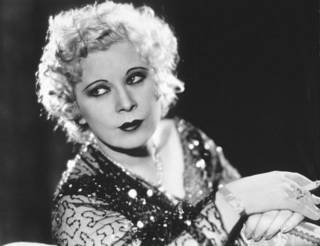 Mae West once again will be ready for her close-up -- and fans can visit her for free during a month-long-period that begins on Monday January 3, 2005.

When: during the building's regularly scheduled hours January 3rd-30th, 2005.

What: an illustrated version of the play "Courting Mae West" written by dramatist LindaAnn Loschiavo and depicted in 16 colorful panels by artist Michael Di Motta. This play is based on TRUE EVENTS that took place in Manhattan during 1926-1929 when actress-playwright Mae West suffered a social injustice and endured a lengthy court trial, a jail term, and enormous fines as well as legal fees. Discovering New York City history during the Roaring 20s has never been so entertaining. No "reality TV" show can compare to these episodes in Mae West's life, long-forgotten and about to be placed on view. DiMotta's sketches are based on archival photos.

Why: to commemorate the February 9, 1927 arrest and incarceration of Mae West that took place in this very location when the building was a courthouse and jail and also to announce a staged reading of the play "Courting Mae West" at 8 PM on February 9, 2005 at C.U.N.Y. Graduate Center [365 Fifth Avenue, NYC 10016].

Admission: free and open to the public.

In honor of the architect Yoshio Taniguchi's new design, and in honor of the re-opening of the modernized Museum of Modern Art this week [in Manhattan], here's a thought: What would Mae West look like if painted in "modern art" style?
.
The museum's film library contains the classic 1933 Mae West movie "She Done Him Wrong" - - based on Mae's Broadway play "Diamond Lil" - - even though Mrs. John D. Rockefeller Jr. expressed dismay when curator Iris Barry programmed it for a film audience at the Museum of Modern Art on West 53rd Street.

Mrs. John D. Rockefeller Jr. expressed dismay when Iris Barry programmed the 1933 Mae West vehicle "She Done Him Wrong" for a film audience at the Museum of Modern Art on West 53rd Street. . . .

All eyes will be fixed on Yoshio Taniguchi's design when the Museum of Modern Art reopens today [in Manhattan], but film lovers should be forgiven if their sights narrow on the escalators leading down to the movie theaters. After two years . . . , the film department returns home this week with three series. . . .

This program is merely an appetizer, however. Starting tomorrow, the film department gets down to serious cinematic business with the first of two massive series, "Premieres" and "112 Years of Cinema." The second, which opens Wednesday, provides an overview of the seventh art from its late 19th-century beginnings to the present. In sheer scope - the museum will screen a film from every year in movie history - the "112 Years of Cinema" program will afford an overview of the medium, however implicit. . . .

. . . . Founded in 1935, the [film] department, the first in the country, aimed to "trace, catalog, assemble, preserve, exhibit and circulate to museums and colleagues single films or programs of all types of films." The initial film curator, Iris Barry, sought out quality movies along with disintegrating prints; she was, for instance, a champion of D. W. Griffith when the great director was in the lonely twilight of his career. . . .

. . . More than anything it was the democratization of taste intrinsic to the movies that made even the idea of a museum film department so heretical. In her history of the department, the chief curator Mary Lea Bandy recounts how Mrs. John D. Rockefeller Jr. expressed dismay when Iris Barry programmed the 1933 Mae West vehicle "She Done Him Wrong." What Mrs. Rockefeller didn't know was that movies were changing her world and her museum.

In a talk he gave at the Modern around the same time and which was published in 1934, the art critic Erwin Panofsky argued: "Whether we like it or not, it is the movies that mold, more than any other force, the opinions, the taste, the language, the dress, the behavior and even the physical appearance of a public comprising more than 60 percent of the population of the earth."

The movies, Panofsky wrote, had "re-established that dynamic contact between art production and art consumption" absent in the other arts. If all the poets put down their pens and all the artists laid down their easels, he coolly added, only a small fraction of the general public would notice and even fewer would care. Decades later, the bitter truth of these words seems to have been borne out. The movies did more than revitalize the relationship between art producers and art consumers; they radically changed the other arts, which have increasingly bent to the logic of entertainment. It's a logic to which museums ceded long ago, evident in blockbuster shows and all those bells and whistles designed to keep the paying public from getting too bored by the art. . . .

Against the backdrop of the really big show that has become the Modern's reopening there is something almost a touch subversive about the film department . . .

CRITIC'S NOTEBOOK
Putting the Movies Back Into the Modern
By MANOHLA DARGIS
The New York Times - - Published: November 20, 2004

Mae West was born in Brooklyn, New York on a cool night during a hot month: August 17, 1893. After many adventures, Mae West closed her eyes in Hollywood, California on November 22, 1980.

.
As long as someone remembers and celebrates you, you are not dead.
.
MAE WEST is being commemorated in New York City during January and February 2005 at several events and also in the exciting new play "Courting Mae West."
For info: ComeUpSeeMae [at] aol.com

Mae West, at age 87, suffered a series of strokes which finally resulted in her death on November 22,1980 in Hollywood, California.
The actress passed away quietly in her Hollywood apartment (Ravenswood). Private services [conducted by Dr. Lloyd Ogilvie and attended by about 100 close friends and family] were held in the Old North Church at Forest Lawn, Hollywood Hills.
.
Her eulogy, written by Kevin Thomas and delivered by producer Ross Hunter, concluded: “Mae West always said that no one was ever to feel sorry for her, and she would not want anyone to start now. Mae West figured that in one way or another she would live forever. And she probably will.”

Entombment was in the West family mausoleum at Cypress Hills Abbey in Brooklyn, New York.

Cause of death: Complications from stroke

Watch Mae sashay.
Isn't she the cat's meow, though?

Memorable Quotations from Famous People Born Under the Sign of Leo
"He who hesitates is last." -- Mae West (born August 17th, 1893)

The Sun rules Leo, making these sun-stroked souls just a little bit extra special.
Most astrologers agree on this: you can always tell a Leo -- you just can't tell them too much.