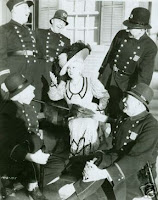 In 1911 MAE WEST had not been pleased with her anemic role as Maggie O'Hara, an Irish maid.  The show, written by William LeBaron, was called "A La Broadway" and staged at the Folies Bergere.  After delivering a sassy send-up of the servant in a broad Irish brogue, Mae won applause for the novelty she sung — — "They Are Irish."
• • True-hearted Mae-mavens know that, in her earliest years of being hired for revues, Mae was getting cast as an Irish serving girl. However, to pole vault herself over the wall of the comedienne's ghetto, Mae knew she had to write her own scripts.
• • Not every actress, however, could convince a Broadway producer or a Hollywood studio boss that she was not made to wear an apron forever.  Here's a closer look at Mary Gordon who played a cleaning lady in "She Done Him Wrong" [1933], a film starring Mae as Lady Lou.
• • Mary Gordon [16 May 1882 — 23 August 1963] • •
• • Born as Mary Gilmour in Glasgow, Scotland, she used her ability with dressmaking to attach herself to a theatre group.  Widowed in 1917 and in need of income, she hooked up with a stock company en route to a USA junket.  When she arrived in America, she played a few minor roles onstage.  By the mid-1920s, she had moved to Los Angeles with her mother and young daughter.
• • When her cinema career began in 1925, Mary Gordon was 43 years old.  Fortunately, she found work onscreen portraying mothers, aunts, midwives, nursemaids, char ladies, and scrubwomen. It's ironic that, despite her heavy Scottish burr, she was typecast as an Irish mother.  (Reportedly, this annoyed Irish film-goers.)
• • Maternal figures, meddling landladies, and mopping became her specialty, which helped her win the role of the kindly housekeeper Mrs. Hudson in the Sherlock Holmes series.  The short, plump character actress played the role in ten films (opposite Basil Rathbone) and numerous radio plays. Since several directors enjoyed working with her, between 1925 — 1950 she took part in close to 300 feature films and in TV's "The Cisco Kid" before retiring.
• • Mary Gordon, who took an active role in the Daughters of Scotia auxiliary of the Order of Scottish Clans, spent her retirement years in Pasadena, California and died there after a long illness on Friday, 23 August 1963.  She was 81.
• • Dennis O'Keefe [30 March 1908 — 31 August 1968] • •
• • Mae West made a splash in "Night after Night" [1932]. Bit parts player Dennis O'Keefe was seen briefly as Maudie Triplett storms through Joe Anton's speakeasy. He was cast as a drunk asleep at a table.
• • His birthname was Edward Vance Flanagan when he started out in life in Fort Madison, Iowa on 30 March 1908. He was born in the business, accompanying his vaudevillian parents, "Flanagan and Edwards, the Rollicking Twosome," in their act. While enrolled in college, Bud Flanagan tried his hand at writing screenplays. After he started to be hired as an extra, he signaled his Irish heritage in a new stage name, Dennis O'Keefe.
• • Between 1930 — 1966, he was seen in 259 projects on the silver screen and on TV. The tall, genial, outdoorsy character actor transitioned from walk-on bits to Hollywood B movies.
• • Until the mid-1960s, Dennis O'Keefe kept busy with guest-starring roles in Kraft Theatre, Studio One in Hollywood, Lux Video Theatre, Screen Directors Playhouse, all produced on the small screen. Lung cancer claimed him. He died in Santa Monica on Saturday, 31 August 1968. He was 60.
• • On Wednesday, 31 August 1938 • •
• • An article complimenting Mae West and applauding her newest motion picture "Every Day's a Holiday" was published in The Queenslander (Brisbane, Australia) on Wednesday, 31 August 1938.
• • On Sunday, 31 August 1969 • •
• •  "Sex is an emotion in motion," Mae West told The Los Angeles Times on Sunday, 31 August 1969. That's a pretty provocative way to end a hot month, eh?
• • In Her Own Words • •
• • Mae West said: "You've got to fight in this world! You've got to fight to get there — — and fight to stay there."
• • Quote, Unquote • •
• • A news item mentioned Mae West.
• • GMF blogger wrote: It was a Mae West moment (not something that happens a lot in German politics). I’m referring, of course, to the scene in the 1933 movie “I’m No Angel,” where the actress undulates lazily across a vaudeville stage before a mesmerized audience. Just as she slithers behind the curtain, she throws a single word over her shoulder: “Suckers!”
• • GMF blogger wrote: Sunday’s three regional elections in Germany provided “sucker” experiences all round. .  ...
• • Source: Article: "A Mae West Moment in Germany" written by GMF blogger; posted on 31 August 2009

• • By the Numbers • •
• • The Mae West Blog was started eight years ago in July 2004. You are reading the 2412th blog post. Unlike many blogs, which draw upon reprinted content from a newspaper or a magazine and/ or summaries, links, or photos, the mainstay of this blog is its fresh material focused on the life and career of Mae West, herself an American original.
• • Come up and see Mae every day online: http://MaeWest.blogspot.com/
________
Source:http://maewest.blogspot.com/atom.xml

Posted by Mae West NYC at 1:46 AM No comments:
Labels: 1933, actress, California, Hollywood, Mae West, She Done Him Wrong

On Monday, 30 August 1948 MAE WEST was in Los Angeles.  The newspapers described the star as trim, stylish, and "dolled up in black satin" when she took the stand in a crowded Los Angeles courtroom.
• • Take a moment to notice how the shape of the unusual hat Mae wore to the trial in 1948 imitated the headdress Mae wore onstage in August 1944 when she portrayed the iconic czarina on Broadway.
• • Catherine's Court — Plagiarism Suit in 1948 • •

• • Every lawsuit has a back-story.  Eagerly looking for material that would appeal to her, Mae told Paramount Pictures that she yearned to play Catherine the Great.  She was disappointed in "The Scarlet Empress," commenting that Marlene Dietrich looked like nothing more than a hollow-cheeked doll. The titans of Tinseltown never envisioned comedienne Mae West in an historical drama, especially not in an epic set in Russia.  Moreover, no one else seemed interested in the topic after director Josef von Sternberg helmed such an expensive flop. Mae West had to bide her time on her Catherine concept until she returned to the stage.

• • It was quite galling when she and Mike Todd were sued for plagiarism by the writers Edwin K. O'Brien of New York City and Michael Kane of Hollywood, who tried to finagle a $100,000 payday for themselves.
• • In fact Mae has been sued before over this play — — and in a similar suit she testified that she invented the story "out of my own head" and did not draw upon other writers or stories for material.
• • The trial lasted six weeks. After the jury deliberated four days, they acquitted Mae West and Mike Todd.  Did it end there?  No.
• • Retrial • •
• • If you were reading The Los Angeles Times on Saturday, 9 October 1948, then you would have seen this headline: "Writers Ask Retrial in $100,000 Suit Against Mae West."
• • As Mae would have said of these two characters, "The nerve of a brass monkey."
• • On Sunday, 30 August 1931 • •
• • When Mae West brought her play "The Constant Sinner" to Atlantic City for a try-out in August 1931, the crowds lined up for tickets.
• • Noted The New York Times: "With two rows of standees and chairs in the aisles for extra celebrants, last Monday night saw Mae West run through her latest daisy chain, 'The Constant Sinner,' at the Apollo Theatre in Atlantic City. . ."  Their man on the aisle described this play as "underworld material," leading us to assume this sheltered individual rarely ventured above the wilds of West 96th Street.
• • Source: The N.Y. Times on Sunday, 30 August 1931.
• • On Sunday, 30 August 1970 in The L.A. Times • •
• • Joyce Haber referred to Mae West as "the Last of the Living Legends" in The Los Angeles Times Calendar on Sunday, 30 August 1970.
• • Haiku featuring Mae West • •
• • On a quiet set, Mae West polishing her diamonds — (poem on an Asian web site).
• • In Her Own Words • •
• • Mae West said: "The quality of young skin is there, isn't it? Here look at my cleavage, see how tight the skin is?"
• • Mae West said: "I've taken good care of myself all my life."
• • Quote, Unquote • •
• • A newspaper item mentioned "Mr. Universal" and Mae West.
• • Joyce Haber wrote: Arthur, the West Coast replica of the Manhattan discotheque, opened on La Cienega Wednesday night. Everyone was there except Warren Beatty, because almost everyone is an investor.  ... And Mae West. Mae West in the flesh. Mae West with a long platinum mane, in a flip hairdo. Mae West in folds of white satin, crystal-beaded at the neckline. Mae West with Reg Lewis, who was Mr. Universal (sic) in an unidentified year.  ...
• • Source: Article: "Opening Night at Southland Arthur" written by Joyce Haber for The L.A. Times; published on Friday, 29 December 1967

• • By the Numbers • •
• • The Mae West Blog was started eight years ago in July 2004. You are reading the 2411th blog post. Unlike many blogs, which draw upon reprinted content from a newspaper or a magazine and/ or summaries, links, or photos, the mainstay of this blog is its fresh material focused on the life and career of Mae West, herself an American original.
• • Come up and see Mae every day online: http://MaeWest.blogspot.com/
________
Source:http://maewest.blogspot.com/atom.xml