Mary and Mary (-Jane) — — Quite Contrary 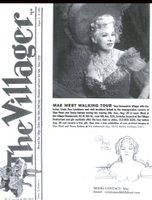 • • In 1907, a demure 23-year-old Sunday schoolteacher rented a $2/ week room [72 Wash. Sq So] and assumed a louder identity: TEXAS Guinan. The neighborhood suited her. Even while earning a Park Avenue income ($700,000 in 1927, i.e., $5.5 million today), Tex kept her West Eighth Street duplex.
• • After singing in several main-stem musicals, Tex starred in 30+ silent Westerns [1917-21] in Hollywood. In 1922, Tex returned to The Big Apple where nightlife had changed. Speaks — — all the rage — — had no entertainment, she noticed when visiting a Washington Square So. club run by her neighbor Barney Gallant (formerly Eugene O’Neill’s roommate). Gallant’s barstools were warmed by Walter Winchell, literati from The New Yorker, and big spenders.
• • Now 38 years old, Tex began to orchestrate whoopee for clubs — — herself on center stage. Soon she was in the money, in the paddy wagon, and in the headlines. News of her arrests and antics fanned her fame.
• • • • Village sites linked to Texas Guinan include her former homes, where her friends and showgirls lived, her church, her bank, and where the diamond-draped speakeasy queen garaged her 2 armored cars.
• • • •

• • Mary-Jane West [1893-1980] — stage name Mae West — reinvented herself in Greenwich Village as playwright Jane Mast. Billed as the “baby vamp” in Brooklyn in 1899, the singing comedienne did not enjoy a steady rise to stardom a la Texas Guinan. Instead she performed in vaudeville and on Broadway for 20+ years without making headway.
• • In 1920, Savoy and Brennan put the Greenwich Village Theatre on the map with The Greenwich Village Follies. July 1922, Mae rehearsed The Ginger Box Revue there. In Act 2, Mae sang “Eugene O’Neill, You’ve Put a Curse on Broadway” as she spoofed The Hairy Ape [debut: Provincetown Players March 9, 1922]. But The Ginger Box was a flop. After Mae turned 30, she had few bookings [1923-25]. Encouraged by her mother, the actress began writing (penname: Jane Mast).
• • Her play Sex premiered April 1926; though critics bashed her, the box office boomed for 11 months. Jim Timony urged her to launch another show. For inspiration, Mae visited Paul & Joe’s [62 W. 9th St.]; a restaurant by day, after dark it became a famous gay cabaret. Mae auditioned 50 gay men she met there for The Drag. To keep The Drag off Broadway, police arrested Mae and the cast of Sex February 9, 1927, and locked her up in Jefferson Market Jail, where she mined material for Diamond Lil. News of her unjust imprisonment and trials made Mae West a household name.
• • • • Village sites linked to Mae West include clubs, eateries, cells, etc.
Mae West and Texas Guinan BRUNCH and TOUR on Sunday August 20, 2006. Reserve at Village Restaurant [62 West 9th Street, NYC]: 212-505-3355.
________________________________
Source:http://maewest.blogspot.com/atom.xml 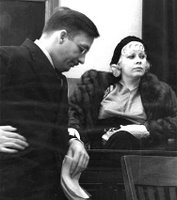 Nothing feeds our schadenfreude more than a good celebrity scandal. To watch the mighty, glamorous and rich stumble is a reality soap opera unparalleled by anything that the studios can dream up. Since Hollywood's birth, the peril of potential pitfalls has added an effervescent thrill to celebrity. After all, early Hollywood megastar Fatty Arbuckle was destroyed by the allegation that he raped a woman at a debauched party. And he was acquitted! Today, the public has shown increasing fickleness about what scandal might actually succeed in alienating its affections.
• • SHE'S NO ANGEL • •
Jailed in New York for her play "Sex" and up against censors again with the play "The Drag," Mae West defends herself in 1930 in one of many cases brought against her for obscenity.
Source: http://www.calendarlive.com/
• • Published: L.A. TIMES 21 May 2006
[Verdict in Mae's 1930 trial: NOT guilty. Mae West did not go to Hollywood until 3 years later. The Jefferson Market courtroom headlines made her famous - - not Paramount, thank you very much.]
________________________________
Source:http://maewest.blogspot.com/atom.xml

It was 80 years ago when Mary-Jane West [1893-1980] - stage name Mae West - reinvented herself in Greenwich Village as the playwright Jane Mast.
• • Billed as the "baby vamp" in Brooklyn when she launched her career at age 6 in 1899, the singing comedienne did not enjoy a steady ascent upwards a la Texas Guinan. Instead she performed on the vaudeville circuit, and in main-stem revues and musicals for twenty-seven years without making career headway. 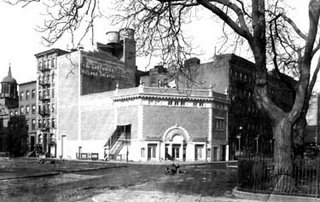 • • Shortly after Mae turned 30, she hit bottom: during 1923, 1924, and 1925 legit theatres were refusing to book her - and she had to resort to taking bit parts in burlesque under the name MAY West. Her mother encouraged her to produce her own material, so Mae began writing under the penname Jane Mast.
• • For inspiration, Mae West and Jim Timony visited Paul & Joe's [62 West 9th Street]; an Italian-French restaurant by day, after dark it became the most popular gay cabaret in Greenwich Village. Mae recruited 50 drag queens there, and invited them to audition for her next play: The Drag: A Homosexual Comedy in Three Acts. To scare Mae from bringing The Drag to Broadway, the police arrested her and the cast of Sex on February 9, 1927, and locked her up in Jefferson Market Jail.
• • • Greenwich Village addresses linked to Mae West • • •
* * * Jefferson Market Jail - Mae spent the night of Feb. 9, 1927 in a cell with no seating and wall-to-wall prostitutes, thieves, and drug addicts
* * * Jefferson Market Court - Mae was on trial here 1927-1930
* * * Paul & Joe's [62 West 9th Street] - Mae wrote The Drag based on the scene
* * * Greenwich Village Theatre [7th Avenue and Christopher St.] - Mae rehearsed The Ginger Box Revue there
* * * Cinderella Club [82 West 3rd Street] - Mae saw gay revues there and discovered performers whose careers she helped launch.
* * * McGurk's Suicide Hall [295 Bowery] - Mae set her play "Diamond Lil" here; listen to Mae sing "Frankie & Johnny," her hit song from this melodrama: http://www.electricearl.com/RA-MW-01.ram
• • • • • •
• • More Mae West - - and Texas Guinan - - locations will be covered on the tour Sunday August 20, 2006. Reserve at Village Restaurant.
• • WALKING TOUR is part of the ANNUAL MAE WEST GALA.
• • WHEN * WHERE * WHAT: Sunday August 20, 2006 at 12 noon, "Mae West and Texas Guinan in Greenwich Village during a Lawless Decade," a tour of the Washington Square area with an emphasis on locations linked to the transgressive careers of Mae West and Texas Guinan during the Roaring 20s. Meet at Village Restaurant, 62 West 9th Street [near Sixth Avenue], where a free exhibition of rare archival images of MAE WEST and TEXAS GUINAN can be viewed from August 17th until August 31st during restaurant hours.
• • Fee includes BRUNCH at Village + gin cocktails right after tour: $25.
• • Rain or shine.
• • Reservations: (212) 505-3355.
• • Subway: IND to West Fourth Street station; PATH Train to 9th Street
________________________________
Source:http://maewest.blogspot.com/atom.xml

Come up and see Mae - - in color and black and white.

• • In honor of MAE WEST’s birthday on August 17th, an historic installation of archival images will have its official PRESS OPENING at a gala cocktail party for the media on that Thursday evening.

• • "Onstage Outlaws" focuses on the careers of two transgressive actresses - - MAE WEST and her friend TEXAS GUINAN - - during Prohibition in New York City.