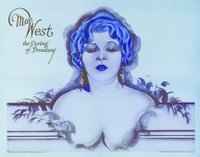 New York, NY — She got it from her granny. MAE WEST [1893-1980] insisted that her passion for fashion and finery was instilled by her maternal grandmother Christiana Brimier, a native of the Alsace province of France, who also influenced her own daughter Matilda West [1870-1930]. Matilda taught Mae to speak French, which came in handy onstage. In 1919, for instance, Variety praised the 26-year-old’s vaudeville routine that included a French dialect number. In the Broadway show “The Mimic World of 1921,” Mae was cast as La-Belle, a Parisian damsel who aroused many ooo-la-las at the Century Roof, and a Proust-worthy coquette named Madelon. In 1922, Mae introduced her new act at the Riverside Theatre, portraying a French prima donna of temperament.
• • New Yorkers can feast on these rare archival images at Village Restaurant [62 West Ninth Street, NYC] during a free exhibition in August. “Onstage Outlaws: Mae West and Texas Guinan in a Lawless Era” opens to the public after a Gala Roaring-20s theme Press Preview on Mae’s birthday August 17, 2006. There is NO charge to view this historic installation.
• • Chef Stephen Lyle, born in Paris and trained at L’ Ecole Hoteliere in Nice, is sure to give the Annual Mae West Gala a French twist. In 2000, when he opened Village (after his long success at hipster-haven Odeon), Lyle began restoring the dining room to its original 1917 elegance when it had been Paul and Joe’s French-Italian Restaurant. During the Jazz Age, Mae West dined here many times. And while there are no written records of what she ordered at Paul and Joe’s, her old friends do remember her fondness for good champagne.
• • “Mae loved a good glass of bubbly,” said Van Panopoulos, owner of the former speakeasy Frankie and Johnny’s, who used to rub shoulders with Mae at Billy Reed’s Little Club during the 1950s. “I can close my eyes and picture her, savoring her lasagna, her champagne bottle ready in an ice bucket,” recalled Aldo Leone, manager of Bill’s Gay Nineties, who waited on Mae whenever she dined at his grandmother’s midtown eatery, Mamma Leone.
• • To commemorate Mae’s French roots and fine taste, Perrier Jouët Grand Brut will be served at the Press Gala. Imported to the United States since 1837, this brand unites the lightness of traditional Brut with the elegance and brightness of the finest Champagnes. Mae might very well have enjoyed its bouquet during her Broadway years. And chef Stephen Lyle chose Perrier Jouët Grand Brut to be served at his own wedding reception.

______________"Newseum"_________________
• • In honor of Mae’s love of exquisite fabrics and stylish fellows, a French blue silk twill bowtie will be inside the giftbags given to the news reporters, VIPs, and celebrities on August 17, courtesy of Beau Ties Ltd. of Vermont. A special limited edition of their pattern NEWSEUM, with its witty landscape of vintage typewriters, microphones, and radios, will enlist the heart of anyone who longs to put the “ME” in media. These bowties, enthusiastic exhibitionism at their most engaging, will be featured in photographs taken at this event and posted on the website, thanks to Beau Ties Ltd. of Vermont. Visit them online: www.beautiesltd.com.
• • The "Newseum" tie is at http://www.beautiesltd.com/PRODUCT.ASPX?pn_deptid=2074
• • Many of Mae West’s secret loves will be revealed on Sunday August 20th during a walking tour followed by brunch at Village Restaurant. Fee [tour + brunch] will be $25. Brunch guests can enjoy the FREE exhibition with or without the tour. Information: 212-505-3355.
• • • • Media inquiries welcome. • • • •
• • Images: maewest.blogspot.com — texasguinan.blogspot.com
• • The Annual Mae West Gala always takes place in a venue that the actress had frequented.
• • • • COURTING MAE WEST, LLC, based in Manhattan, is an off-Broadway producing outfit whose mission is to increase opportunities for women and female-driven plays.
• • • • • • • • • • • • • • • •
• • Source: Village Restaurant [62 West Ninth Street, NYC] • •
________________________________
Source:http://maewest.blogspot.com/atom.xml

New York, NY — Songbird MARNIE BAUMER (nicknamed “The Blonde Baumer” by her fans) has a bookshelf rammed with awards. Her muscular soprano — rich, creamy, and totally secure in its high-wired technique — has been appreciated by the Broadway hit-machine Steven Schwartz along with theatre-goers and ticket-holders at Town Hall, Weill Recital Hall, Yale University, and London’s Covent Garden Theatre Museum.
• • Baumer has a trained stairmaster’s voice, equally capable of ascending into the celestial realms, resuscitating a Moliere classic, or retooling Betty Boop’s cheeky repertoire.
• • Though best known for her tribute to women in animated films, on August 17th Marnie Baumer seizes her place in the scarlet sisterhood when she performs a sultry MAE WEST MEDLEY during the actress’s annual birthday gala in a former speakeasy.
• • • • During the 1920s, MAE WEST [1893-1980] heard “Frankie and Johnny” performed at Diamond Tony’s, a saloon on the Coney Island boardwalk. The Civil War Era folksong [about a heartbreaker and the quick-trigger gal who marries his manhood to a bullet] became stardusted when Mae sang it onstage in her Broadway hit “Diamond Lil.” This plain jane in the public domain became her signature show-stopper.
• • • • “A Guy What Takes His Time” (written for Mae by Ralph Rainger) serenades the ideal lover who is not quick on the trigger, and perfect for “a demon for slow motion.”
• • • • “My Old Flame” (written for Mae by Arthur Johnston and Sam Coslow) revisits a fascinating fellow who could ferry a pillow-partner clear across the Milky Way.
• • Celebrating mayhem on the mattress, says Marnie Baumer, is the fun of reprising these old standards. “I can’t get them out of my head,” she admits. Pianist ELLIOT PAUL will accompany her on the keyboard. Listening will be Mae West die-hards such as STEVE ROSSI, who performed with the movie queen in Las Vegas nightclubs, and broadcast legend JOE FRANKLIN, who interviewed the icon for his WOR TV show.

• • Perrier-Jouet champagne, Hendrick’s gin, and a “Cos-MAE-Politan” made with Boru’s vodka will fuel the merrymaking along with chef Stephen Lyle's delicious specialties. The media and celebrity guests will raise their glasses at a Roaring 20s-theme gala during a sneak preview of "Onstage Outlaws: Mae West and Texas Guinan in a Lawless Decade." This exhibition of rare photographs, archival images, and theatre memorabilia will be open to the public August 18-31 at VILLAGE RESTAURANT [62 West 9th Street]. There is NO charge to view this installation.
• • Media inquiries welcome. Event Images: maewest.blogspot.com — texasguinan.blogspot.com
• • The Annual Mae West Gala always takes place during August in a New York City venue that the actress had frequented.
• • COURTING MAE WEST, LLC, based in Manhattan, is an off-Broadway producing outfit whose mission is to increase opportunities for women and female-driven plays.
• • • • • • • • • • • • • • • •
• • Source: Village Restaurant [62 West Ninth Street, NYC] • •
________________________________
Source:http://maewest.blogspot.com/atom.xml 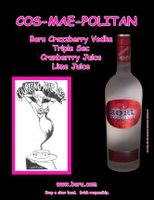 New York, NY — Celebrity chef Stephen Lyle passes Barbra Streisand en route to his kitchen at Village Restaurant, across the street from Jefferson Market Library [a former courthouse]. A photo of the songbird during her Broadway boom graces the entry to the dining salon because the teenager was discovered in this location (June 1960) — then known as The Lion. Joan Rivers launched her career at The Lion as well. History hits the spot on the menu. During the 1920s this storied location had housed Paul and Joe’s, a French-Italian restaurant that was frequented by Jack Dempsey, Mae West, and other jazz age notables. In fact, because Mae West watched famous drag queens perform here, she based her play "The Drag" on the colorful scene. "The Drag" led to Mae West being arrested and incarcerated at Jefferson Market Court and Jefferson Market Jail in 1927.
• • On Thursday August 17th, 2006 — Mae West's birthday — Lyle invites the news media to toast the blonde bombshell from Brooklyn with a new cocktail he created: the “Cos-MAE-politan.” Here’s his recipe:
1 ½ oz Boru Crazzberry Vodka
1 oz cranberry juice
½ oz Cointreau [or Triple Sec]
½ oz fresh lime juice
fresh raspberry garnish

• • The news media and a roomful of celebrity guests will raise their glasses at a Roaring 20s-theme gala that evening during a sneak preview of "Onstage Outlaws: Mae West and Texas Guinan in a Lawless Decade." This exhibition of rare photographs, theatre memorabilia, and colorful illustrations will be open to the public from August 18th - 31st at Village Restaurant [62 West 9th Street]. There is NO admission charge to view it.
• • Vintage views [1909 - 1930] of the two friends showcase the theatrical side of these two actresses who performed on the same stages. Though TEXAS GUINAN [1884-1933] is remembered as a speakeasy hostess, in fact, she starred in more than 30 films and had leading roles in Broadway musicals. And though MAE WEST [1893-1980] is an icon of the silver screen, she performed live in vaudeville and on Broadway.
• • On Sunday August 20th there will be a Mae West and Texas Guinan brunch at Village preceded by a guided tour. The fee [tour and brunch] is $25. Brunch guests can enjoy a FREE exhibition whether or not they take the tour. Info: 212-505-3355.
• • Media inquiries are welcome.
Images: * maewest.blogspot.com and * texasguinan.blogspot.com
• • COURTING MAE WEST, LLC, based in Manhattan, is an off-Broadway producing outfit whose mission is to increase visibility and opportunity for women and women-driven stories in the theatre.
• • Source: Village Restaurant [62 West Ninth Street, NYC] • •
________________________________
Source:http://maewest.blogspot.com/atom.xml