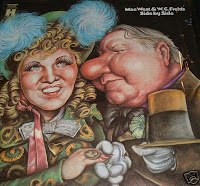 Here's an excerpt from a movie review published by The New York Times in March 1940 discussing MAE WEST's latest screen effort which had opened in Manhattan at the Roxy on Seventh Avenue.
• • W. C. Fields and Mae West Are Seen in 'My Little Chickadee' at the Roxy . . .
• • Noel Coward once had a line about two empty paper bags belaboring each other, but we never thought we should one day be scoundrel enough to remember it in connection with a picture harboring W. C. Fields and Mae West.
• • "My Little Chickadee," at the Roxy, in which the two comic soloists are trying to sing a duet, is an effort greatly strained. With the best will in the world, it just isn't funny --not even when the great William Claude ogles Miss West and roguishly invites her to come up and see him some time; not even when La West, commenting on her escape from the "Masked Bandit," explains "It was a tight spot, but I managed to wiggle out of it."
• • And those are the film's high-water marks.
• • The low water mark is more clearly defined, for the film is at low tide most of the time in the quality of its humor, in the broad treatment its players and directors have given it, in the caliber of the audience it seems intended to please and in the generally bad odor it exudes.
• • Miss West's humor, like Miss West herself, appears to be growing broader with the years and begins to turn upon the lady: it's one thing to burlesque sex and quite another to be burlesqued by it.
• • Mr. Fields, largely the innocent victim of some one else's bad taste, inevitably is tempted to juggle a few mud pies himself. It puts a heavy strain on an old admiration to endure the old boy's keyhole-peeping and door-champing at Flower Belle's boudoir, to see him become just another member of the adulant entourage Miss West thoughtfully creates for all her pictures.
• • The story this time is of Flower Belle Lee (guess who) and of Cuthbert J. Twillie, who are united in the bonds of matrimony-in-name-only because Flower Belle needs a consort for legal reasons and because Cuthbert has. . . well, never mind what . . . .
• • excerpt from:
• • Film Review
• • Written By FRANK S. NUGENT
• • published: 16 March 1940 in The New York Times
• • Come up and see Mae every day online: http://MaeWest.blogspot.com/
________
Source:http://maewest.blogspot.com/atom.xml