Why we come together on August 17th every year: 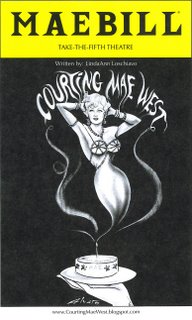 • • Welcome to the Roaring 20s when the speakeasy flourished, talking movies were trumping vaudeville, and Mae West was a convicted felon. Why was the Brooklyn bombshell sent to jail? Her sin: writing and producing two gay plays on Broadway — and casting homosexuals. During the Prohibition Era, Mae’s actions defied New York’s penal code and violated Actors’ Equity rules.
• • She broke the law — but the law couldn’t break her. The pre-trial publicity alone made her name notorious. Her Broadway play Diamond Lil won her critical acclaim and the audience’s adoration. During the Depression, when Hollywood needed a bolt from the blue to get them out of the red, Mae West boosted the bank account of Paramount Pictures. She Done Him Wrong grossed over $2 million at the box office.