“Sex” by MAE WEST was onstage at Hollywood’s Hudson Theatre until Sunday, 17 June 2018. Naturally, you wanted to learn what the West Coast critics thought. So here we go. This is Part 9.
• • Good when she’s bad: Bawdy bard Mae West’s ‘Sex’ appeals • •
• • Mae West transgressed sexual boundaries • •
• • Ed Rampell wrote:  And although Lt. Gregg was probably not written by Mae West as a Black character per se, the portrayal of one of Margy’s suitors by an African-American artist is arguably in keeping with Mae’s pushing-the-envelope sensibility.
• • Note: Irish-American actor Barry O'Neill played the Lieutenant Gregg role in the 1926 production.
• • Ed Rampell wrote: The maestro and mistress of the double entendre, Mae West’s biggest transgression was arguably that she was not only an openly sexual female, but a woman who derived pleasure from and enjoyed sex. As this naughty, bawdy bard and actress grew up in the Bushwick area of Brooklyn, NY as so many other actors did, there are many Brooklyn natives who still enjoy Mae West.
• • effectively ruined the movie career of Mae West • •  . . .
• • This was Part 9. To be continued tomorrow.
• • Source: Stage Review of “Sex” written by Ed Rampell for People’s World; published on Wednesday, 16 May 2018.
• • On Thursday, 18 June 1959 • •
• • "You'd have thought that a favorite bootlegger had come back from Atlanta," wrote drama critic Robert Garland in the New York Evening Telegram in his review of "Diamond Lil" published on 5 April 1928. "Mae West makes Miss Ethel Barrymore look like the late lamented Bert Savoy."
• • Born on 15 August 1879, Ethel Barrymore died in the month of June — — on Thursday, 18 June 1959. Praised for her work on the stage, Ethel was an Academy Award-winning screen actress and a member of the famous Barrymore family.
• • Nope! Mae West never performed at Neir’s • •
• • Mae West never performed at Neir's — — nor did she ever set foot in this all-male bastion of sweaty factory laborers.
• • For decades, laborers went to bars to drink, relax, spit, smoke cigars, curse, discuss politics, and (most importantly) to get away from wives and women.
• • Learn more about Woodhaven, a factory hub during the brief time the West family resided there.
• • LINK: Mae West was never at Neir's
• • Overheard in Hollywood • • 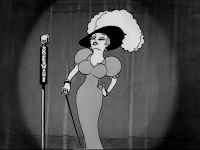 • • Mae West's amazing new contribution to screen history, "Belle of the Nineties," reveals the Paramount screen sensation more beautiful and alluring than ever as the foremost charmer of the gallant Southland of the Gay and Naughty Nineties.
• • In Her Own Words • •
• • Mae West said: "What I did was make fun of sex lightly."
• • Quote, Unquote • •
• • An article about apparel and academia mentioned Mae West.
• • Caroline Evans wrote:  Jane Gallop, professor of English and comparative literature at the University of Wisconsin-Milwaukee, aka "the post-structuralist Mae West," vamps it up on the lecture circuit — — Jane once gave a lecture on psychoanalysis and the phallus dressed in a skirt made of men's ties stitched together.   ...
• • Source: Article: "What not to wear if you want to get on" written by Caroline Evans for TLS Higher Education section; posted on Friday, 18 June 2004
• • The evolution of 2 Mae West plays that keep her memory alive • •
• • A discussion with Mae West playwright LindaAnn LoSchiavo — —
• • http://lideamagazine.com/renaissance-woman-new-york-city-interview-lindaann-loschiavo/

• • The Mae West Blog celebrates its 13th anniversary • •
• • Thank you for reading, sending questions, and posting comments during these past thirteen years. Not long ago, we entertained 3,497 visitors. And we reached a milestone recently when we completed 3,900 blog posts. Wow!
• • By the Numbers • •
• • The Mae West Blog was started thirteen years ago in July 2004. You are reading the 3982nd blog post. Unlike many blogs, which draw upon reprinted content from a newspaper or a magazine and/ or summaries, links, or photos, the mainstay of this blog is its fresh material focused on the life and career of Mae West, herself an American original.