“Sex” by MAE WEST was onstage at Hollywood’s Hudson Theatre until Sunday, 17 June 2018. Naturally, you want to learn what the West Coast critics thought. So here we go. This is Part 10, the finale.
• • Good when she’s bad: Bawdy bard Mae West’s ‘Sex’ appeals • •
• • effectively ruined the movie career of Mae West • •
• • Ed Rampell wrote: According to Gregory D. Black, in the 1930s the imposition of the Hollywood Production Code “effectively ruined the movie career of that saucy favorite, Mae West.” But in our more enlightened age, like the immortal Mae West herself, you too, will enjoy Sex. Why don’t you come up and see it sometime?
• • The role Mae West wrote for herself, Margy LaMont, was portrayed by Buzzworks founder Andrea Hutchman.
• • Ed Rampell wrote: Sex plays Fri. and Sat. at 8:00 pm and Sun. at 7:00 pm through June 17 at the Hudson Theatre Mainstage, 6539 Santa Monica Blvd, Hollywood 90038.
• • This was Part 10. We hope some Mae West fans were able to see her stage play revived in Los Angeles. We'll post a different critic's opinion soon.
• • Source: Stage Review of “Sex” written by Ed Rampell for People’s World; published on Wednesday, 16 May 2018.
• • On Tuesday, 19 June 1934 • • 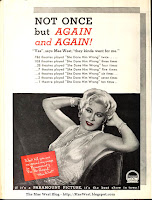 • • The Sydney Morning Herald carried advertisements on page 2 in the issue dated for Tuesday, 19 June 1934 for "I'm No Angel" starring Mae West. Showings were in place at these movie houses in the Sydney, Australia region: the Artarmon (in the suburbs) and the Lindfield. A second feature on this double bill was a film made in Great Britain.
• • Overheard in Hollywood • •
• • Compared to Brando, Beatty or Granger, Mae West was a paragon of the Protestant work ethic. Few worked harder in Hollywood.
• • In Her Own Words • •
• • Mae West said: “It's just bad business to carry a lot of money around Hollywood."
• • Quote, Unquote • •
• • An article from Hollywood mentioned Mae West.
• • "Suggestive Films — American Women Impose Ban" • •
• • "Mae West May Be Dropped" • •
• • Hollywood, June 19th — Hollywood movie companies are alarmed at the effects of a ban of the National Women's Council on famous studios, such as Paramount and United Artists, because of suggestive and indecent pictures they have produced.
• • It is rumored here that the end of the careers of Mae West and Anna Sten, the sensational Russian star, is likely if the ban extends.  ...
• • Source: Article in The Barrier Miner; published on Wednesday, 20 June 1934
• • The evolution of 2 Mae West plays that keep her memory alive • •
• • A discussion with Mae West playwright LindaAnn LoSchiavo — —
• • http://lideamagazine.com/renaissance-woman-new-york-city-interview-lindaann-loschiavo/

• • The Mae West Blog celebrates its 13th anniversary • •
• • Thank you for reading, sending questions, and posting comments during these past thirteen years. Not long ago, we entertained 3,497 visitors. And we reached a milestone recently when we completed 3,900 blog posts. Wow!
• • By the Numbers • •
• • The Mae West Blog was started thirteen years ago in July 2004. You are reading the 3983rd blog post. Unlike many blogs, which draw upon reprinted content from a newspaper or a magazine and/ or summaries, links, or photos, the mainstay of this blog is its fresh material focused on the life and career of Mae West, herself an American original.