No other broadcast of the Charlie McCarthy show has generated more ink than the Sunday, 12 December 1937 broadcast starring MAE WEST.
• • The Mae West Blog has devoted its share of bandwidth to this phenomenon. However, an article written by Martin Grams, Jr. is so insightful and detailed that it eclipses other reportage. We’ll share a portion of his lengthy feature with you, dear Mae-mavens. Prepare to be amazed. This is Part 7 of 12 segments.
• • “The Edgar Bergen and Charlie McCarthy Show: An Episode Guide and Brief History” • •
• • the emotion of a woman going through an orgasm • •
• • Martin Grams, Jr. wrote: What Mae West said wasn’t so bad as how she said it.
• • Martin Grams, Jr. wrote: Telling the serpent that "I feel like doin’ a big apple" was one comment ad-libbed.  But when the serpent got stuck between the picket fences in an attempt to fetch the forbidden fruit, Mae West exclaimed with the emotion of a woman going through an orgasm, "They’re – They’re! Now you’re through!"
• • Martin Grams, Jr. wrote: Edgar Bergen was shocked. "We had to have a star each week," he recalled, "and she seemed a logical choice. She was a sex star. We were fully aware of that. ‘Adam and Eve’ as you probably know, had been performed before without any untoward incidents. Possibly our program being on Sunday and having a little fun with the Bible was dangerous.”
• • she didn’t give the dialogue that Mae West twist until the broadcast • • . . .
• • This article by Mr. Grams will be continued on the next post.
• • Source: Radiogram; rpt by Old-Time Radio’s webmaster; posted on (undated).
• • On Friday, 10 December 1937 • •
• • Mae West failed to report for the first rehearsal of "The Chase and Sanborn Hour" set for Friday evening on 10 December 1937. The suits at NBC were getting nervous and the sponsor's reps were baffled.
• • Overheard in Hollywood • • 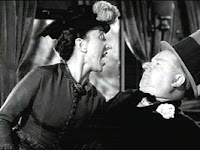 • • In "My Little Chickadee," Margaret Hamilton played the role of prudish Mrs. Gideon, who faints on the train when Flower Belle Lee, Mae's character, pulls out two guns.
• • In Her Own Words • •
• • Mae West said: “Why, in pictures, you don't have to worry about censorship — — much— —once you learn the rules.... In New York they let you go ahead and do it and then they break in and arrest you.”
• • Quote, Unquote • •
• • The Tennessean mentioned Mae West.
• • The Mae West effect helped elect Donald Trump. Now it could defeat him. | Opinion
• • Mae West said: “When choosing between two evils, I always like to try the one I've never tried before.”  . . .
• • Source: The Tennessean; published on Thursday, 21 November 2019
• • The evolution of 2 Mae West plays that keep her memory alive • •
• • A discussion with Mae West playwright LindaAnn LoSchiavo — —
• • http://lideamagazine.com/renaissance-woman-new-york-city-interview-lindaann-loschiavo/

• • The Mae West Blog celebrates its 15th anniversary • •
• • Thank you for reading, sending questions, and posting comments during these past fifteen years. Not long ago, we entertained 3,497 visitors. And we reached a milestone recently when we completed 4,300 blog posts. Wow!
• • By the Numbers • •
• • The Mae West Blog was started fifteen years ago in July 2004. You are reading the 4,363rd blog post. Unlike many blogs, which draw upon reprinted content from a newspaper or a magazine and/ or summaries, links, or photos, the mainstay of this blog is its fresh material focused on the life and career of Mae West, herself an American original.