No other broadcast of the Charlie McCarthy show has generated more ink than the Sunday, 12 December 1937 broadcast starring MAE WEST.
• • The Mae West Blog has devoted its share of bandwidth to this phenomenon. However, an article written by Martin Grams, Jr. is so insightful and detailed that it eclipses other reportage. We’ll share a slim portion of his lengthy, meaty feature with you, dear Mae-mavens. Prepare to be amazed. This is Part 1 of 12 segments.
• • “The Edgar Bergen and Charlie McCarthy Show: An Episode Guide and Brief History” • •
• • Note: “The Chase and Sanborn Hour” was broadcast 8 to 9 pm, EST over NBC. 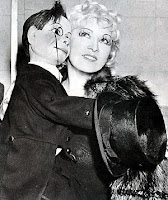 • • Martin Grams, Jr. wrote: Perhaps no other broadcast of the Charlie McCarthy radio show is more popular than the December 12, 1937 broadcast starring Mae West. West rarely appeared on radio and when she did the sole purpose was to promote one of her films. West had appeared on such programs as The Shell Chateau with Al Jolson in 1936 and Louella Parsons’ blackmailing program Hollywood Hotel on April 26, 1935, with featured guest Paul Cavanaugh in an adaptation of the movie “Goin’ to Town.”
• • Martin Grams, Jr. wrote: (On February 21, 1934, the famed Mae West Jewel Robbery was dramatized on Calling All Cars over CBS, without West participating in the drama.) When the producers of The Chase and Sanborn Hour offered the sex goddess the opportunity to appear on the program – then currently the highest-rated program of the year – she accepted, if only to promote her latest film, “Every Day’s a Holiday.”
• • The sex goddess accepted the booking but hated the script • • . . .
• • This article by Mr. Grams will be continued on the next post.
• • Source: Radiogram; rpt by Old-Time Radio’s webmaster; posted on (undated)
• • On Saturday, 2 December 1989 • •
• • "Mae West, Wilt, and the King" was written by Ira Berkow, who had interviewed Charles Miron. This article appeared in The N.Y. Times on 2 December 1989.
• • Overheard in Hollywood • •
• • In "The Heat's On," Miss Mae West is the turbulent musical comedy star caught in the intrigues of two rival crooked producers, played by Victor Moore and William Gaxton.
• • In Her Own Words • •
• • Mae West said: “I don't smoke or drink, and I believe with a passion in myself.”
• • Quote, Unquote • •
• • A stage play in 1933 included mentions of Mae West.
• • The 4-character play "I'll Be Back" by Hyman F. Teague was printed in The Galleon, a literary magazine in Texas. References to Mae West's figure appear in the dialogue.
• • Example: Crokit says: "No gal is flat since Mae West."  …
• • Source: The Galleon (page 17); published in December 1933
• • The evolution of 2 Mae West plays that keep her memory alive • •
• • A discussion with Mae West playwright LindaAnn LoSchiavo — —
• • http://lideamagazine.com/renaissance-woman-new-york-city-interview-lindaann-loschiavo/

• • The Mae West Blog celebrates its 15th anniversary • •
• • Thank you for reading, sending questions, and posting comments during these past fifteen years. Not long ago, we entertained 3,497 visitors. And we reached a milestone recently when we completed 4,300 blog posts. Wow!
• • By the Numbers • •
• • The Mae West Blog was started fifteen years ago in July 2004. You are reading the 4,357th blog post. Unlike many blogs, which draw upon reprinted content from a newspaper or a magazine and/ or summaries, links, or photos, the mainstay of this blog is its fresh material focused on the life and career of Mae West, herself an American original.