“Is MAE WEST Skidding on the Curves?” Asks Madame Sylvia, Photoplay's Beauty Editor, in the next issue. And her answer offers a wealth of practical advice to all women — young and old, fat and lean. Whether or not you're concerned over your own appearance, you'll thoroughly enjoy Madame Sylvia's keen, clear-cut comments in the November 1936 issue. This is Part 4.
• • skidding on the curves • •
• • Sylvia wrote: And what did I care, you may be asking, whether Mae West was skidding on the curves? Will her brand of popularity return? Should a screen actress be slim as a sylph or big as a blimp?
• • Sylvia wrote: Right, it was easy to see Mae West was going way too far in "Klondike Annie." Also, in her new picture, "Go West Young Man," with Randolph Scott, she has the best vehicle she's had in ages. Will her brand of popularity return? 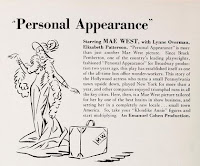 • • Sylvia wrote: Should a movie star be as slim as a sylph — — or big as a blimp? I cared only because of the effect on you, my darling readers. Mae was a marvelous excuse for other women. She was an elegant alibi. She was a comfortable, cushioned way out for all the girls who were getting too fat and were too lazy to do anything about it.
• • If a movie star is not slim, to heck with dieting! • •  . . .
• • “Is Mae West Skidding on the Curves?” will be continued on the next post.
• • Source: Photoplay; published in the issue dated for November 1936.
• • On Friday, 17 June 1932 • •
• • Mae West would, no doubt, be capable of delivering "curdling melodrama," predicted the publication Hollywood Citizen News in its issue dated Friday, 17 June 1932.
• • Overheard in Hollywood • •
• • Only when a young female fan told Mae West she had seen her play “Diamond Lil” at the Museum of Modern Art did Miss West show her toughness. "Whaddya mean, a 'museum’?"
• • In Her Own Words • •
• • Mae West said: "Don't cry for a man who's left you — — the next one may fall for your smile."
• • Quote, Unquote • •
• • Photoplay Magazine mentioned Mae West.
• • Mike at Hollywood • •
• • "Mae West made her one and only appearance on the radio for me in 1936 and put on a swell show. The script called for her to kiss Paul Cavanaugh. As you know, on the radio what you have to do is to make a sound like a kiss. Mae, at a distance of six feet from Paul, went through all the motions which would indicate extreme romantic fervor. She convulsed the audience. The applause drowned out her kiss.” . . .
• • Source: Photoplay;  published in the issue dated for October 1936
• • The evolution of 2 Mae West plays that keep her memory alive • •
• • A discussion with Mae West playwright LindaAnn LoSchiavo — —
• • http://lideamagazine.com/renaissance-woman-new-york-city-interview-lindaann-loschiavo/

• • The Mae West Blog celebrates its 14th anniversary • •
• • Thank you for reading, sending questions, and posting comments during these past fourteen years. Not long ago, we entertained 3,497 visitors. And we reached a milestone recently when we completed 4,200 blog posts. Wow!
• • By the Numbers • •
• • The Mae West Blog was started fourteen years ago in July 2004. You are reading the 4236th blog post. Unlike many blogs, which draw upon reprinted content from a newspaper or a magazine and/ or summaries, links, or photos, the mainstay of this blog is its fresh material focused on the life and career of Mae West, herself an American original.