On Thursday, 12 July 2018, MAE WEST’s photos and quotes led off an intriguing article on fashion and the use of animals and silkworms.
• • Living in an immaterial world, what materials matter? • •
• • Jackie Mallon wrote:  Thirty-odd years ago Madonna sang about living in a material world while wrapped in hot pink satin, nuzzling fur, dripping in jewels, and being hoisted into the air by a posse of suited men. She was mimicking her idol Marilyn Monroe, who thirty-odd years before that, dressed similarly, had sung about diamonds being a girl’s best friend in the movie “Gentlemen Prefer Blonds.” Flash back another thirty and an equally vampish, blonde, Mae West, responded to the exclamation of “Goodness!” from an admirer, with the statement “Goodness had nothing to do with it.”  Goodness nothing to do with glamour? 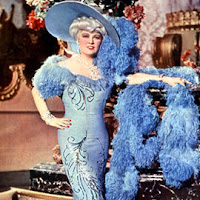 • • Jackie Mallon wrote: Mae West was right. Throughout history female glamour has been a ruthless death match in which the major players were dressed to the nines in a patchwork of scalps, skins, and token body parts from the planet’s most vulnerable creatures. The glamour we aspired to was a trophy to destruction. . . .
• • Source:  Article for Fashion United UK published on Thursday, 12 July 2018.
• • On Wednesday, 26 July 1950 • •
• • On Wednesday, 26 July 1950, Guido Deiro, age 63, died after a long illness. He was Mae West's secret Italian husband, at one time a vaudeville headliner, a composer, and a recording artist for Columbia Records. Mae West married Guido Deiro after her relationship with Frank Wallace (husband # 1) fell apart.
• • Overheard in Hollywood • •
• • Mae West enjoyed a long career that far outlasted any of her contemporaries, such as singer Al Jolson and comedian Ed Wynn, both men who started at the same time as she did during the heyday of vaudeville and burlesque.
• • In Her Own Words • •
• • Mae West said: "It's not the men in my life, it's the life in my men."
• • Quote, Unquote • •
• • Mae West's next film will be "The Queen of Sheba" • •
• • A writer with the pen name "Close-Up" offered this tidbit to film fans on Wednesday, 25 July 1934: I understand that Mae West's next film will be "The Queen of Sheba." That is not a joke. My information is that "the production will not be burlesque, and the star will give a 'straight' characterisation." Clearly Miss West is ambitious; but her ambition may lead her into trouble.
• • Close-Up continued: She made her name in "She Done Him Wrong" and "I'm No Angel" as a type which the Americans describe as a "hot momma." Whether she will be able to change herself into the Queen of Sheba, an exotic brunette with rolls of pearls and no Bronx accent is a question that I would not care to decide in advance.  . . .
• • Source: "Notes on the Screen" in The Argus on page 5; published in Australia on Wednesday, 25 July 1934
• • The evolution of 2 Mae West plays that keep her memory alive • •
• • A discussion with Mae West playwright LindaAnn LoSchiavo — —
• • http://lideamagazine.com/renaissance-woman-new-york-city-interview-lindaann-loschiavo/

• • The Mae West Blog celebrates its 14th anniversary • •
• • Thank you for reading, sending questions, and posting comments during these past fourteen years. Not long ago, we entertained 3,497 visitors. And we reached a milestone recently when we completed 4,000 blog posts. Wow!
• • By the Numbers • •
• • The Mae West Blog was started fourteen years ago in July 2004. You are reading the 4010th blog post. Unlike many blogs, which draw upon reprinted content from a newspaper or a magazine and/ or summaries, links, or photos, the mainstay of this blog is its fresh material focused on the life and career of Mae West, herself an American original.