While you’re sleeping, college professors in Hungary are thinking about MAE WEST. Here’s a long, striking research paper you might have missed. This is Part 2.
• • "Mae West. The Dirty Snow White" • •
• • Written by:  Zsófia Anna Tóth
• • Mae never shied away from getting dirty • •
• • Zsófia Anna Tóth wrote: According to many of her critics, she could not sing or dance or act well; moreover, she was not even especially beautiful or photogenic.  Yet, she was able to make her audiences believe she was the best in doing all these things. Her overwhelmingly amazing personality and star persona as well as her entertaining skills and humor made those who heard or saw her believe anything she wanted them to believe. She was a prime entertainer and a great humorist — — and this is where her greatness lies.
• • Zsófia Anna Tóth wrote: This is the root of another contradictory aspect of West’s art involving her star persona: while she is generally considered to be a very feminine woman, a sex goddess with an ample appetite for men, she is also considered to be a ‘bad woman’ and a prostitute although her intellectual abilities combined with her heightened sense of humor makes her seem ‘masculinized’ and this questions her other feminine allures and, thus, her sex appeal also.
• • Mae’s use of humor: is it “masculinized”? • • . . .
• • This was Part 2 of a lengthy article. Part 3 will follow tomorrow.
• • Source: Americana — — E-Journal of American Studies in Hungary; Vol. XI, No. 1, Spring 2015.
• • On Monday, 6 February 1928 • •
• • Mae West mailed her manuscript for "Diamond Lil" to the Library of Congress from the Harding Hotel, West 54th Street, New York, NY. The date of her Washington, DC copyright registration is Monday, 6 February 1928. The play opened on Broadway in April 1928.
• • Overheard in Hollywood • •
• • Mae West said that she fractured her left ankle and suffered lacerations and abrasions in tripping over a floor mat.
• • In Her Own Words • •
• • Mae West said:  "A man in the house is worth two in the street."
• • Quote, Unquote • •
• • The Indy Star mentioned Mae West.
• • Weird lives of Hoosier muscle men • • 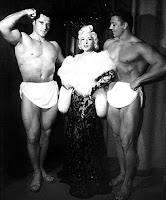 • • Mickey Hargitay (1926-2006) This Hungarian-born body builder parlayed his muscled physique into Hollywood stardom, appearing in films . . .  none of them super well-received.
• • It was in Indianapolis where Hargitay, as a young man in 1947, began lifting weights. He worked hard at it. His biceps got so they were 18 inches around. He won the Mr. Universe title in 1955, a feat that brought him to the attention of aging Hollywood sex symbol Mae West.
• • Hargitay joined Mae West's night club act. His costume was a loin cloth. . . .
• • Photo: Mickey Hargitay is on the right.
• • Source: Item in the Indy Star; published on Tuesday, 30 January 2018

• • The Mae West Blog celebrates its 13th anniversary • •
• • Thank you for reading, sending questions, and posting comments during these past thirteen years. Not long ago, we entertained 3,497 visitors. And we reached a milestone recently when we completed 3,800 blog posts. Wow!
• • By the Numbers • •
• • The Mae West Blog was started thirteen years ago in July 2004. You are reading the 3891st blog post. Unlike many blogs, which draw upon reprinted content from a newspaper or a magazine and/ or summaries, links, or photos, the mainstay of this blog is its fresh material focused on the life and career of Mae West, herself an American original.