Could a movement in Australia end the career of MAE WEST? All of a sudden the screen queen was being attacked by The Women's Vigilant Society.  Here's the article published by The Australian Women's Weekly on Saturday, 7 July 1934.
• • "Mae West Rouses Ire of Victorian Women" • •
• • Mae West may go west in Australia soon if Victorian women follow the example of America, and if the other States follow Victoria. The present popular phrase, "Come up and see me sometime," will fade away to oblivion, and Mae West will be allowed on the screen only in the most proper of roles. 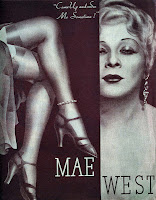