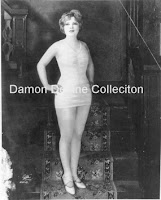 This month, when a revival of the 1926 play "SEX" by Mae West is pulling in theatre-lovers nightly to the Aurora Theatre in Berkeley, it's a good time to revisit the sexpot's lesser known Broadway appearance as the headstrong, cocaine-loving character Babe Carson in "The Wicked Age," which opened [and closed, alas] during November 1927.
• • To control production costs, Mae West hired vaudevillians who were down on their luck. The performers included her former teacher Hal Clarendon and Marjorie Main (whose maturity fortified her portrayal of Ma Kettle in the movies).
• • Time Magazine, in an article "New Plays In Manhattan," had the brickbats ready.
• • Time gave Mae an unvarnished Bronx cheer: "The Wicked Age. Mae West betrayed her public. Sex, which she wrote and in which she acted, was very dirty and very dull. She went to jail for it. Her new play is about bathing beauty contests. The greasy gathering that assembled, itchingly expectant for the first performance, was disconsolate. Her cheap, shiftless talent is useless to them now. She has cleaned it up . . . [Monday — 14 November 1927 — Time Magazine].
• • "The low point of the theatrical season of 1927—1928," sneered The New York Times.
• • "A choice piece of limburger," hissed Variety.
• • How did Mae West feel, clobbered by the critics? With fortitude, she went on.
• • Come up and see Mae every day online: http://MaeWest.blogspot.com/
________
Source:http://maewest.blogspot.com/atom.xml
Mae West
• • Photo: • • Mae West • • 1927 • •
NYC
Mae West.