Mae West and "Nobody" 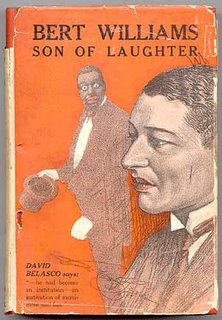 • • In an interview with Charlotte Chandler, Mae described meeting the great Bert Williams when she was a child. Little Mae was so enchanted by him that she had learnt his theme song "Nobody" along with copying the superb timing and gestures that Bert Williams used to dramatize the sad words. This number was unusual for Mae, who never liked anything downbeat.
• • Knowing how much his daughter idolized the star, Mae's father made his acquaintance and invited him home in 1903. Unfortunately, Mae did not recognize the mocha-skinned West Indian entertainer without his blackface make-up and ran into her room crying, "It's not him!" To convince her, Bert Williams started to sing, whereupon Mae emerged from her bedroom and happily sat down to supper with Bert Williams and her family.
• • Bert Williams went on to star on Broadway in the Ziegfeld Follies and In Dahomey. Mae West remained a lifelong admirer of his comedic talents.
• • [Source: Charlotte Chandler, The Ultimate Seduction, Doubleday, 1984.]
• • Nobody: Since she sang the song for years in vaudeville as an amateur, Mae West would have known that Alex Rogers and Bert Williams co-wrote the song "Nobody" [New York: Attucks Publishing Co., 1905]. Though the cover of the song sheet shows Williams in blackface, it avoids the grotesque caricatures common in sheet music at the time. The song was published by the Attucks Publishing Co. (later Gotham-Attucks), the only notable black-owned music publishing company in New York before the 1920s. The firm was named for Crispus Attucks [c. 1723 – 5 March 1770], the martyred black sailor of the American Revolution. "Nobody" was the firm's biggest success.
• • Come up and see Mae every day online: http://MaeWest.blogspot.com/
________
Source:http://maewest.blogspot.com/atom.xml
Mae West
• • Photo: • • Mae West's idol • • Bert Willaims • •
NYC
Mae West.