While you’re sleeping, college professors in Hungary are thinking about MAE WEST. Here’s a long, striking research paper you might have missed. This is Part 28.
• • "Mae West. The Dirty Snow White" • •
• • Written by:  Zsófia Anna Tóth
• • a close tie between the comic and the devil • •
• • Zsófia Anna Tóth wrote: Mikhail Bakhtin is also of the opinion that there is a close tie between the comic and the devil since in several medieval literary forms a jolly devil figure was frequently present, whose function was to represent “the unofficial point of view” (41). Moreover, Jean Paul also adds that “the greatest humorist of all would be the devil” (qtd. in Bakhtin 42).
• • the figure of "the tempter" • •
• • In this regard, Wylie Sypher argues that the fool, the jester and the devil are all closely related, and the “tempter” figure often “disguises himself as clown or devil” (236).
• • Zsófia Anna Tóth wrote:  According to Ágnes Matuska, the Vice — — despite its roots in the morality plays and its function as the allegory of Sin — — was a clownish, jocular, zany and ludicrous character, who served as an interlocutor and mediator between the performers and the audience during the Tudor period, and whose task was to make people get involved into the events of the carnival or the story/performance of a drama/play by being intelligent, artful, shrewd and witty (2007).
• • being very sexual and erotic • •  . . .
• • This was Part 28 of a lengthy article. Part 29 will follow tomorrow.
• • Source: Americana — — E-Journal of American Studies in Hungary; Vol. XI, No. 1, Spring 2015.
• • On Saturday, 14 March 1914 in The Columbus Ledger • • 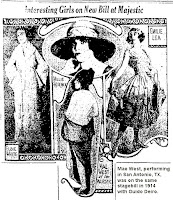 • • Throughout 1914 Mae and Guido were engaged jointly as headliners on the Loew circuit. They were touring in Columbus, Ohio in mid-March when they teasingly circulated the rumor that the accordionist was really "Count Deiro" — — hey, anything to attract a reporter and set yourself apart. The spoof worked and they got a write-up in The Columbus Ledger, on Saturday, 14 March 1914.
• • Maybe Frank Wallace saw that very newspaper.
• • Overheard in Hollywood • •
• • Jack Powell was the highest paid drummer in America, entertaining along with Mae West and Bing Crosby.
• • In Her Own Words • •
• • Mae West said: "They talk about me being married. Would any woman in danger of a husband dare get furniture like that? It's ladylike and would be plain ruined if some man put his big shoes on it. I don't waste money that way."
• • Quote, Unquote • •
• • A British reporter talked about Mae West.
• • “My tea with Mae West by Caroline Boucher” • •
• • It's tricky to interview a Hollywood star when you're surrounded by nude sculptures of her.
• • Her teatime outfit might have been formal, but Mae West's conversation was anything but. Within minutes of my arriving at her Hollywood penthouse one afternoon in 1974, she was lugging her exercise bicycle out of the dining room to prove her daily fitness routine: never mind that she was 83 and the bicycle was covered in a thick film of dust.
• • But she did look amazing.  …
• • Source: Article in The Observer (UK); published on: Sunday, 14 March 2010
• • The evolution of 2 Mae West plays that keep her memory alive • •
• • A discussion with Mae West playwright LindaAnn LoSchiavo — —
• • http://lideamagazine.com/renaissance-woman-new-york-city-interview-lindaann-loschiavo/

• • The Mae West Blog celebrates its 13th anniversary • •
• • Thank you for reading, sending questions, and posting comments during these past thirteen years. Not long ago, we entertained 3,497 visitors. And we reached a milestone recently when we completed 3,800 blog posts. Wow!
• • By the Numbers • •
• • The Mae West Blog was started thirteen years ago in July 2004. You are reading the 3917th blog post. Unlike many blogs, which draw upon reprinted content from a newspaper or a magazine and/ or summaries, links, or photos, the mainstay of this blog is its fresh material focused on the life and career of Mae West, herself an American original.