The Pacific Northwest decided to offer a new production of “Sex” written by MAE WEST and her collaborator Adeline M. Leitzbach in 1926. Let’s learn more. This is Part 6 of 7. Errors made by Wendy Leigh have been corrected.
• • ‘SEX’ appeals at WICA • •
• • desire to honor women pioneers who shattered our ‘traditional’ roles • •
• • Wendy Leigh wrote: “I cannot stress enough, however, that we are blessed that so many incredibly talented professional or professional-level actors, directors, and designers call Whidbey Island home,” Duncan said.
• • Wendy Leigh wrote: She also explained the inspiration for bringing productions like “SEX” to WICA, along with upcoming shows this season: David Ossman’s adaptation of “It’s a Wonderful Life”; “Red,” directed by Vito Zingarelli and featuring Andrew Grenier; “A Doll’s House”; and “A Doll’s House, Part 2.”
• • Wendy Leigh wrote: “The inspiration for the season was sparked by one great story that captured my heart and mind and the desire to honor the women pioneers who defined, refined, or shattered our ‘traditional’ roles,” Duncan said.
• • explores current issues • • …
• • This stage review by Wendy Leigh will be concluded on the next post, which is the seventh.
• • Source: South Whidbey Record; published on Friday, 11 October 2019.
• • On Saturday, 14 November 1936 • •
• • Trade paper Motion Picture Herald reviewed the Mae West movie "Go West Young Man" in their issue dated for Saturday, 14 November 1936. Among their unkind remarks was this punch: "Incidentally, the fight with obesity seems to be getting her down." Ouch.
• • Overheard in Hollywood • • 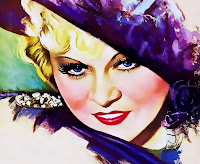 • • Long ago the "it" girl of the silent screen, Clara Bow, and later Jean Harlow seriously challenged Mae West for the "queen of sex" title, but Mae West won through.
• • In Her Own Words • •
• • Mae West said: "Me, I have a genuine sex personality."
• • Mae West said: “I see good in every man. That's why I'm not married."
• • Quote, Unquote • •
• • An Irish daily mentioned Mae West.
• • Remembering the original diva Mae West — — and the acid-tongued iconoclast's huge writing talent.
• • As a collection of Mae West's possessions goes under the hammer, Julia Molony tells of the acid-tongued iconoclast's huge writing talent …
• • Source: Independent (Ireland); published on Wednesday, 30 October 2019
• • The evolution of 2 Mae West plays that keep her memory alive • •
• • A discussion with Mae West playwright LindaAnn LoSchiavo — —
• • http://lideamagazine.com/renaissance-woman-new-york-city-interview-lindaann-loschiavo/

• • The Mae West Blog celebrates its 15th anniversary • •
• • Thank you for reading, sending questions, and posting comments during these past fifteen years. Not long ago, we entertained 3,497 visitors. And we reached a milestone recently when we completed 4,300 blog posts. Wow!
• • By the Numbers • •
• • The Mae West Blog was started fifteen years ago in July 2004. You are reading the 4,345th blog post. Unlike many blogs, which draw upon reprinted content from a newspaper or a magazine and/ or summaries, links, or photos, the mainstay of this blog is its fresh material focused on the life and career of Mae West, herself an American original.