The Pacific Northwest decided to offer a new production of “Sex” written by MAE WEST and her collaborator Adeline M. Leitzbach in 1926. Let’s learn more. This is Part 2 of 7. Errors made by Wendy Leigh have been corrected.
• • ‘SEX’ appeals at WICA • •
• • Slumming It in the seedy part of Montreal • •
• • Wendy Leigh wrote: Director and producer Edward Jordan adapted and directs the current version of the play after racking up 11 international screenwriting awards and numerous accolades to date. With this production of “SEX,” he joins forces again with his “Bollywood and Vine” film star and veteran actress Skye Aubrey. She takes on the part of Clara, a high-society dame who was caught “slumming it” in the seedy part of Montreal and becomes beholden to prostitute Margy for saving her life.
• • Wendy Leigh wrote: When “SEX” first premiered onstage in New York City, America was just seven years past the suffrage amendment giving women the right to vote, and West’s play jolted “polite society” on a new level. By condoning a newfound viewpoint that “fallen women” need not end up in ruin and disgrace, the play wreaked havoc on accepted norms.
• • Mae West was light years ahead of the times • •  …
• • This stage review by Wendy Leigh will be continued on the next post.
• • Source: South Whidbey Record; published on Friday, 11 October 2019.
• • On Sunday, 8 November 1931 in Brooklyn • •
• • The Brooklyn Daily Eagle recalled in its archives that on Sunday, 8 November 1931 Mae West performed her play "The Constant Sinner" in Brooklyn's Majestic Theatre.
• • Overheard in Hollywood • •
• • Her take-off on Eva Tanguay, the unrestrained, hippy favorite of soldiers, sailors, college boys and tired business men of that day, invariably won her the greatest applause. It practically gave Mae West her start in show business.
• • In Her Own Words • • 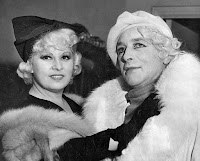 • • Mae West said: “What I have between my legs wasn’t put there by no surgeon. All of it is the real thing!”
• • Mae West said: “Love conquers everything — — except poverty and toothaches.”
• • Quote, Unquote • •
• • An Ohio newspaper mentioned Mae West, whose Bowery saloon movie will be shown on Saturday, 9 November 2019.
• • Cinema at the Stroede will present the classic Mae West film “She Done Him Wrong,”
at 7:30 p.m. Nov. 9, 2019. This 1933 crime/comedy is filled with both melodramatic and musical elements.
• • Where: Stroede Center for the Arts, 319 Wayne Avenue, Defiance, OH …
• • Source: The Crescent-News (Ohio); published on Friday, 1 November 2019
• • The evolution of 2 Mae West plays that keep her memory alive • •
• • A discussion with Mae West playwright LindaAnn LoSchiavo — —
• • http://lideamagazine.com/renaissance-woman-new-york-city-interview-lindaann-loschiavo/

• • The Mae West Blog celebrates its 15th anniversary • •
• • Thank you for reading, sending questions, and posting comments during these past fifteen years. Not long ago, we entertained 3,497 visitors. And we reached a milestone recently when we completed 4,300 blog posts. Wow!
• • By the Numbers • •
• • The Mae West Blog was started fifteen years ago in July 2004. You are reading the 4,341st blog post. Unlike many blogs, which draw upon reprinted content from a newspaper or a magazine and/ or summaries, links, or photos, the mainstay of this blog is its fresh material focused on the life and career of Mae West, herself an American original.