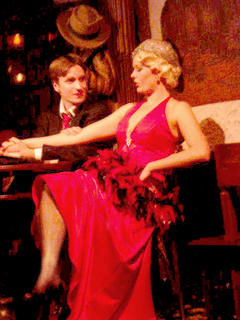 In the noh
When West Meant Best
Mae’s birthday party . . .
By DAVID NOH

The evening also included an excerpt from LindaAnn Loschiavo’s play, “Courting Mae West,” and, in the title role, charming 24-year-old Marta Reiman had the old girl down, from the snowy, shifting shoulders to those rollercoaster eyeballs.

That we now live in the most debased of times was proven without a doubt by the recent Comedy Central TV Friars’ Roast of Pamela Anderson. Although The New York —don’t you know, we’re really hip, too!— Times saw fit to give it front page arts coverage, this one really scraped bottom as a craven display of vulgarity with Anderson’s ex, Tommy Lee, complacently listening to and adding his own crass references about her vagina and her fellatio expertise. A desperate Andy Dick actually gropes her famous breasts for a TV eternity. What hath Mae West, that pioneering female sex crusader, wrought?

MAE WEST was an original and a brave pioneer and on August 17, Bill’s Gay Nineties restaurant honored film icon Mae West on the occasion of the 112th anniversary of her birth.

These thoughts kept occurring to me as I joined the celebration of what would have been West’s 112th birthday on August 17 at Bill’s Gay Nineties restaurant, the perfect Belle Époque townhouse setting on East 54th, with its gaslight fixtures and vintage posters––Nazimova, Billie Burke, Olga Nethersole, Mary Garden in “Louise.”

All of us owe West, an original if ever there were one, a huge debt of gratitude, for not only breaking down puritanical barriers as a fully empowered, healthily lusty lady, but for all the sheer joy her comic writing and performances have given generations of fans. Her 1926 Broadway play “Sex” landed her in jail as a “lewd corrupter of youth,” while her follow-up work, “The Drag,” was an early attempt to deal with the subculture of homosexuality and cross-dressing, culminating in a big onstage drag ball.

West made her film debut in 1932 when she was nearly 40 with a slightly simian face and fulsome figure that were anything but conventionally beautiful, and yet managed to effectively wipe all her contemporaries off the screen. And she did it with a gift that is fast -- disappearing from our contemporary culture –– true wit, which relied more on a sly suggestiveness and faultless timing than any gross display of t & a or toilet humor.

West’s two best films are “She Done Him Wrong” and, especially, “I’m No Angel,” in which she plays Tyra––yes, the supermodel Banks was named after this character––who tames lions and every man in Manhattan. These pre-Hays Code nifties celebrated Mae in all her unabashed, ogling glory and, if there’s a more delightful film scene than the one in “I’m No Angel,” wherein she shimmies with her cadre of maids to “I Found a New Way to Go to Town,” I don’t know what that is.

Even her films made after censorship bit down hard on her are worth watching, like her engaging “Goin’ to Town” (1935). It includes her jaw-dropping rendition of the aria from “Samson et Delilah,” “Mon coeur s’oeuvre a ta voix,” unrivalled for brazen diva chutzpah until Aretha Franklin’s version of “Nessun dorma” at the 1998 Grammy Awards.

Marta Reiman, a charming 24-year-old actress, had Mae West down cold -— from the shifting shoulders to those rollercoaster eyeballs -— in an excerpt from LindaAnn Loschiavo’s play, “Courting Mae West,” presented at the West tribute at Bill’s Gay Nineties.

Show biz vet Joe Franklin recalled the time the diminutive West appeared on his show, with her muscleman companion towering above her: “She said, ‘Joe, This man’s 6 feet 8, I’m 5 feet tall, and he’s nuts over me,’ and this was on live TV!”

The Tulsa, Oklahoma native, a newcomer to New York, said, “I knew what Mae West looked like, but hadn’t watched any of her movies. Now I’ve seen all of them and, honestly, this is the most fun role I’ve ever played. She was a fabulous comedienne, and I love that she not only was a star, but broke so many barriers with ‘Sex,’ and was always pushing the envelope with censorship. I admire that and the fact that she was a writer and producer as well, and had complete control over her work, which I hope to do.”
Contact David Noh at Inthenoh@aol.com.
gaycitynews.com
- published in Gay City News | 487 Greenwich St. | New York, NY 10013 -
http://maewest.blogspot.com/atom.xml
mae west
Technorati Profile
Posted by Mae West NYC at 2:56 AM No comments: 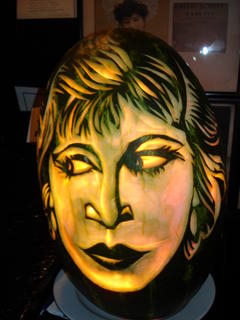 This stunning MAE WEST carving was created for the Mae West Birthday Gala by a NYC master carver Hugh McMahon. For twenty years, Mr. McMahon has been carving pumpkins for Hallowe'en Howls and other occasions but he used a watermelon to render this sculpture of Brooklyn-born Mae West, dramatically lit with a low-wattage bulb.
What a great photo opportunity this was at the MAE WEST BIRTHDAY GALA, huge thanks to Hugh.
.
Want to hire sculptor Hugh McMahon for your event?
Hugh McMahon: T: 718-625-6171 or E: hmcmahonp@hotmail.com
Posted by Mae West NYC at 3:29 PM No comments: 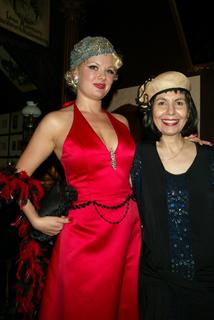 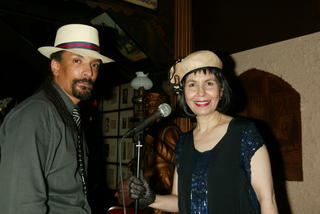 Usually working effectively backstage and behind the scenes on all aspects of "COURTING MAE WEST" is a versatile, indispensable man: Conrad Bradford.
And he deserves a big round of non-stop applause.
PHOTO: Conrad Bradford and LindaAnn Loschiavo on August 17, 2005 at the Mae West Gala
PHOTO: Actress Marta Reiman - in the role of MAE WEST - poses with dramatist LindaAnn Loschiavo who wrote "COURTING MAE WEST" on August 17, 2005
All photos © Joseph Marzullo / All Rights Reserved.
http://maewest.blogspot.com/atom.xml
Posted by Mae West NYC at 8:53 PM No comments: 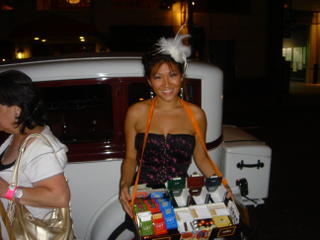 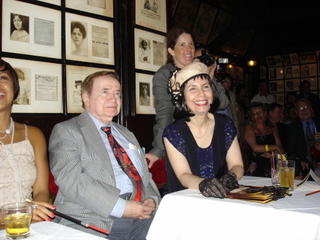 Thanks to the wonderful sponsors who amplified the enjoyment at the Mae West Gala on August 17th, when Act I, Scene 1 [the speakeasy scene set in 1926] from the comedy "Courting Mae West" was shown to a Manhattan audience, most of whom came attired in colorful Prohibition Era garb to complement the play's 1920s setting as well as the venue: Bill's Gay Nineties, an original New York speakeasy on East 54th Street. 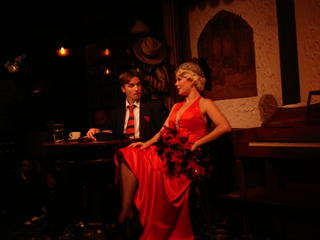 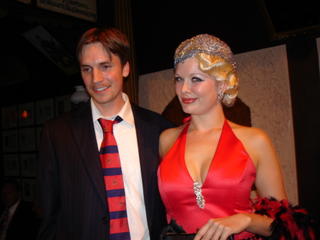 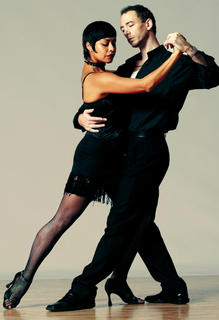 Mae West says: When I have a birthday, I want the right people in the room. And these two do a tango that makes me tingle. Summertime feels hotter when I'm watching Talia Castro-Pozo dance with Jules Helm. Mmmmmm.
http://maewest.blogspot.com/atom.xml
mae west
Posted by Mae West NYC at 7:21 AM No comments:

Come Up & See Mae on Her Birthday

Come Up and See Mae on August 17th, Her Birthday
http://maewest.blogspot.com/atom.xml
mae west
Posted by Mae West NYC at 5:31 PM No comments: 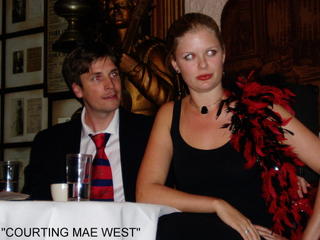 
New York, NY: Spirits will rise in midtown Manhattan at 7:00 PM on August 17th during the Mae West Birthday Gala at Bill’s Gay Nineties when Joe Franklin, Louise Lasser, and other entertainment industry VIPs gather to pay tribute to Mae West [1893-1980], who performed live in vaudeville and on Broadway as well as in movies.

Earlier, however, spirits of a different sort will be aroused when Dr. Lauren Thibodeau conducts a séance in this haunted mansion on East 54th Street. Built in 1888, and always owner-occupied, there is a full house shared by the living [Barbara Bart and the staff of Bill’s Gay Nineties] – and the undead: two playful girls clad in white dresses along with other noisy entities.

Restaurant manager Aldo Leone, whose work keeps him on the first and second floor, had not known about the ghosts – until recently. But bartender Rich and Elizabeth, a longtime waitress who exercises on the third floor, see and hear these supernatural inhabitants regularly.

Headwaiter Sergio, serving a table of ten last week, turned back towards the kitchen and noticed a light outline of a girl in white, her face so brightly white that her features were indistinguishable. As he tried to beckon a busboy, the girl vanished.

Actress MARTA REIMAN, who plays MAE WEST on August 17th, said she "feels someone" behind her when she's changing her clothes on the third floor.

On August 17th, it will be interesting to see who shows up, said JOE FRANKLIN, who will discuss his friend Mae West after a mini-performance of “Courting Mae West” and a full program of lively Prohibition era entertainment. Since Bill’s Gay Nineties is an original New York speakeasy, strolling Cigarette Girls and other prohibited delights will be on hand.

Tickets to this Benefit are available via PayPal.
Information is online: http://MaeWest.blogspot.com

Sex with Mae West for the British

Sex with Mae West, Acoustic Music Centre at St. Bride's
.
As a one-woman one-liner industry, Mae West is a gift to any actress-singer who wants to talk dirty. And a good few of the one-liners are here in a show that presents the Hollywood sex goddess as a raunchy rhythm-and-blues singer in an ill-starred relationship with a jump-jive saxophone-playing W C Fields.
Unfortunately, Corliss Randall doesn't, as it were, rise to the occasion.
Randall's idea of going West consists of teetering around, pawing her audience and saying "aw" as if in a permanent state of semi-arousal. Randall has the required pneumatic assets and she belts out her songs with some gusto. But at the moment her band is carrying the show and she needs to work a whole lot harder at making West more than a one-dimensional character with a not very convincing wig.
Ends August 21.
written by: ROB ADAMS
printed in: The Herald [U.K.] August 11 2005
- - from http://www.theherald.co.uk/ - -
- - Come Up & See Mae on August 17, 2005 - -
http://maewest.blogspot.com/atom.xml
mae west
Posted by Mae West NYC at 2:52 PM No comments:

It was 2 August 1944.
Mae West adds to the wartime summer heat with her bawdy comedy Catherine Was Great, which co-stars West and her leading man, acctor Gene Barry.
[The play will run 191 performances.]
- - Come Up & See Mae on August 17, 2005 - -
http://maewest.blogspot.com/atom.xml
mae west
Posted by Mae West NYC at 2:51 AM
Newer Posts Older Posts Home
Subscribe to: Posts (Atom)