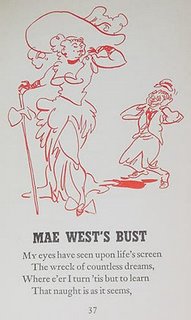 There is an unusual ribald poetry book called “Rowdy Rhymes” -- playfully illustrated by John Barron. Published by Peter Pauper Press during the 1950s, the 62-page hardcover includes unconventional verse such as: Mae West’s Bust; Twin Buttes; Her Mother Never Told Her; The Saga of Rex (a dog and his urination habits); Roll Your Leg Over; The Old Backhouse (outhouse); Ballad of Yukon Jake; the Quartermaster Song; and other silly stanzas.
- -
http://maewest.blogspot.com/atom.xml
Mae West
Mae West. 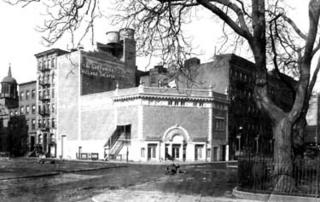 It was the summer of 1922 and Mae West was about to celebrate her 29th birthday. Hungry for stardom and going nowhere in vaudeville, Mae bit the bait: a chance to star in a play The Ginger Box that could make her a star. According to biographer Emily Wortis Leider, The Ginger Box served up wall-to-wall Mae West. In addition to featuring her as Circe, turning her lovers into swine, it presented Mae West as a Broadway vamp (played to Harry Richman's victim), Mae West singing "I want a Cave Man," Mae West clowning Tommy Gray's "I'm a Night School Teacher," and torching a song whose regretful tone she would later rule out: "Sorry I Made You Cry." Major troubles were afoot, however, and revealed themselves during a two-performance try-out in Connecticut. Also, the flam-flam producer Edward Perkins was perpetually short of funds and vanished, leaving unpaid debts and I-owe-you notes to his cast. Ginger Revue Now a Pepless Stew as Promoter Disappears announced the New York Daily News [August 13, 1922]. Thirteen Equity actors sued Perkins to recover their salaries -- but not Mae, who was to have received a percentage of the box office.

The Greenwich Village Theatre was made famous by female impersonator Bert Savoy who performed in the acclaimed "Greenwich Village Follies" there, an annual revue that was so popular that it moved to Broadway. Located until 1930 on the western side of Seventh Avenue South where Christopher Street kisses West Fourth, it faced Sheridan Square. During the 1920s, the outstanding success of this cultural outpost put Sheridan Square on the map as a mecca for avant-garde entertainment. A fierce financial beast - the Wall Street crash in 1929 - killed this beauty. 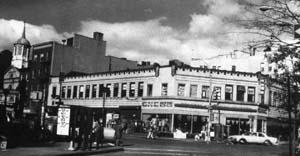 Photos show the former theatre as well as the plain-jane that replaced it in 1931.
- -
http://maewest.blogspot.com/atom.xml
mae west
Mae West.

Like most writers or actors, Mae West didn't want to be ignored. That was never a problem for "Sex," her show that is being revived locally in Michigan.

As soon as it opened in 1926, it drew comment.
It was "feeble and disjointed," the New York Times said.
It was a "disgrace," the New Yorker said.
Walter Winchell called it "a vulgar affair ... amateurish in script and cast."
The Daily Mirror, a Hearst paper, was less mellow. This was, it said, "a monstrosity plucked from the garbage can, destined for the sewer."

"It looked at the social mores of the time," said Jeff Croff, the Icarus Falling artistic director. "They shut it down for indecency; now people wouldn't raise an eyebrow."

Even back then, people weren't sure. The first attempt to close "Sex" failed; officials barely missed getting the required three-fourths vote of a citizens' panel.

After making a fortune on the show, West was fined $500 and sentenced to 10 days in jail. "This will be the making of me," she said.

That would take a while. Five years later, nearing 40, West began a string of movies in which she often wrote her own lines, oozing sexual references

She died in 1980 at 87, having outlived the era she mocked. "Mae West really pushed the boundaries," Croff said.

Icarus tackles her show in a change-of-pace season.

In previous years, Icarus won praise and awards for intense, intimate dramas. "We hadn't really focused on comedies," Croff said. "And we didn't have enough strong roles for women."

Then he spotted "Sex" and decided it would be a good show - and a good theme for the season. Sex is also a theme in the ancient Greek "Truculentus" (in February) and the modern Elaine May comedy "Adult Entertainment" (in May).

In the 1920s, West was a modestly successful playwright and vaudeville performer, big and buxom and brassy.

She faced rigid rules, Croff said. "They weren't allowed to show prostitutes in America. They could if it was set in another country."

West toyed with that in "Sex." Her central character, Margy Lamont (Sara Frank), is a Montreal prostitute; she mixes with rich people, then heads to Trinidad.

There's a breezy cynicism to Margy, her pimp (Daryl Thompson) and her friend (Laura Croff). "You see them as fairly sharp-tongued," Clegg said, "but underneath it are very human characters."

There's also a complication: Like others from this era, "Sex" has lots of characters. "It does tend to fill up the stage," Croff said.

That's a 12-by-16-foot stage, at one end of Creole Gallery, which seats 90-100 people. Clegg [a theater veteran who has taken over as Boars Head's education director] had to figure out how to squeeze an epic show into an intimate space.
"This show has 22 characters," he said. "I eliminated one, but you still hear him yelling offstage." Otherwise, actors switch places quickly. Except for the leads, most people fill two or three roles. It's a brash undertaking. No one said it would be easy to perform "Sex" on an Old Town stage.

Mae West fan Kim Leone [from Clearwater, Florida] did a drawing of Mae. Kim said it's "on 11x14 vellum bristol board paper, done in graphite pencil." 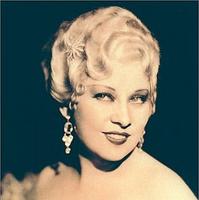 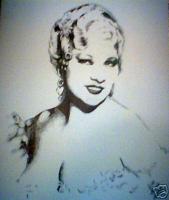 Speaking of Florida, in 1911 when 18-year-old Mae signed on with Frank Wallace [along with Jacobs and Jermon] to tour on the Columbia burlesque circuit in "A Florida Enchantment," they decided to get married.
http://maewest.blogspot.com/atom.xml
mae west
Posted by Mae West NYC at 8:40 PM No comments: 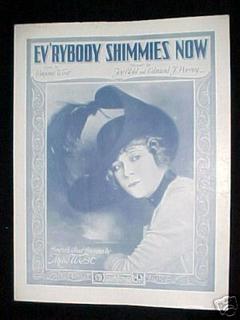 In Chicago, a 25-year-old Brooklyn actress studied the Black entertainers onstage who were doing an exciting new step. These dancers moved every part of their body -- except their feet. Mae West mastered "The Shimmy" and introduced it to audiences in New York City. To tie herself to the craze, Mae sang a song: "Ev'rybody Shimmies Now." Here is 1918 sheet music of this song with a picture of Mae on the cover, still a brunette during her vaudeville years.
Source:http://maewest.blogspot.com/atom.xml

Reporter Bobbie Johnson asked:
Where does the broadcasting revolution go from here? 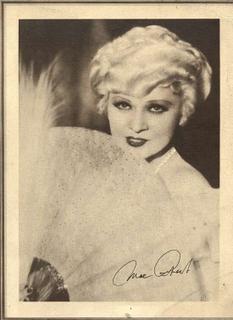 In the heyday of radio, the wireless was the centre of people's lives. The image of families gathered around their radio set is a familiar one -- listening to a broadcast was a group activity. . . . Now, just as people have been carrying their own music around with them, they're taking their own radio shows as well. When Mae West whispered, "Come up and see me sometime when I've got nothing but the radio on," she probably didn't imagine she would be wearing an iPod. . . .
excerpt from: Bobbie Johnson's article [13 October 2005]
Mail & Guardian http://www.mg.co.za/
- -
http://maewest.blogspot.com/atom.xml
mae west
Posted by Mae West NYC at 6:42 AM No comments:

_ MAE MAKES BROADWAY _
Plans are moving forward for Courting Mae West to open in a mid-size off-Broadway theater in March 2006. Based on the trials and tribulations that befell the actress during the 1920s -- when Mae was arrested and jailed for trying to bring two gay plays to Broadway -- the play features several characters modeled on real people: Beverly West, Texas Guinan, Jim Timony, Starr Faithfull, and others.
.
"Corsets keep my breasts like the righteous," quips Mae in the hilarious opening scene, "in pain but uplifted."
- - printed in amNew York, Weekend, October 7-9, 2005 [page 20] - -
http://maewest.blogspot.com/atom.xml
mae west
Posted by Mae West NYC at 2:21 AM No comments: 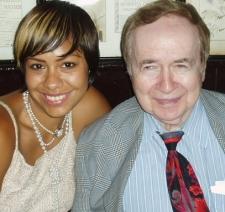 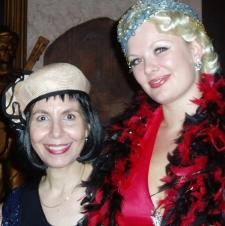 What Goes Down by Jules Peimer

LEGENDARY Joe Franklin, who had Mae West on his TV show many times, was guest of honor at the colorful Mae West Birthday Gala at Bill’s Gay Nineties. "Mae was a wonderful guest and a great comedienne," Franklin said. "Besides being the sexiest and highest salaried woman as a filmstar and nightclub performer during her heyday, she was also famous for her witticisms" - - such as:
* * "Keep a diary and someday it will keep you."
* * "I used to be Snow White but I drifted."
.
Marta Reiman, a member of the Workshop Theater, did an admirable job of portraying Mae West’s sexuality, mannerisms, and speech patterns in the opening scene from the play Courting Mae West. "Mae West had a great style, an attitude, and her ahead-of-the-times sexuality made her one-of-a-kind," said Reiman.
.
Playwright Linda Ann Loschiavo said that Mae West had been a failure for 27 years, accepted only by the burlesque community until Mae became a moviestar at age 40. "She was known for her outlandish sexuality and ability to ad lib," said Loschiavo. However, the one-liners in her play Courting Mae West are all original - - such as: "My hour glass figure makes each second count."
.
In the first scene, when a reporter tells Mae West he has to finish writing a biography of General Winfield Scott before his editor will assign him to interview actresses, Mae promises, "Listen, when you're writing about me, the sun won’t be the only thing going down on you."
* * PHOTO: Marta Reiman and Linda Ann Loschiavo
* * PHOTO: Talia Castro-Pozo and Joe Franklin
[All photos taken on August 17, 2005 at the Mae West Birthday Gala.]
Text and Photos by Jules Peimer
with Olympus Stylus 400 Digital Camera
www.15minutesmagazine.com
15 Minutes Magazine, Inc.
"In the future, everybody will be famous for 15 minutes." Andy Warhol
Copyright© 1999-2005
http://maewest.blogspot.com/atom.xml
mae west
Posted by Mae West NYC at 5:06 PM No comments: 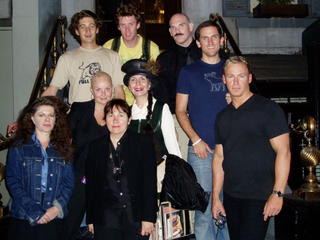 On October 2nd, 2005, several psychic ghost-hunters explored a haunted mansion on East 54th Street where vaudeville veterans -- including Mae West -- used to congregate when it was a speakeasy during the 1920s. TV legend Joe Franklin [not shown in this photo] spoke about interviewing Mae West to divinatrice Terry [Small Mediums at Large] Iacuzzo, British beauty Gail Porter, psychic Chris Fleming, actress Meryl Goodfader, and several other ghost-guides. Here's one of the group photographs taken after an awesome candlelit Mae West seance ended near midnight.
http://maewest.blogspot.com/atom.xml
mae west
Posted by Mae West NYC at 5:25 AM No comments: 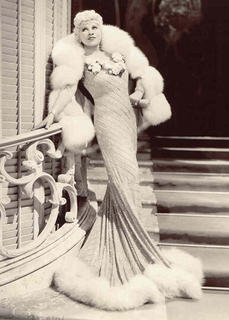