By way of her Italian accordionist husband, MAE WEST acquired a step-son, of sorts. She met the boy for the first time in 1938, when he was 10 years old. Formerly a vaudeville headliner, Guido Deiro was hit hard by the Great Depression, so Mae generously financed this child’s education and their relationship blossomed.
• • R. Mark Desjardins reviewed his memoir for The Mae West Blog during August 2019.
• • Guido Roberto Deiro’s title was: “Mae West and the Count — — Love and Loss on the Vaudeville Stage” [2019].
• • In this exclusive post, R. Mark Desjardins has composed Deiro’s obituary.
• • Guido Robert Deiro [18 February 1938 — 12 September 2019] • • 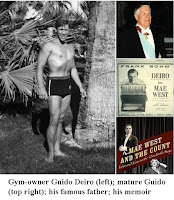 • • R. Mark Desjardins wrote: It is with great sadness I learnt of the passing of Guido Roberto Deiro, author of  "Mae West And the Count," which detailed the secret  marriage of his father to Mae West. It is not lost on me that his beloved wife Joan telephoned me with the news on November 22nd, the 39th anniversary of the passing of Mae West.
• • R. Mark Desjardins wrote: Guido was first introduced to Mae West by his father, Count Guido Deiro when he was 10 years old, in 1938. When Mae returned to Las Vegas in March of 1959, Guido had opened up a small gym: Globe Health Studios. It was the only gym in town at that time equipped with heavy enough free weights and barbells for Mae's troupe to maintain their strength training regimen.
• • R. Mark Desjardins wrote: George Eifferman, who eventually won the title of Mr. Universe 1962, got the musclemen in Mae's Sahara act to work out there during their four week booking.
• • R. Mark Desjardins wrote:  When Mae heard about this, she arranged for Guido, then 21 years old, to come and see her after her performance.
• • R. Mark Desjardins wrote: According to Guido, Mae West surveyed him from head to foot and stated, "You look a lot like your father, 'cept for his eyes."
• • R. Mark Desjardins wrote: Guido was able to educate the world about the great accomplishments of his father. With the publication of the story about his father and Mae West in the Spring of 2019, Guido Jr. had achieved his goal. Guido has inspired me to finish the last lap of my own Mae West manuscript. During our brief friendship that spanned five months, we spoke several times for hours at a time on the telephone, as well as shared numerous emails.
• • R. Mark Desjardins wrote: I will greatly miss his electrifying spirit and words of support.
• • Guido Roberto Deiro was born on Friday, 18 February 1938 in Reno, Nevada. Abruptly, he passed away on Thursday, 12 September 2019 in Las Vegas.
• • Photo of Guido, age 21, taken by body-builder George Eifferman. Photo-collage courtesy of Mr. Desjardins.
• • On Monday, 28 November 1932 • •
• • At the MPPDA board meeting on Monday, 28 November 1932, Adolph Zukor made promises to Will Hays that only "suitable material" would find its way into the script and the "Diamond Lil" title was already gone.
• • On Thursday, 28 November 2019 • •
• • Happy Thanksgiving today to all of our dear readers. • •
• • Overheard in Hollywood • •
• • Mae West was featured in the animated cartoon "The Coo-Coo Nut Grove" [1936]. The script took the audience on an amusing tour of a fashionable Hollywood night club.
• • In Her Own Words • •
• • Mae West said: "You've got to keep everything under control."
• • Mae West said: "That picture was a mistake from the word 'Shoot!'''
• • Quote, Unquote • •
• • Town and Country mentioned Mae West, who was shown reading the magazine in one of her films.
• • Town and Country’s editorial assistant Lucia Tonelli wrote: Bette Midler came dressed as legendary actress, singer, and playwright Mae West, wearing a striking feather-and-beaded pink ballgown with an equally extravagant matching headpiece.
• • Lucia Tonelli wrote: Michael Kors and husband Lance LePere judged the costume contest  . . .
• • Source: Town and Country; published on Friday, 1 November 2019
• • The evolution of 2 Mae West plays that keep her memory alive • •
• • A discussion with Mae West playwright LindaAnn LoSchiavo — —
• • http://lideamagazine.com/renaissance-woman-new-york-city-interview-lindaann-loschiavo/

• • The Mae West Blog celebrates its 15th anniversary • •
• • Thank you for reading, sending questions, and posting comments during these past fifteen years. Not long ago, we entertained 3,497 visitors. And we reached a milestone recently when we completed 4,300 blog posts. Wow!
• • By the Numbers • •
• • The Mae West Blog was started fifteen years ago in July 2004. You are reading the 4,355th blog post. Unlike many blogs, which draw upon reprinted content from a newspaper or a magazine and/ or summaries, links, or photos, the mainstay of this blog is its fresh material focused on the life and career of Mae West, herself an American original.