A cunning cartoon showed MAE WEST yanking G.B. Shaw's beard. If only the two controversial writers could chat during Shaw Fest, which had been presenting “Sex” in Canada until Sunday, 13 October 2019.
• • Buffalo Rising sent Grant Golden to review it. This is Part 7 of 7 segments, the finale.
• • SEX is a sensational drama by Mae West • •
• • I must fault the creative team • •
• • Grant Golden wrote: While I applaud the ShawFest for rediscovering and staging SEX, I must simultaneous fault the creative team for their very substantial, misguided efforts to make it more controversial, “arty.”
• • Grant Golden wrote: Did they trust the piece?  I suspect not. 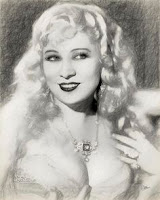 • • Grant Golden wrote: SEX deserved a nice, faithful rendering on a little proscenium stage, like the Royal George.  Sadly, that did not happen.
• • Grant Golden wrote: In its present incarnation, I can give it no more than two and a half buffaloes.
• • This stage review by Grant Golden has now concluded with part 7. We hope you enjoyed it as much as we do.
• • Source: Buffalo Rising; published on Tuesday, 6 August 2019.
• • On Wednesday, 5 November 1930 • •
• • "A prizefighter's tart" who enjoys black men as well as Caucasians, Babe Gordon, the frisky blonde teenage protagonist, was Mae's idea of an uptown temptress, footloose, fearless, and unfettered in Harlem.
• • The novel "Babe Gordon" by Mae West was published in New York City by The Macaulay Company on Wednesday, 5 November 1930.
• • Overheard in Hollywood • •
• • Morgan James sings the sexy showstopper "Turn Back, O Man" in "Godspell." Modeled after Mae West, her character aggressively flirts with the cast and audience.
• • In Her Own Words • •
• • Mae West said: "I won't drink Los Angeles water — — it's terrible.  I only drink bottled water."
• • Mae West said: "When you make the right demands, the studios are delighted."
• • Quote, Unquote • •
• • Canyon News mentioned Mae West.
• • Additional Bits and Pieces of Hollywood Stuff • •
• • Michael wrote: We immediately took to each other and she invited me to visit her the next day. She lived on Rossmore in Hollywood where only the very wealthy could afford; Mae resided in the penthouse of the building she owned [sic]. When I arrived at her place, I was met by Mark [sic], a young stud with muscles who was introduced as her partner-caretaker. He showed me into the living room. Everything there was white, rug, wall, piano, curtains, paintings, the only black thing in the place was ME.
• • Michael wrote: When Mae made her grand entrance, she was dressed completely in white, looking amazingly youthful and unbelievably stunning.
• • “Well, Michael,” she purred. “You made it.” . . .
• • Source: Canyon News; published on Tuesday, 15 October 2019
• • The evolution of 2 Mae West plays that keep her memory alive • •
• • A discussion with Mae West playwright LindaAnn LoSchiavo — —
• • http://lideamagazine.com/renaissance-woman-new-york-city-interview-lindaann-loschiavo/

• • The Mae West Blog celebrates its 15th anniversary • •
• • Thank you for reading, sending questions, and posting comments during these past fifteen years. Not long ago, we entertained 3,497 visitors. And we reached a milestone recently when we completed 4,300 blog posts. Wow!
• • By the Numbers • •
• • The Mae West Blog was started fifteen years ago in July 2004. You are reading the 4,338th blog post. Unlike many blogs, which draw upon reprinted content from a newspaper or a magazine and/ or summaries, links, or photos, the mainstay of this blog is its fresh material focused on the life and career of Mae West, herself an American original.