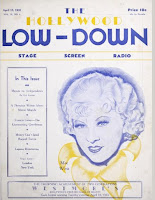 • • Mae West, whose likeness graces the cover of this issue of the Low-Down, is one of Paramount Pictures’ redeeming features. Mae, as we have repeatedly contended, is one of cinemaland’s stars who deserves all the complimentary adjectives which usually precedes her name.
• • Unlike many of the flicker favorites, Mae is not temperamental, high-hat, unlady-like or a publicity hound. While the characters she portrays on the silver screen have generated complaints from a certain type of critic, she is, in real life, a member of our better society.
• • It is with pleasure that we use Mae’s picture on our cover. We look forward with considerable anticipatory expectations for her next picture, “Goin’ to Town.”
• • Source: The Hollywood LOW-DOWN; published on Monday, 15 April 1935.
• • On Tuesday, 19 November 1996 • •
• • A CD by Mae West "I'm No Angel" was released on the British label Jasmine on Tuesday, 19 November 1996.
• • Overheard in Hollywood • •
• • The suasively undulating Mae West (sic) is back on the Paramount screen with a new and engagingly robustious.
• • In Her Own Words • •
• • Mae West said: "The Dior looks good on Dior!"
• • Mae West said: "I have never wanted to flaunt my romances in public."
• • Quote, Unquote • •
• • A biographer discussed Mae West.
• • These somber moments are described by her biographer Jill Watts:
• • ... At [Stanley] Musgrove's urging, Paul Novak organized a private service. On the afternoon of November 25, 1980, one hundred of Mae's family, friends, and acquaintance gathered at Forest Lawn's Old North Church to memorialize Mae West.  …
• • Source: Mae West: An Icon in Black and White. Author: Jill Watts. NY: Oxford University Press, 2001
• • The evolution of 2 Mae West plays that keep her memory alive • •
• • A discussion with Mae West playwright LindaAnn LoSchiavo — —
• • http://lideamagazine.com/renaissance-woman-new-york-city-interview-lindaann-loschiavo/

• • The Mae West Blog celebrates its 15th anniversary • •
• • Thank you for reading, sending questions, and posting comments during these past fifteen years. Not long ago, we entertained 3,497 visitors. And we reached a milestone recently when we completed 4,300 blog posts. Wow!
• • By the Numbers • •
• • The Mae West Blog was started fifteen years ago in July 2004. You are reading the 4,348th blog post. Unlike many blogs, which draw upon reprinted content from a newspaper or a magazine and/ or summaries, links, or photos, the mainstay of this blog is its fresh material focused on the life and career of Mae West, herself an American original.