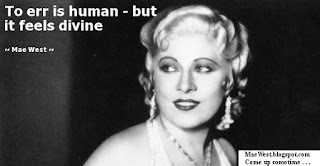 • • Art Beck wrote: Let’s revisit Mae West’s twist on Alexander Pope’s 18th-century English aphorism. Pope’s original (not an epigram per se, but extracted from a long didactic poem) is half of a “heroic couplet” — two rhyming, decasyllable pentameter lines:
• • Good-Nature and Good-Sense must ever join; / To err is human, to forgive divine.
• • Art Beck wrote: Each line comes to its own firm conclusion, and except for rhyme the second line could be read as its own “couplet,” with short lines of five syllables each:  To err is human, / to forgive divine.
• • Art Beck wrote: Mae West, I’d argue, seduces Pope’s theology with a sly syncopated lilt. When minimally altered and recast in a faux elegiac, with the omission of “but,” her divinity reigns in a somewhat earthier heaven: To err is human, /  but it feels divine.
• • Source: L.A. Review of Books; published on Friday, 4 October 2019.
• • On Monday, 6 November 1933 in Time • •
• • In October 1933, Time Magazine reported this: "The Central Association of Obstetricians and Gynecologists, meeting in Milwaukee last week, congratulated Mae West for popularizing plump female figures . . . ."
• • The edition of Time dated for Monday, 6 November 1933 printed readers' letters reacting to that group of physicians along with the publishing of Mae's measurements in the same article.
• • Overheard in Hollywood • •
• • Even Mae West has her worries. Since going to town with the nasty gangsters, she's taking no chances on getting herself spotted for a "ride," even around the Paramount lot.  Everyone working on her set was obliged to sign an identification card, and, if even a prop boy left the set for a split second, he had to sign his name again upon returning.
• • In Her Own Words • •
• • Mae West said: “She who laughs lasts.”
• • Mae West said: "My pianist — — I never could remember his name. I always introduced him as Harry Rikeman, or Reekman, or Rachman, so we decided to give him a name I couldn't forget: Richman. He's known everywhere now — — Harry Richman, King of the Vagabond Songsters."
• • Quote, Unquote • •
• • The Daily Variety mentioned Mae West.
• • “Mae West and Paris are a long run sensation” • •
• • Paris, Sept, 15. “She Done Him Wrong” (Paris) has entered Its seventh month at the Cinema Raspail here and is still going strong. Film is being shown in its original English version with French super-imposed titles.
• • Natives have fallen for 'Lady Lou,' as the film is advertised here, to a surprising extent and are patronizing this picture to a greater extent, than is generally true of an English language film.  …
• • Source: Variety; published on Tuesday, 26 September 1933
• • The evolution of 2 Mae West plays that keep her memory alive • •
• • A discussion with Mae West playwright LindaAnn LoSchiavo — —
• • http://lideamagazine.com/renaissance-woman-new-york-city-interview-lindaann-loschiavo/

• • The Mae West Blog celebrates its 15th anniversary • •
• • Thank you for reading, sending questions, and posting comments during these past fifteen years. Not long ago, we entertained 3,497 visitors. And we reached a milestone recently when we completed 4,300 blog posts. Wow!
• • By the Numbers • •
• • The Mae West Blog was started fifteen years ago in July 2004. You are reading the 4,339th blog post. Unlike many blogs, which draw upon reprinted content from a newspaper or a magazine and/ or summaries, links, or photos, the mainstay of this blog is its fresh material focused on the life and career of Mae West, herself an American original.