MAE WEST was booked several times at Hammerstein’s Victoria during 1911 and 1912. This is a little known story from one disappointing night in March 1913 when the show did not go on.
• • Lost 3 Acts Monday • •
• • Variety wrote: The Hammerstein theatre program found itself short three acts Monday. Two were filled in and the show allowed to run one short of the number billed for the week.
• • The acts failing to open were "The Squealer" (sketch), Mae West (single), and the Bison City Four.
• • "The Squealer" reported one member of the cast too ill to play, although it was said the new playlet had not been marked in readiness to open on Broadway. 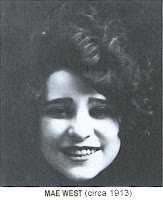 • • Miss West could not locate her trunk.
• • Offers of others on the program to supply her with a wardrobe for the matinee were refused, when the management said "through for the week."
• • One of the boys in the Bison City Four became suddenly ill and the act had to withdraw.
• • The turns replacing two of the departures were Block, Hurne and Thomas, Seymour Brown and Vialinski.
• • Source: Variety; published on Friday, 7 March 1913.
• • On Friday, 18 November 1995 • •
• • In the U.K., Virago (a British publisher specializing in women authors) reprinted the novelized version of "She Done Him Wrong" by Mae West. There was a book review in The Irish Times in the month of November — — on Friday, 18 November 1995.
• • Dublin-based critic Arminta Wallace called it "a hard-edged novella with a soft centre" and she wrote: "To put it frankly, Diamond Lil was a beautiful short course to hell." …
• • Overheard in Hollywood • •
• • Time Magazine stated: That Hollywood influences manners and morals is a fairly prevalent theory. Recent evidence: the Shirley Temple coiffure, Mae West's gusty wisecracks, Hollywood halo-hats, a break on the rising consumption of native U. S. whiskey. To relate this last-named fact to the cinema involved a statistical triumph of sorts.
• • In Her Own Words • •
• • Mae West said: “She who laughs lasts.”
• • Mae West said: "I have just seen that RAF flyers have a life-saving jacket they call a 'Mae West' because it bulges in all the right places. Well, I consider it a swell honor to have such great guys wrapped up in me, know what I mean?"
• • Quote, Unquote • •
• • A notable biographer discussed Mae West.
• • These somber moments are described by her biographer Jill Watts:
• • Soon [Mae West's] personal physician arrived. He announced that nothing more could be done. [Paul] Novak summoned a priest from the church just down the block, who gave Mae a blessing. Only a few minutes later, at 10:30 A.M., Mae West passed away [at the age of 87 years old].  . . .
• • Source: Mae West: An Icon in Black and White. Author: Jill Watts. NY: Oxford University Press, 2001
• • The evolution of 2 Mae West plays that keep her memory alive • •
• • A discussion with Mae West playwright LindaAnn LoSchiavo — —
• • http://lideamagazine.com/renaissance-woman-new-york-city-interview-lindaann-loschiavo/

• • The Mae West Blog celebrates its 15th anniversary • •
• • Thank you for reading, sending questions, and posting comments during these past fifteen years. Not long ago, we entertained 3,497 visitors. And we reached a milestone recently when we completed 4,300 blog posts. Wow!
• • By the Numbers • •
• • The Mae West Blog was started fifteen years ago in July 2004. You are reading the 4,347th blog post. Unlike many blogs, which draw upon reprinted content from a newspaper or a magazine and/ or summaries, links, or photos, the mainstay of this blog is its fresh material focused on the life and career of Mae West, herself an American original.