The Pacific Northwest decided to offer a new production of “Sex” written by MAE WEST and her collaborator Adeline M. Leitzbach in 1926. Let’s learn more. This is Part 4 of 7. Errors made by Wendy Leigh have been corrected.
• • ‘SEX’ appeals at WICA • •
• • A New York grand jury determined the play was obscene • •
• • Wendy Leigh wrote: When a grand jury determined the play was obscene, indecent, immoral and impure, West arrived in a limousine [sic] to serve her 10-day jail sentence – clad in silk underwear and strung with garlands of roses [sic].
• • Error correction: In 1927, The N.Y. Times and other dailies reported Mae was driven to the Women’s Workhouse in a prison van with other female inmates. Why don’t journalists and critics bother to be factual?
• • Wendy Leigh wrote: Those who think only West could inhabit the character of Margy LaMont in “SEX” haven’t seen Dixon strutting her stuff onstage at WICA. A year-round resident of Whidbey Island, now making her third appearance at WICA, Dixon brings an eclectic array of stage experience, ranging from cabaret to Kurt Weill’s “Beggar’s Opera” and the campy satirical musical “Forbidden Broadway.”
• • Taking on the role of Mae West • •  . . .
• • This stage review by Wendy Leigh will be continued on the next post.
• • Source: South Whidbey Record; published on Friday, 11 October 2019.
• • On Saturday, 12 November 1927 • •
• • Billboard commented on Saturday, 12 November 1927 about Mae West's play "The Wicked Age." Their remarks were exceedingly unkind.
• • Overheard in Hollywood • • 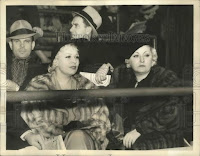 • • Behind the scenes, a tug-of-war was going on in Tinseltown. On one hand, Will Hays argued that Mae West would bring blatant indecency to the silver screen. On the other hand, studio executives sensed there was money to be made.
• • In Her Own Words • •
• • Mae West said: "How do I know so much about men? Baby, I went to night school."
• • Mae West said: "Don't you see how my life is? I gotta top myself in my pictures and I gotta watch myself in everything else. My private life has gotta be a model."
• • Quote, Unquote • •
• • A Canadian daily mentioned Mae West.
• • Catch another 'forbidden' classic at this New West reading series.
• • City Stage New West is winding up its Sips 'n’ Scripts series for the year with the reading of another once-banned production.
• • This year’s reading series is themed "Censored! Forbidden Classics of the Wicked Stage."
• • Lysistrata, the ribald Greek comedy, was presented in April, followed by a reading of Mae West’s "Sex" in June.  …
• • Source: New Westminster Record (Canada); published on Wednesday, 2 October 2019
• • The evolution of 2 Mae West plays that keep her memory alive • •
• • A discussion with Mae West playwright LindaAnn LoSchiavo — —
• • http://lideamagazine.com/renaissance-woman-new-york-city-interview-lindaann-loschiavo/

• • The Mae West Blog celebrates its 15th anniversary • •
• • Thank you for reading, sending questions, and posting comments during these past fifteen years. Not long ago, we entertained 3,497 visitors. And we reached a milestone recently when we completed 4,300 blog posts. Wow!
• • By the Numbers • •
• • The Mae West Blog was started fifteen years ago in July 2004. You are reading the 4,343rd blog post. Unlike many blogs, which draw upon reprinted content from a newspaper or a magazine and/ or summaries, links, or photos, the mainstay of this blog is its fresh material focused on the life and career of Mae West, herself an American original.