Many great minds have contemplated MAE WEST — — but great minds don’t think alike. Academic and author Chase Dimock has written an interesting article on Mae as a playwright. This is Part 21.
• • Why Don’t You Come Up Sometime and Queer Me? • •
• • Reclaiming Mae West as Author and Sexual Philosopher • •
• • The debate over homosexuality • •
• • Chase Dimock wrote: Although the scientific method proposes objectivity and neutrality in its observation and measurement, it is never fully divorced from the demands of society or the limitations of human perception.
• • The battle between nature and nurture • •
• • Chase Dimock wrote: In terms of the debate over homosexuality, we can think of this as the false dichotomy we have created in the battle between nature and nurture. Nature is presumed to be the organic state of existence and nurture its social state, but what we often fail to recognize is that nature is in of itself a social construction. What is natural is based on subjective opinions and affects on “the natural.”
• • Chase Dimock wrote: We only invoke the unnatural to deride practices that we dislike, otherwise the practices of which we are proud are the product of civilization’s defeat of the barbarity of nature. Thus, the question of homosexuality is not a tug of war between legal or medical discourses, but instead it is a product of their collusion, a product of how society uses medical discourse to legitimize their will and how medicine responds to social demands.
• • the sodomy laws • •  . . .
• • His article will be continued on the next post.
• • Source: As It Ought to Be
• • Chase Dimock, who teaches Literature and Composition at College of the Canyons, is Managing Editor of As It Ought to Be.
• • On Monday, 1 October 1928 • • 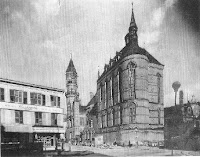 • • Mae West's gay play "Pleasure Man" had a $200,000 box office advance when it premiered at the Biltmore Theatre on Broadway on Monday, 1 October 1928. The police raided the show, however, and shut it down the same night.
• • Overheard in Hollywood • •
• • As Mae West once astutely pointed out: "If you keep a diary, one day it will keep you.”
• • In Her Own Words • •
• • Mae West said: "The nerve of a brass monkey."
• • Quote, Unquote • •
• • An article on diaries began with Mae West.
• • Jason Wordie wrote: The truth of American actress Mae West’s famous wisecrack that everyone should keep a diary, “because one day, honey, it’ll keep you …” ensures some diarists write with a mercenary posterity in clear view; British politician Alan Clark and heritage conservationist James Lees-Milne are classic examples.  …
• • Source: South China Post; published on Friday, 7 September 2018
• • The evolution of 2 Mae West plays that keep her memory alive • •
• • A discussion with Mae West playwright LindaAnn LoSchiavo — —
• • http://lideamagazine.com/renaissance-woman-new-york-city-interview-lindaann-loschiavo/

• • The Mae West Blog celebrates its 14th anniversary • •
• • Thank you for reading, sending questions, and posting comments during these past fourteen years. Not long ago, we entertained 3,497 visitors. And we reached a milestone recently when we completed 4,000 blog posts. Wow!
• • By the Numbers • •
• • The Mae West Blog was started fourteen years ago in July 2004. You are reading the 4054th blog post. Unlike many blogs, which draw upon reprinted content from a newspaper or a magazine and/ or summaries, links, or photos, the mainstay of this blog is its fresh material focused on the life and career of Mae West, herself an American original.