At the end of last year, British scholar Dr. Will Visconti wrote about MAE WEST. This is Part 5 of 7 excerpts.
• • Public indecency and the making of Mae West • •
• • bawdy songs • •
• • Dr. Will Visconti wrote: Eva Tanguay presented as wild and frenetic, rather than classically beautiful, just as Sophie Tucker’s ample figure and later her age meant that she had a degree of licence to sing bawdy songs that were undercut by her appearance.
• • Dr. Will Visconti wrote: During Mae West’s time as a theatre actress, there was also a fondness for what are commonly termed ‘blood and thunder’ melodramas of the late 19th century; many elements of the genre are certainly present in the plays that she wrote.
• • Mae West subverted many of the trends • •
• • Dr. Will Visconti wrote:Mae, however, subverted many of the trends of mainstream melodrama by making the central characters of her work the very ones who were usually punished and singled out for opprobrium, when they were represented at all. In “Sex,” Margy LaMont emerges victorious (with several men falling in love with her, amidst cases of mistaken identity and upsetting discoveries about characters along the way).
• • Mae West’s fame skyrocketed • • . . .
• • His article will be continued on the next post.
• • Source: Talking Humanities, S.A.S., University of London; published on Thursday, 7 December 2017.
• • On Sunday, 22 October 2006 • • 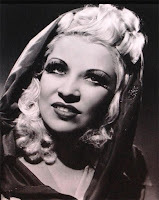 • • Angus McBean photographed Mae West, Audrey Hepburn, Marlene Dietrich, Katharine Hepburn, and numerous movie stars. His exhibition "Portraits" was held at the Porter Gallery, opening on 5 July 2006 and closing on Sunday, 22 October 2006.
• • Overheard in Hollywood • •
• • Mae West says that timid boys sometimes need to be suggested to or prompted.
• • In Her Own Words • •
• • Mae West said: "I won't drink Los Angeles water — — it's terrible.  I only drink bottled water."
• • Quote, Unquote • •
• • A spooky travel article mentioned Mae West.
• • The Most Haunted Homes, Hotels, and Lodges in America • •
• • Brookdale Lodge – Santa Cruz, California • •
• • Ashley Mateo and Sunny Montefiore wrote: Hollywood elite like Mae West, Marilyn Monroe, and Rita Hayworth once stayed at the Brookdale Lodge, which was converted into a hotel in 1900. Today’s creepy vibes can be attributed to the death of the original lodge owner’s niece . . .
• • Source: Men's Journal; published on Thursday, 11 October 2018
• • The evolution of 2 Mae West plays that keep her memory alive • •
• • A discussion with Mae West playwright LindaAnn LoSchiavo — —
• • http://lideamagazine.com/renaissance-woman-new-york-city-interview-lindaann-loschiavo/

• • The Mae West Blog celebrates its 14th anniversary • •
• • Thank you for reading, sending questions, and posting comments during these past fourteen years. Not long ago, we entertained 3,497 visitors. And we reached a milestone recently when we completed 4,000 blog posts. Wow!
• • By the Numbers • •
• • The Mae West Blog was started fourteen years ago in July 2004. You are reading the 4067th blog post. Unlike many blogs, which draw upon reprinted content from a newspaper or a magazine and/ or summaries, links, or photos, the mainstay of this blog is its fresh material focused on the life and career of Mae West, herself an American original.