On Wednesday, 25 October 1933, MAE WEST was making headlines in a NYC campus paper. Questionnaires filled out by 325 freshmen at Columbia University showed a staggering majority for Mae West as the one woman qualified to make a freshman happy today. Let’s enjoy this together.
• • Conservative Tendencies Held by Freshmen But Mae West Is Voted 'Ideal Woman' of 1937 • •
• • By J. J. Bryer and Maxwell J. Wihnyk
• • Yearling Poll Shows that the Ivy League Express a Preference for 3.2 Beer and Mae West • •
• • Freshmen Go Mae West, With Harlow Thrown in • •
• • The "ideal" type of woman for forty yearlings would be closely akin to Mae West. One student decided that only a woman "with Mae West's figure, Jean Harlow's hair, Greta Garbo's feet and Mary Brian's face" would satisfy him. A substantial number of the men queried were certain that their "ideal woman" could never exist.
• • Five feet, five inches, about 110 pounds and blonde seemed to be the most universal requirements. In defining their preferences, the first year men included the following terms of description:
• • Experienced, sophisticated, alluring, helpful, faithful, humorous, intelligent, charming, liberal, refined, simple, supple, fast, well-groomed, broadminded, good-natured, educated, sociable, reserved, decent, considerate, pure, rich, wistful, cultural, affectionate and unaffected. Some Freshmen desired a girl who is "socially conscious" and has been college bred. For others, a girl with "horse sense, a good figure, with the name of 'Skippy,' not a two-timer and a healthy constitution" was all that was desired.
• • One Freshman announced that he would be satisfied with a vivacious and personable girl who was "reasonably chaste."
• • "I want," another comment ran, "some voluptuous wench like Mae West." . . .
• • Source: Article in The Columbia Daily Spectator; published on Wednesday, 25 October 1933.
• • On Tuesday, 25 October 1932 • •. 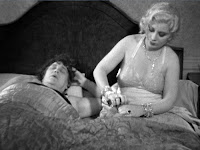 • • Variety reviewed "Night After Night," the motion picture debut of Mae West.  A display advertisement for the film was printed in Variety's issue dated for Tuesday, 25 October 1932.
• • Overheard in Hollywood • •
• • Mae West, the Broadway star, who made a picture called "She Done Him Wrong," is claimed to have caused a change in feminine fashions. Miss West is a well set up, curved blonde. Before she achieved success in her first starring picture, women had to be slim or they were out of fashion.
• • In Her Own Words • •
• • Mae West said: “When I sin, I'm in like Flynn."
• • Quote, Unquote • •
• • A daily newspaper mentioned Mae West.
• • Brooks Atkinson responded to Mae's performance "Diamond Lil" with this statement:  "A fine, full-bosomed woman with lots of glitter and gaudiness, Mae is an original unclassified phenomenon . . .
• • Source:  Stage Review in The N.Y. Times; published on Tuesday, 30 November 1948
• • The evolution of 2 Mae West plays that keep her memory alive • •
• • A discussion with Mae West playwright LindaAnn LoSchiavo — —
• • http://lideamagazine.com/renaissance-woman-new-york-city-interview-lindaann-loschiavo/

• • The Mae West Blog celebrates its 14th anniversary • •
• • Thank you for reading, sending questions, and posting comments during these past fourteen years. Not long ago, we entertained 3,497 visitors. And we reached a milestone recently when we completed 4,000 blog posts. Wow!
• • By the Numbers • •
• • The Mae West Blog was started fourteen years ago in July 2004. You are reading the 4070th blog post. Unlike many blogs, which draw upon reprinted content from a newspaper or a magazine and/ or summaries, links, or photos, the mainstay of this blog is its fresh material focused on the life and career of Mae West, herself an American original.