At the end of last year, British scholar Dr. Will Visconti was writing about MAE WEST. This is Part 3.
• • Public indecency and the making of Mae West • •
• • for tighter restrictions on material • •
• • Dr. Will Visconti wrote: Similarly, “The Drag” portrayed gay men and drag queens sympathetically, and treated the female impersonator Paradise, as one of the heroines of “Pleasure Man.” At the same time, however, groups like the New York Society for the Suppression of Vice were agitating for tighter restrictions on material shown in performances that they deemed to be indecent or immoral.
• • the story of same-sex desire between women • •
• • Dr. Will Visconti wrote: Édouard Bourdet’s melodrama “The Captive,” which tells the story of same-sex desire between women while never actually using the word ‘lesbian,’ was also raided at the same time as "The Drag." This formed part of the backdrop against which Mae West’s play’s publicity was set, and something on which she capitalised, when her later play “The Drag” was dubbed ‘a male Captive’ by the press.
• • Eva Tanguay — — an ‘eccentric comedienne’ • • …
• • His article will be continued on the next post.
• • Source: Talking Humanities, S.A.S., University of London; published on Thursday, 7 December 2017.
• • On Friday, 18 October 1918 • • 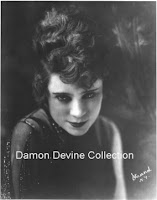 • • In Billboard's review of "Sometime" printed on 18 October 1918, they reserved several sentences filled with praise for Mae West.
• • Overheard in Hollywood • •
• • Mae West goes back to her favorite period, the nineties of last century, for her latest film, "Every Day's a Holiday," a Paramount picture.
• • In Her Own Words • •
• • Mae West said: "Sex is an emotion in motion."
• • Quote, Unquote • •
• • A travel site mentioned Mae West.
• • Dearly Departed Museum • •
• • A macabre tour of Hollywood’s deadly history. • •
• • If you’d like to see Mae West’s false teeth, Karen Carpenter’s sink, or the parts of the bed that Rock Hudson died in, the hotel room door where drag icon Divine died, and a tile from the Ambassador Hotel where Robert F. Kennedy was shot, then this morbid museum is a must-visit.  …
• • Source: Atlas Obscura; published on (undated)
• • The evolution of 2 Mae West plays that keep her memory alive • •
• • A discussion with Mae West playwright LindaAnn LoSchiavo — —
• • http://lideamagazine.com/renaissance-woman-new-york-city-interview-lindaann-loschiavo/

• • The Mae West Blog celebrates its 14th anniversary • •
• • Thank you for reading, sending questions, and posting comments during these past fourteen years. Not long ago, we entertained 3,497 visitors. And we reached a milestone recently when we completed 4,000 blog posts. Wow!
• • By the Numbers • •
• • The Mae West Blog was started fourteen years ago in July 2004. You are reading the 4065th blog post. Unlike many blogs, which draw upon reprinted content from a newspaper or a magazine and/ or summaries, links, or photos, the mainstay of this blog is its fresh material focused on the life and career of Mae West, herself an American original.