Many great minds have contemplated MAE WEST — — but great minds don’t think alike. Academic and author Chase Dimock has written an interesting article on Mae as a playwright. This is Part 25.
• • Why Don’t You Come Up Sometime and Queer Me? • •
• • Reclaiming Mae West as Author and Sexual Philosopher • •
• • this nameless vice • •
• • Chase Dimock wrote: In “The Drag,” the Doctor then attacks the legal response to the “homosexual problem” [continued]. He said, “But still you endeavor by law to force a man born with inverted sexual desires, born to make his way in the world with millions of human beings radically different than he is to become something his soul will not permit him to become.”
• • Chase Dimock wrote: The terms of the debate then shift into a binary between theory and practice, with the Judge complaining that the doctor’s medical theories may be true, but they do nothing to a solve a problem that he is forced by society to confront through the judicial system:
• • Chase Dimock wrote: “After all, what have you done? You medical men, you scientists, you social philosophers?
• • “Not one damn solitary thing!” • • . . .
• • His article will be continued on the next post.
• • Source: As It Ought to Be
• • Chase Dimock, who teaches Literature and Composition at College of the Canyons, is Managing Editor of As It Ought to Be.
• • On Saturday, 5 October 1918 • •
• • Mae West received top billing in the review of "Sometime" by The New York Times, which was first published on Saturday, 5 October 1918.
• • Overheard in Hollywood • • 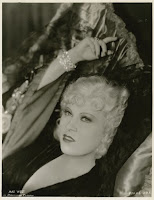 • • Ask Mae West a question, you get an answer. For instance, are those rocks real?
• • In Her Own Words • •
• • Mae West said: "Tired of all those jokes about my figure and my man talk? No, if people expect me to be the same off-stage — — why I call that flattery."
• • Quote, Unquote • •
• • A Florida daily mentioned Mae West.
• • “Carol Burnett, TCM salute Lucy, 'Funny Ladies'” • •
• • Hal Boedeker wrote: Carol Burnett will be joined in the hosting duties by actress and filmmaker Illeana Douglas, who recalls the wonderful movie spoofs on “The Carol Burnett Show.” Burnett remembers that Joan Crawford loved the send-up of “Mildred Pierce” and demonstrates how to imitate Mae West. ...
• • Source: Orlando Sentinel; published on Friday, 26 September 2018
• • The evolution of 2 Mae West plays that keep her memory alive • •
• • A discussion with Mae West playwright LindaAnn LoSchiavo — —
• • http://lideamagazine.com/renaissance-woman-new-york-city-interview-lindaann-loschiavo/

• • The Mae West Blog celebrates its 14th anniversary • •
• • Thank you for reading, sending questions, and posting comments during these past fourteen years. Not long ago, we entertained 3,497 visitors. And we reached a milestone recently when we completed 4,000 blog posts. Wow!
• • By the Numbers • •
• • The Mae West Blog was started fourteen years ago in July 2004. You are reading the 4058th blog post. Unlike many blogs, which draw upon reprinted content from a newspaper or a magazine and/ or summaries, links, or photos, the mainstay of this blog is its fresh material focused on the life and career of Mae West, herself an American original.