At the end of last year, British scholar Dr. Will Visconti was writing about MAE WEST. This is Part 7, the finale.
• • Public indecency and the making of Mae West • •
• • Kidding sex • •
• • Dr. Will Visconti wrote: Several of Mae West’s films drew on “Sex” and her other plays and novels, with “She Done Him Wrong” taking its inspiration from "Sex" and "Diamond Lil"; and the play "Frisco Kate" transforming into the film "Klondike Annie," all with Mae in the starring role. The character of Margy LaMont, and then Diamond Lil, became integral to the creation and marketing of the ‘Mae West Character’ — — what effectively became, or was, West’s public persona.
• • Dr. Will Visconti wrote: Watching Mae West on screen in films made within a decade of the premieres of her first plays, one gains a strong sense of how her onstage training, combined with her skill and drive as a writer, her observational skills and her comic timing were distilled into the creation of Mae West as her own most enduring character, whom she used as a mouthpiece to criticise hypocrisy and, in her own words, to ‘kid sex.’
• • Note: Dr. Will Visconti completed a joint PhD in French Studies and Italian Studies at the University of Sydney. He is currently a visiting fellow at the Centre for the Study of Cultural Memory at the Institute of Modern Language Research, part of the School of Advanced Study, University of London, and is a history and cultural studies lecturer at Central Saint Martins.
• • This seven-part article concludes here. We hope you enjoyed all the segments.
• • Source: Talking Humanities, S.A.S., University of London; published on Thursday, 7 December 2017.
• • On Tuesday, 24 October 1933 • • 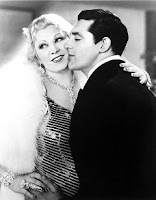 • • Variety couldn't stop printing articles about "I'm No Angel" starring Mae West.  "Mae West Opera Wows Newark — Cops House Record, $28,000, and Held Over" ran in Variety's issue dated for Tuesday, 24 October 1933.
• • Overheard in Hollywood • •
• • Will Hays argued that Mae West would bring blatant indecency to the silver screen. However, the studio executives sensed there was money to be made.
• • In Her Own Words • •
• • Mae West said:  "Of course, I was simply dressing in a way that would flatter my own rounded figure, and naturally I chose the gowns that would show me off to the best advantage. I guess some of the big fashion designers over in Paris, France figured that women would look a whole lot better in clothes which would reveal their natural figures."
• • Quote, Unquote • •
• • A Cape Town daily mentioned Mae West.
• • Ishani Chetty wrote: Patrons are encouraged to dress to the theme of Mae West or Al Capone, donning their most elegant and flapper-inspired attire.
• • Ishani Chetty wrote: The Art of Duplicity is open from Tuesdays to Saturdays from 6pm – midnight.
• • Ishani Chetty wrote: This location of the premier nightlife experience is kept secret from the general public, mums the word, hush-hush.  …
• • Source: Article in The Cape Town (So. Africa); published on Friday, 12 October 2018
• • The evolution of 2 Mae West plays that keep her memory alive • •
• • A discussion with Mae West playwright LindaAnn LoSchiavo — —
• • http://lideamagazine.com/renaissance-woman-new-york-city-interview-lindaann-loschiavo/

• • The Mae West Blog celebrates its 14th anniversary • •
• • Thank you for reading, sending questions, and posting comments during these past fourteen years. Not long ago, we entertained 3,497 visitors. And we reached a milestone recently when we completed 4,000 blog posts. Wow!
• • By the Numbers • •
• • The Mae West Blog was started fourteen years ago in July 2004. You are reading the 4069th blog post. Unlike many blogs, which draw upon reprinted content from a newspaper or a magazine and/ or summaries, links, or photos, the mainstay of this blog is its fresh material focused on the life and career of Mae West, herself an American original.