At the end of last year, British scholar Dr. Will Visconti was writing about MAE WEST. This is Part 6 of 7 excerpts. We are almost at the end.
• • Public indecency and the making of Mae West • •
• • Mae West’s fame skyrocketed • •
• • Dr. Will Visconti wrote: As a result of the court case and indecency charges around “Sex” and her successive plays, Mae West’s fame skyrocketed, making a succès de scandale of her work. She was given a $500 fine and a ten-day stay in Welfare Island Prison, which she turned to her advantage for both publicity and a means of garnering more material. She dined with the governor, visited other inmates, and was reputedly permitted to wear her own silk underwear rather than the coarser prison issue linen undergarments.
• • Dr. Will Visconti wrote: In her later film work, another controversial element to West’s performances was her insistence on casting black actors. This was despite the limitations imposed by Hollywood at the time that the only roles made available to black actors were as servants.
• • Kidding sex • •  . . .
• • His article will be concluded on the next post.
• • Source: Talking Humanities, S.A.S., University of London; published on Thursday, 7 December 2017.
• • On Friday, 23 October 1931 • • 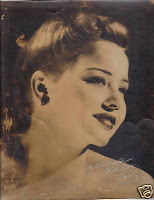 • • It was on Friday, 23 October 1931 that the New York City tabloid Evening Graphic reported on the very strange fan letters Mae West was receiving.
• • Overheard in Hollywood • •
• • The great Mae West not only starred in her films, she also wrote them. Motion picture censorship was introduced to bring her down.
• • In Her Own Words • •
• • Mae West said: "I soon saw that I was a prisoner of my publicity and success."
• • Quote, Unquote • •
• • A California daily quoted Mae West.
• • Mae West said: "The movies, in picturing erring women as doomed to suffer heartbreak and misery, have only been half right. Maybe years ago that situation prevailed. But not today. People are more broad-minded." ...
• • Source: Article in The L.A. Times; published on Sunday, 22 October 1933
• • The evolution of 2 Mae West plays that keep her memory alive • •
• • A discussion with Mae West playwright LindaAnn LoSchiavo — —
• • http://lideamagazine.com/renaissance-woman-new-york-city-interview-lindaann-loschiavo/

• • The Mae West Blog celebrates its 14th anniversary • •
• • Thank you for reading, sending questions, and posting comments during these past fourteen years. Not long ago, we entertained 3,497 visitors. And we reached a milestone recently when we completed 4,000 blog posts. Wow!
• • By the Numbers • •
• • The Mae West Blog was started fourteen years ago in July 2004. You are reading the 4068th blog post. Unlike many blogs, which draw upon reprinted content from a newspaper or a magazine and/ or summaries, links, or photos, the mainstay of this blog is its fresh material focused on the life and career of Mae West, herself an American original.