On Thursday, 10 October 1935, MAE WEST was in a tense situation.
• • Mae West’s Latest Stunt Blows Up • •
• • By United Press —Hollywood, Oct. 10 — — The task of a dramatic hunt for an extortionist, who was alleged to have threatened Mae West film actress, was without a principal today. George Janios, the bus boy in a studio cafe, arrested when he fumbled with a dummy package planted in a vacant lot, was released.
• • Three other men. questioned by Blaney Matthews, chief investigator for Buron Fitts, district attorney, also were released.
• • Source: United Press coverage rpt by Healdsburg Tribune; published on Thursday, 10 October 1935.
• • On Sunday, 11 October 1936 • •
• • On Sunday, 11 October 1936, Los Angeles Times readers saw this intriguing news item: "Mae West's Driver Hunted." Provocative, eh?
• • Overheard in Hollywood • •
• • CBS-News announced the line-up: Stage-and-screen star Mae West and "Dragnet" star Jack Webb are visited by new host, Charles Collingwood.
• • Instead neither West nor Webb would appear on the broadcast with Collingwood.Tsk-tsk.
• • In Her Own Words • •
• • Mae West said: “First you gotta know your man and then go after him in the right way.”
• • Quote, Unquote • • 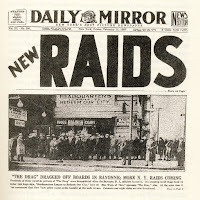 • • The New York Morning Telegraph mentioned Mae West.
• • According to Mae West, “There is one play which we never grow weary of seeing. That is the great show of life as it flows along. ‘The Drag’ is the second of what I am calling ‘comedy-dramas of life’." …
• • Image: The New York Daily Mirror's front page on Friday, 11 February 1927 when Bayonne police raided Mae's stage play "The Drag."   Quite a commotion in New Jersey.
• • Source: The New York Morning Telegraph; published on Tuesday, 1 February 1927
• • The evolution of 2 Mae West plays that keep her memory alive • •
• • A discussion with Mae West playwright LindaAnn LoSchiavo — —
• • http://lideamagazine.com/renaissance-woman-new-york-city-interview-lindaann-loschiavo/

• • The Mae West Blog celebrates its 14th anniversary • •
• • Thank you for reading, sending questions, and posting comments during these past fourteen years. Not long ago, we entertained 3,497 visitors. And we reached a milestone recently when we completed 4,000 blog posts. Wow!
• • By the Numbers • •
• • The Mae West Blog was started fourteen years ago in July 2004. You are reading the 4062nd blog post. Unlike many blogs, which draw upon reprinted content from a newspaper or a magazine and/ or summaries, links, or photos, the mainstay of this blog is its fresh material focused on the life and career of Mae West, herself an American original.