Many great minds have contemplated MAE WEST — — but great minds don’t think alike. Academic and author Chase Dimock has written an interesting article on Mae as a playwright. This is Part 23.
• • Why Don’t You Come Up Sometime and Queer Me? • •
• • Reclaiming Mae West as Author and Sexual Philosopher • •
• • a preconceived notion • •
• • Chase Dimock wrote: He asserts the subjective concept that one man’s norm is another man’s abnormality, but what he is unwilling to discard is the Aristotelian logic of the binary that nonetheless things can universally be placed into normal and abnormal categories. His conquest is to recover one’s right to normalcy while retaining the rhetoric of the abnormal instead of questioning the very human construct of normalcy, which in his scientific setting as a doctor, already implies a certain judgment on the observed and a preconceived notion of how to observed and categorize it.
• • Chase Dimock wrote: Shifting toward a question of the law, the Judge declares that “People like that should be herded together on some desert isle” and that “A man is what he makes himself — — “.
• • a question of the law • • . . .
• • His article will be continued on the next post.
• • Source: As It Ought to Be
• • Chase Dimock, who teaches Literature and Composition at College of the Canyons, is Managing Editor of As It Ought to Be.
• • On Wednesday, 3 October 1928 • • 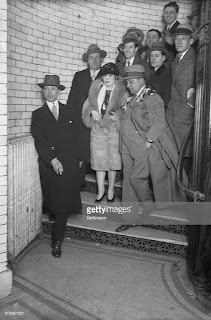 • • COURT STAYS POLICE on MAE WEST PLAY; Writ Bars Interference Until Friday and 'Pleasure Man' Is Performed to Full House. CASES OF 56 UP TOMORROW Cast Pleads Not Guilty and Bail Is Continued — — Walker Revealed as Instigator of Raid. Seeks Conference with Warren. Arrests May Still Be Made. Author Appears Concerned.
• • Coverage in The New York Times on Wednesday, 3 October 1928, page 33.
• • Overheard in Hollywood • •
• • Hollywood — Emanuel Cohen has definitely decided on "Go West Young Man" as the title of the new Mae West picture based on the stage play, "Personal Appearance," being filmed by Major Pictures for Paramount release.
• • In Her Own Words • •
• • Mae West said: "The box office business in the entire industry has dropped off 30 per cent in the past four months."
• • Quote, Unquote • •
• • A California paper mentioned Mae West.
• • But, to turn around Mae West's two-liner, when opera is bad, it can be naively bad, ...
• • Source: Item in The Stanford Daily; published on Friday, 3 October 1969
• • The evolution of 2 Mae West plays that keep her memory alive • •
• • A discussion with Mae West playwright LindaAnn LoSchiavo — —
• • http://lideamagazine.com/renaissance-woman-new-york-city-interview-lindaann-loschiavo/

• • The Mae West Blog celebrates its 14th anniversary • •
• • Thank you for reading, sending questions, and posting comments during these past fourteen years. Not long ago, we entertained 3,497 visitors. And we reached a milestone recently when we completed 4,000 blog posts. Wow!
• • By the Numbers • •
• • The Mae West Blog was started fourteen years ago in July 2004. You are reading the 4056th blog post. Unlike many blogs, which draw upon reprinted content from a newspaper or a magazine and/ or summaries, links, or photos, the mainstay of this blog is its fresh material focused on the life and career of Mae West, herself an American original.