Like MAE WEST, Diane Arbus was a native New Yorker. An Australian stage play, inspired by their Los Angeles meeting and photo session, was widely reviewed. To commemorate Arbus’s untimely death, age 48, in the month of July, let’s ponder some of those critiques.
• • Let’s hear from an Australian drama critic now. This is Part 3 of 4 excerpts.
• • “Meeting of two worlds of women” • •
• • “Arbus and West” by Stephen Sewell — — reviewed by Chris Boyd • •
• • Mae West as “America’s wet dream” • •
• • Chris Boyd wrote: In the blue, there’s Diane Arbus, fiercely independent in a professional, enigmatic and boyish way.
• • Chris Boyd wrote: In 1964, the It-girl photographer is a separated 41-year-old mother of two with a twin-lens reflex and a reputation for disarming strangers.
• • Chris Boyd wrote: Like so many of Sewell’s characters before her, Diane Arbus doesn’t know how to live. And her existential doubt is a dangerous contagion.
• • Chris Boyd wrote: Sarah Goodes’s production is sophisticated, thoughtful and convincing. Dressed in light-sucking plain black, Diana Glenn (Arbus) is like anti-matter, a walking blind spot in Mae West’s plush white world. Practical. Literal. Lethal. “Looking for the mythic in the everyday.”
• • Melita Jurisic enacts Mae West like a ventriloquist • • . . .
• • Chris Boyd’s stage review will be concluded on the next post with Part 4.
• • Source: The Australian; published on Monday, 4 March 2019.
• • On Monday, 15 July 1974 • •
• • Edward Field's poem “Mae West” was published on page 30 in The New Yorker's issue dated for the week of 15 July 1974.
• • July 2004: Mae West Blog launches • • 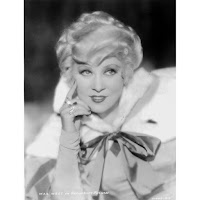 • • What are we up to, writing about the Brooklyn-born bombshell for fifteen years now?
• • We’re here to keep Mae mavens up to date, correct errors, celebrate each revival of a play she wrote, post the latest Westian stage and book reviews. And answer our fan mail!
• • The light’s still on. Come up and see Mae every day.
• • Overheard in Hollywood • •
• • Miss West is scheduled to give a deposition in the office of Frank Wallace's attorney. Previously Miss West, on advice of counsel, refused to vouchsafe any information save her name and address in depositions. She faced a contempt of court citation.
• • In Her Own Words • •
• • Mae West said: "You can never say that I refused to meet somebody half way.”
• • Quote, Unquote • •
• • A Canadian magazine mentioned Mae West.
• • James Gavin wrote: Elizabeth Taylor was descending into campy self-parody – as in her 1973 TV movie with Burton, Divorce His – Divorce Hers – and into one of her most notorious phases of overweight. En route to Studio 54 she was snapped in a baby-blue tent-dress, patting her hair like Mae West as she exited a car.  …
• • Source: FQ (Fashion Quarterly) Canada; published in the issue dated Fall 2006
• • The evolution of 2 Mae West plays that keep her memory alive • •
• • A discussion with Mae West playwright LindaAnn LoSchiavo — —
• • http://lideamagazine.com/renaissance-woman-new-york-city-interview-lindaann-loschiavo/

• • The Mae West Blog celebrates its 15th anniversary • •
• • Thank you for reading, sending questions, and posting comments during these past fifteen years. Not long ago, we entertained 3,497 visitors. And we reached a milestone recently when we completed 4,200 blog posts. Wow!
• • By the Numbers • •
• • The Mae West Blog was started fifteen years ago in July 2004. You are reading the 4256th blog post. Unlike many blogs, which draw upon reprinted content from a newspaper or a magazine and/ or summaries, links, or photos, the mainstay of this blog is its fresh material focused on the life and career of Mae West, herself an American original.