MAE WEST wrote “The Drag” and was proud to put “seventeen fairies on stage.” Banned in her era, the play has been making the rounds anew. This is Part 4 of 4 parts.
• • “The Drag” by Mae West in D.C. on Friday, 7 June 2019 • •
• • Mae West's work challenges the silencing of gay voices • •
• • Sarah Hookey wrote: Mae West's work challenges the silencing of gay voices on the stage in her decidedly audacious, flamboyant style-complete with rhinestones, sequins and lots of sass.
• • Sarah Hookey wrote: Coming to light recently with last year's publication of Three Plays (Sex / The Drag / The Pleasure Man) by Mae West, the National Theatre of London staged a reading of the play on July 10, 2017. Shakespeare Theatre Company is excited to share this rediscovered gem of LGBTQ+ drama.
• • Sarah Hookey wrote: After the reading, guests are invited to stay for a talkback with Washington, D.C. activists, performers and scholars.
• • “The Drag” by Mae West in D.C. has now concluded with Part 4. Did you enjoy it? We did.
• • Source: Broadway World; published on Tuesday, 21 May 2019.
• • On Saturday, 1 July 1933 • •
• • A Mickey Mouse cartoon, "Mickey's Gala Premiere," was released on Saturday, 1 July 1933. Mae West is one of the celebrities who makes an appearance.
• • July 2004: Mae West Blog launches • • 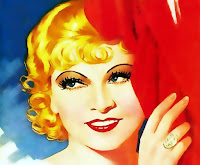 • • What are we up to, writing about the Brooklyn-born bombshell for fifteen years now?
• • We’re here to keep Mae mavens up to date, correct errors, celebrate each revival of a play she wrote, post the latest Westian stage and book reviews. And answer our fan mail!
• • The light’s still on. Come up and see Mae every day.
• • Overheard in Hollywood • •
• • Everyone in film-land, it seems, either loves or hates Mae West.
• • In Her Own Words • •
• • Mae West said:  "Everything I do and say is based on rhythm."
• • Quote, Unquote • •
• • People Magazine mentioned Mae West.
• • Sarah Wynter — — In 2002 the 24 star wore a 100-carat topaz cuff surrounded by multicolored sapphires once owned by Mae West. “I didn’t know she was going to wear it in her hair,” says Neil Lane, who purchased the bracelet, as well as the matching earrings and ring Wynter wore, at Mae West’s estate sale. “It was very ingenious.” The items remain a part of Neil Lane’s personal collection. …
• • Source: People Magazine; published on Monday, 15 March 2004
• • The evolution of 2 Mae West plays that keep her memory alive • •
• • A discussion with Mae West playwright LindaAnn LoSchiavo — —
• • http://lideamagazine.com/renaissance-woman-new-york-city-interview-lindaann-loschiavo/

• • The Mae West Blog celebrates its 15th anniversary • •
• • Thank you for reading, sending questions, and posting comments during these past fifteen years. Not long ago, we entertained 3,497 visitors. And we reached a milestone recently when we completed 4,200 blog posts. Wow!
• • By the Numbers • •
• • The Mae West Blog was started fifteen years ago in July 2004. You are reading the 4246th blog post. Unlike many blogs, which draw upon reprinted content from a newspaper or a magazine and/ or summaries, links, or photos, the mainstay of this blog is its fresh material focused on the life and career of Mae West, herself an American original.