Like MAE WEST, Diane Arbus was a native New Yorker. An Australian stage play, inspired by their Los Angeles meeting and photo session, was widely reviewed. To commemorate Arbus’s untimely death, age 48, in the month of July, let’s ponder some of those critiques.
• • Let’s hear from an Australian drama critic now. This is Part 2 of 4 excerpts.
• • “Meeting of two worlds of women” • •
• • “Arbus and West” by Stephen Sewell — — reviewed by Chris Boyd • •
• • Mae West: championing or exploiting? • •
• • Chris Boyd wrote: Argument still rages as to whether Mae West was championing or exploiting her “sisters,” and if she really was sex, queer and black-positive or if she just knew how to push the buttons of buttoned-up Yankees.
• • Chris Boyd wrote: Thirty years after George Davis’s fanboy love-letter was published in Vanity Fair, West met another champion—exploiter of freaks and misfits: photographer Diane Arbus.
• • Chris Boyd wrote: Stephen Sewell’s play about the encounter is as subtle, refined and weirdly engrossing as anything he’s written. On one level, it’s a jousting stand-off between radically different kinds of air-gapped and generation-gapped women. In the red corner, there’s “America’s wet dream,” available to all comers but possessed by none: a 71-year-old living in a theme park of her own making.
• • Mae West as “America’s wet dream” • •  . . .
• • Chris Boyd’s stage review will be continued on the next post.
• • Source: The Australian; published on Monday, 4 March 2019.
• • On Thursday, 12 July 1934 in Hollywood • •
• • Hollywood Reporter printed an article about Mae West's upcoming project. "New Orleans Kicks on Mae West's 'Belle'" was printed on the front page in the issue dated for Thursday, 12 July 1934.
• • July 2004: Mae West Blog launches • • 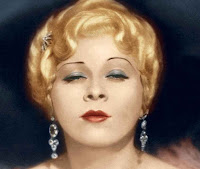 • • What are we up to, writing about the Brooklyn-born bombshell for fifteen years now?
• • We’re here to keep Mae mavens up to date, correct errors, celebrate each revival of a play she wrote, post the latest Westian stage and book reviews. And answer our fan mail!
• • The light’s still on. Come up and see Mae every day.
• • Overheard in Hollywood • •
• • Australia and Latvia banned Mae West's motion picture “She Done Him Wrong.”
• • In Her Own Words • •
• • Mae West said: "Men, make every woman love you — — but don't love every woman. Pet them, like a tabby cat. They love it."
• • Quote, Unquote • •
• • Vanity Fair mentioned Mae West.
• • George Davis wrote about West in Vanity Fair [“The Decline of the West”] writing this: “ I can pay you no greater tribute, dear lady, than to say that [my love for you] has healed the wound in my heart caused by the death of the one and only Bert Savoy. I love you, Miss West, because YOU are the greatest female impersonator of all time.”  . . .
• • Source: Vanity Fair;  published in the issue dated May 1934
• • The evolution of 2 Mae West plays that keep her memory alive • •
• • A discussion with Mae West playwright LindaAnn LoSchiavo — —
• • http://lideamagazine.com/renaissance-woman-new-york-city-interview-lindaann-loschiavo/

• • The Mae West Blog celebrates its 15th anniversary • •
• • Thank you for reading, sending questions, and posting comments during these past fifteen years. Not long ago, we entertained 3,497 visitors. And we reached a milestone recently when we completed 4,200 blog posts. Wow!
• • By the Numbers • •
• • The Mae West Blog was started fifteen years ago in July 2004. You are reading the 4255th blog post. Unlike many blogs, which draw upon reprinted content from a newspaper or a magazine and/ or summaries, links, or photos, the mainstay of this blog is its fresh material focused on the life and career of Mae West, herself an American original.