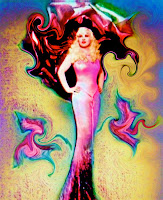 • • What are we up to, writing about the Brooklyn-born bombshell for fifteen years now?
• • We’re here to keep Mae mavens up to date, correct errors, celebrate each revival of a play she wrote, post the latest Westian stage and book reviews. And answer our fan mail!
• • The light’s still on. Come up and see Mae every day.
• • Overheard in Hollywood • •
• • Mae West and Jim Timony are apparently as devoted as when Mae first tackled Hollywood.
• • In Her Own Words • •
• • Mae West said: “Why, the most absurd thing I ever heard of are these Hollywood divorces with the two principals announcing all over the newspapers how much they still love each other though they don’t want to keep on living together. Of course, they don’t love each other – that’s too silly for words. One or both of them has lost sex appeal. It all comes down to that.”
• • Quote, Unquote • •
• • An article about "Sextette" (the 1961 stage play) mentioned Mae West.
• • After her leading man Alan Marshal died in Chicago, Mae tried to replace him with Tom Conway, who was no longer working regularly. He auditioned but then declined this role.
• • "Sextette" moved to Detroit first, had an engagement in Ohio, then was staged in Miami Beach. After that Mae closed it.
• • Always unkind, Variety wrote: "The Edgewater was unable to sell a single theatre party for the show, and it goes down as the silo's biggest box office flop to date."    ...
• • Source: Article: "Sextette" written by Variety; published on Wednesday, 19 July 1961
• • The evolution of 2 Mae West plays that keep her memory alive • •
• • A discussion with Mae West playwright LindaAnn LoSchiavo — —
• • http://lideamagazine.com/renaissance-woman-new-york-city-interview-lindaann-loschiavo/

• • The Mae West Blog celebrates its 15th anniversary • •
• • Thank you for reading, sending questions, and posting comments during these past fifteen years. Not long ago, we entertained 3,497 visitors. And we reached a milestone recently when we completed 4,200 blog posts. Wow!
• • By the Numbers • •
• • The Mae West Blog was started fifteen years ago in July 2004. You are reading the 4260th blog post. Unlike many blogs, which draw upon reprinted content from a newspaper or a magazine and/ or summaries, links, or photos, the mainstay of this blog is its fresh material focused on the life and career of Mae West, herself an American original.