Like MAE WEST, Diane Arbus was a native New Yorker. An Australian stage play, inspired by their Los Angeles meeting and photo session, was widely reviewed. To commemorate Arbus’s untimely death, age 48, in the month of July, let’s ponder some of those critiques.
• • Let’s hear from another Australian drama critic now. This is Part 1 of 10 segments.
• • In Stephen Sewell’s charming “Arbus and West,” feminism boils to the surface • •
• • Sandra D’Urso wrote:  In the world premiere production of “Arbus and West,” playwright Stephen Sewell appears to be straying into unchartered territory. He is renowned for being a hard-hitting political writer, whose epic plays are almost always described as “dark.”
• • Sandra D’Urso wrote:  Here Sewell reimagines the real-life encounter between Hollywood icon Mae West and avant-garde photographer Diane Arbus. Key moments in the lives of these two fascinating 20th century artists provide the seductive scaffolding for the play.
• • Sandra D’Urso wrote:  It is far from documentary-like, however. The dialogue is charming and comedic, while the theme of women’s eviscerated position in society slowly boils and erupts to the surface.
• • The biographies are compelling fare • • . . .
• • Sandra D’Urso’s review will be continued on the next post.
• • Review: “Arbus and West,” Melbourne Theatre Company
• • Source: The Conversation; published on Wednesday, 6 March 2019.
• • On Saturday, 23 July 1938 in Bristol, England • •
• • "At the Little Theatre — — A Mae West film" announced the Western Daily Press (Bristol, England) on Saturday, 23 July 1938.
• • July 2004: Mae West Blog launches • • 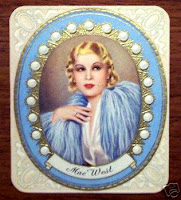 • • What are we up to, writing about the Brooklyn-born bombshell for fifteen years now?
• • We’re here to keep Mae mavens up to date, correct errors, celebrate each revival of a play she wrote, post the latest Westian stage and book reviews. And answer our fan mail!
• • The light’s still on. Come up and see Mae every day.
• • Overheard in Hollywood • •
• • The "Sex" painting commissioned by Mae West was painted by the artist Florence A. Kosell.
• • In Her Own Words • •
• • Mae West said: “Well, this artist, Florence Kosell was her name, she was here one day and she walked through the bedroom and I was lying there on my bed, so she said, ‘I must paint you like that.’ She wanted it full face at first, but I thought it was kind of brazen, so I say how long will it take to do? She tells me and it’s a long time. So I say, well how long will it take to do it in profile? She says half the time, so that’s how we did it.”
• • Quote, Unquote • •
• • A French paper mentioned Mae West and Gladys Lewis Bush [1889 — 1954].
• • Theadora Brack wrote: I find myself wondering: what would my own monument look like? How will they style me when I leave the rodeo? In a trench coat or — — heaven forbid — — my favourite puffy parka? Then it strikes me: why wait? After all, Mae West didn’t wait after successfully making the jump from the stage to the talkies.
• • Theadora Brack wrote: “They’re saying I’m through but I’m not. I can always keep on giving them something different,” Mae told the press. “A star keeps going!”
• • Theadora Brack wrote: Then, the on-the-go Mae West visited Paris. Well, almost. Instead, the savvy boss diva commissioned artist Gladys Lewis Bush to sculpt a mini-Mae statue and sent it in her place. “She was stretched out on the operating-table of my work-room, and measured and probed with care and curiosity,” designer Elsa Schiaparelli wrote in her tell-all autobiography.  . . .
• • Source: France Today; published on Monday, 8 July 2019
• • The evolution of 2 Mae West plays that keep her memory alive • •
• • A discussion with Mae West playwright LindaAnn LoSchiavo — —
• • http://lideamagazine.com/renaissance-woman-new-york-city-interview-lindaann-loschiavo/

• • The Mae West Blog celebrates its 15th anniversary • •
• • Thank you for reading, sending questions, and posting comments during these past fifteen years. Not long ago, we entertained 3,497 visitors. And we reached a milestone recently when we completed 4,200 blog posts. Wow!
• • By the Numbers • •
• • The Mae West Blog was started fifteen years ago in July 2004. You are reading the 4262nd blog post. Unlike many blogs, which draw upon reprinted content from a newspaper or a magazine and/ or summaries, links, or photos, the mainstay of this blog is its fresh material focused on the life and career of Mae West, herself an American original.