Like MAE WEST, Diane Arbus was a native New Yorker. An Australian stage play, inspired by their Los Angeles meeting and photo session, was widely reviewed. To commemorate Arbus’s untimely death, age 48, in the month of July, let’s ponder some of those critiques.
• • Let’s hear from another Australian drama critic now. This is Part 3 of of 10 segments.
• • In Stephen Sewell’s charming “Arbus and West,” feminism boils to the surface • •
• • Each woman has a compelling life story • •
• • Sandra D’Urso wrote: Arbus and West each have compelling biographies.
• • Sandra D’Urso wrote: Arbus and West’s encounter is a mere snapshot in time, taking place over the course of an afternoon. The production transforms this small moment into a sweeping panorama, as though the event of their meeting transcended historical time altogether, delivering a dreamy interpretation of the human condition, and the position of women within it.
• • Sandra D’Urso wrote: The drama takes place in West’s apartment, a monument to camp style, with its chandelier, white upholstered furniture, and multi-storeyed window bathing the space in an almost transcendental light.
• • Sewell’s scenes unfold as duologues • •  . . .
• • Sandra D’Urso’s review will be continued on the next post.
• • Source: The Conversation; published on Wednesday, 6 March 2019.
• • On Thursday, 25 July 1946 • •
• • The famous photo of Mae West with her hand on bodybuilder John Farbotnik's flexed upper arm was taken on Thursday, 25 July 1946 after the muscleman won the Mr. Chicago title.
• • July 2004: Mae West Blog launches • • 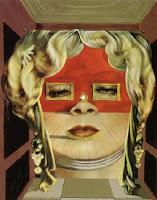 • • What are we up to, writing about the Brooklyn-born bombshell for fifteen years now?
• • We’re here to keep Mae mavens up to date, correct errors, celebrate each revival of a play she wrote, post the latest Westian stage and book reviews. And answer our fan mail!
• • The light’s still on. Come up and see Mae every day.
• • Overheard in Hollywood • •
• • Ginger Rogers' mother spent years and years building up her own little theatre in Hollywood. She turned it over to Mae West's manager, Jim Timony, only to have the police padlock it after raiding his production of Miss West's play [sic].
• • In Her Own Words • •
• • Mae West said: “My fans! They holler in the streets and ask me for my autograph when I go out in my car.”
• • Quote, Unquote • •
• • Motion Picture Herald mentioned Mae West.
• • Goin' to Town: Mae West— They like Mae West here so we did business. If they don't like Mae, there is nothing left. — Mr. Harland Rankin, Plaza Theatre, Tilbury, Ontario, Canada. General patronage.
• • Source: Motion Picture Herald; published on Saturday, 18 January 1936
• • The evolution of 2 Mae West plays that keep her memory alive • •
• • A discussion with Mae West playwright LindaAnn LoSchiavo — —
• • http://lideamagazine.com/renaissance-woman-new-york-city-interview-lindaann-loschiavo/

• • The Mae West Blog celebrates its 15th anniversary • •
• • Thank you for reading, sending questions, and posting comments during these past fifteen years. Not long ago, we entertained 3,497 visitors. And we reached a milestone recently when we completed 4,200 blog posts. Wow!
• • By the Numbers • •
• • The Mae West Blog was started fifteen years ago in July 2004. You are reading the 4264th blog post. Unlike many blogs, which draw upon reprinted content from a newspaper or a magazine and/ or summaries, links, or photos, the mainstay of this blog is its fresh material focused on the life and career of Mae West, herself an American original.