Like MAE WEST, Diane Arbus was a native New Yorker. A stage play, inspired by their Los Angeles meeting and photo session, was widely reviewed. To commemorate Arbus’s untimely death, age 48, in the month of July, let’s ponder some of those critiques.
• • Let’s hear from The N.Y. Times critic first. This is Part 3 of 7 excerpts.
• • Theater Review — — “When Mae West Met Diane Arbus” • •
• • Mae’s quotes and bon mots are used • •
• • Laura Cappelle wrote: Some of her more famous quotes — such as “Between two evils, I always pick the one I never tried before” — are expertly woven into the text alongside new witticisms. Of her eccentric all-white interior, reinvented by the set designer Renée Mulder, West memorably tells Arbus: “I just like seeing where I’ve been dirty.”
• • Laura Cappelle wrote: Melita Jurisic, whose credits include the movie “Mad Max: Fury Road,” relishes every line as Mae West. Sarah Goodes’s production takes pains to make her look as visually close to Arbus’s photos as possible, with a very similar white négligé and blonde wig.
• • crude verve • •  . . .
• • Laura Cappelle’s review will be continued on the next post.
• • Source: N.Y. Times, stage review; published on Thursday, 21 March 2019.
• • On Thursday, 4 July 2019 • • 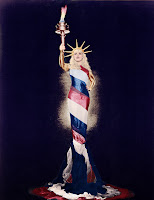 • • The Mae West Blog wishes all our visitors a hot and happy Fourth of July.
• • On Saturday, 4 July 1970 • •
• • While the motion picture "Myra Breckinridge" was not a hit, the media exposure engendered a "Mae West revival," explained The New York Post on Saturday, 4 July 1970.
• • July 2004: Mae West Blog launches • •
• • What are we up to, writing about the Brooklyn-born bombshell for fifteen years now?
• • We’re here to keep Mae mavens up to date, correct errors, celebrate each revival of a play she wrote, post the latest Westian stage and book reviews. And answer our fan mail!
• • The light’s still on. Come up and see Mae every day.
• • Overheard in Hollywood • •
• • In August 1933, Screen Play began running “The Only True Story of Garbo’s Private Life” by her former private secretary, Sven Hugo Borg.  An “imaginative” meeting between Greta Garbo and Mae West generated commentary in a number of fan magazines early in 1933.
• • In Her Own Words • •
• • Mae West said: "Jazz suited me — — I liked the beat and emotions."
• • Quote, Unquote • •
• • A book on de-toxing mentioned Mae West.
• • Victoria Boutenko wrote: Keep a diary, and someday it'll keep you. — Mae West
• • Victoria Boutenko wrote: I encourage you to keep a diary throughout your green smoothie retreat.
• • Source: “Green Smoothie Retreat: A 7-Day Plan to Detox” [North Atlantic Books];  published in 2015
• • The evolution of 2 Mae West plays that keep her memory alive • •
• • A discussion with Mae West playwright LindaAnn LoSchiavo — —
• • http://lideamagazine.com/renaissance-woman-new-york-city-interview-lindaann-loschiavo/

• • The Mae West Blog celebrates its 15th anniversary • •
• • Thank you for reading, sending questions, and posting comments during these past fifteen years. Not long ago, we entertained 3,497 visitors. And we reached a milestone recently when we completed 4,200 blog posts. Wow!
• • By the Numbers • •
• • The Mae West Blog was started fifteen years ago in July 2004. You are reading the 4249th blog post. Unlike many blogs, which draw upon reprinted content from a newspaper or a magazine and/ or summaries, links, or photos, the mainstay of this blog is its fresh material focused on the life and career of Mae West, herself an American original.