The Broadway hit “Personal Appearance” was customized to the talents of MAE WEST. Production began in high summer — — on Monday, 10 August 1936 — — and the project wrapped in September. Its release date was in mid-November, right before the holiday season began. This is Part 2 of 2.
• • "Go West Young Man" — — (Major Prod. / Paramount) • •
• • first romantic invasion • •
• • Tuning some hectic fun with action, Williams beats down his charge's first romantic invasion involving the all too willing politician, Lyle Talbot. Then the road party becomes stranded in a country hotel peopled by interesting characters and Mae sets her cap for a local automobile mechanic, played by Randolph Scott. She becomes a super-menace to the honest romance of Scott's local sweetheart, played by Margaret Perry, and William has to stage a faked kidnapping and call upon hordes of cops to prevent his star from making the unwilling but highly tempted Scott her victim and, to prevent similar recurrences, finally marries her.
• • Emanuel Cohen's production and Henry Hathaway's direction give the star plenty of opportunity for her particular type of performance, which is enhanced by the contributions of Isabel Jewell, Alice Brady, Elizabeth Patterson, and Etienne Girardot.
• • Production Code Seal No. 2,788. Running time, 80 minutes. "A."
• • Source: Motion Picture Daily’s Hollywood Preview; published on Wednesday, 4 November 1936.
• • On Sunday, 16 August 1964 • • 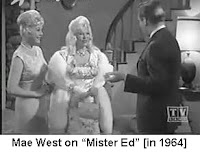 • • An article "Return Engagement" appeared in The New York Times on Sunday, 16 August 1964. Plans were then in the works for Mae to be featured on the TV sit-com "Mister Ed" for a second episode. Mae was to have played a saloon keeper. This TV project fizzled out, it seems.
• • Overheard in Hollywood • •
• • N.Y. Times film critic Andre Sennewald saw in Mae West a welcome relief from those “sulphurous sex-dramas” starring Greta Garbo and Marlene Dietrich.
• • In Her Own Words • •
• • Mae West said: “She who laughs lasts.”
• • Mae West said: "A quiet country estate would bore me. I'm a city gal and I like rackets — — and I don't mean what you think."
• • Quote, Unquote • •
• • The Daily Variety mentioned Mae West.
• • Hollywood, April 23, 1935. Mae West goes on the air with Louella Parsons for Campbell Soup on May 3. After turning down as high as $8,000 for a single commercial shot, the actress gets no cash, but is paid off in newspaper space, as have several other picture names.  . . .
• • Source: Variety; published on Wednesday, 24 April 1935
• • The evolution of 2 Mae West plays that keep her memory alive • •
• • A discussion with Mae West playwright LindaAnn LoSchiavo — —
• • http://lideamagazine.com/renaissance-woman-new-york-city-interview-lindaann-loschiavo/

• • The Mae West Blog celebrates its 15th anniversary • •
• • Thank you for reading, sending questions, and posting comments during these past fifteen years. Not long ago, we entertained 3,497 visitors. And we reached a milestone recently when we completed 4,200 blog posts. Wow!
• • By the Numbers • •
• • The Mae West Blog was started fifteen years ago in July 2004. You are reading the 4280th blog post. Unlike many blogs, which draw upon reprinted content from a newspaper or a magazine and/ or summaries, links, or photos, the mainstay of this blog is its fresh material focused on the life and career of Mae West, herself an American original.