When did MAE WEST discover false eyelashes? No matter. Even in this aspect, she decided she would triumph over the contract players.
• • Modern Screen wrote: The biggest battle of the season was the battle of the false eyelashes, staged by Mae West and Alice Brady during the making of “Go West Young Man."
• • Modern Screen wrote: When Mae appeared with long eye adornment. Alice showed up with longer ones. It went on days, but Miss W. won out by the simple procedure of cutting Miss Brady's part here and there. 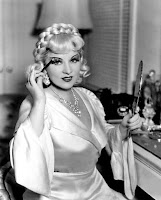 • • Modern Screen wrote: Both gals should have sent for Marlene Dietrich. who's a real authority on the false eyelash subject. Marlene took three dozen pairs of them with her on her recent trip abroad.
• • Source: Modern Screen; published in the issue dated for December 1936.
• • On Monday, 28 August 1939 in Life • •
• • Life Magazine's issue (dated 28 August 1939) included a half-page photo of Mae West.
• • Overheard in Hollywood • •
• • September 13, 1938 — — North Hollywood Press: Weekly newspaper that was a continuation of the Lankershim Press and the Lankershim Laconic. Included front-page editorials, a society page and classified ads. Stories in the 1930s focused on such local news as Mae West’s sister Beverly enlarging her home, residents entertaining their friends from Cheviot Hills, a cat biting a child, and even suicides.
• • In Her Own Words • •
• • Mae West said: "It just breaks my heart when the censors take out my best cracks."
• • Mae West said: "Men are my hobby. If I ever got married, I'd have to give it up.”
• • Quote, Unquote • •
• • Modern Screen mentioned Mae West.
• • Look at the names which twinkle in electric lights above the theatres. Fred Astaire, Ginger Rogers, W. C. Fields, Greta Garbo, Claudette Colbert, Jean Harlow Mae West, Myrna Loy, Janet Gaynor, Grace Moore, William Powell. A dozen others.
• • Not one of them is listed on the alumni records of any university. . . .
• • Jean Harlow ran away from a girls' school to be married and later, played extras in Hollywood.
• • Mae West sang her riotous, lusty songs in vaudeville theatres.
• • Myrna Loy taught dancing, posed for sculptors and played bit roles in Hollywood pictures....
• • Source: Modern Screen, 149 Madison Avenue, New York, NY; published in the issue dated for December 1936
• • The evolution of 2 Mae West plays that keep her memory alive • •
• • A discussion with Mae West playwright LindaAnn LoSchiavo — —
• • http://lideamagazine.com/renaissance-woman-new-york-city-interview-lindaann-loschiavo/

• • The Mae West Blog celebrates its 15th anniversary • •
• • Thank you for reading, sending questions, and posting comments during these past fifteen years. Not long ago, we entertained 3,497 visitors. And we reached a milestone recently when we completed 4,200 blog posts. Wow!
• • By the Numbers • •
• • The Mae West Blog was started fifteen years ago in July 2004. You are reading the 4289th blog post. Unlike many blogs, which draw upon reprinted content from a newspaper or a magazine and/ or summaries, links, or photos, the mainstay of this blog is its fresh material focused on the life and career of Mae West, herself an American original.